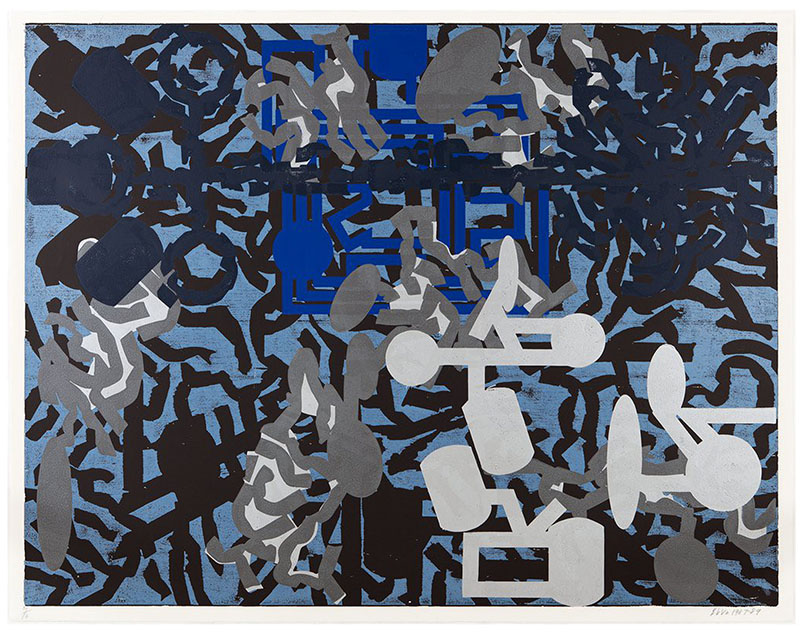 Carolina Nitsch Project Room is pleased to present an exhibition of works on paper by Barry Le Va. The works in this show are from the late 80’s and early 90’s and relate to his Sculptured Activities series, which represent various conceptual possibilities related to his sculptural installations. The black and white drawings and collages are created in pencil, charcoal and ink, while the prints are multi-colored, layered woodblocks.

Active since the late 1960’s, Barry Le Va is often associated with Process Art and Postminimalism, which developed at this time, alongside peers such as Bruce Nauman, Richard Serra, and Robert Smithson. His early work employed delicate found materials, which appear randomly scattered across a room, but were in fact scripted with deliberate processes. The works were conceptual directives, which when enacted resulted in spatial drawings or installations.

By the 80’s Le Va’s work became more sculpturally physical; as explained in an interview he “wanted to focus on a mixture of many contexts and readings based upon fleeting glimpses of activities, elements of architecture, mental states, spatial arrangements of functional objects…” Having studied architecture before he went to art school, one can see the obvious correlation between his two-dimensional work of this time and floor plans and elevations used by architects. They act as templates that trace various arrangements, movements and processes acting as a sort of catalog of the artist’s thoughts and influences. “I look at templates as a symbolic language. If I can get the right templates, make them into the right volumes and put them together, possibly I can reconstruct through situation(s) a different, non‐art language.”

The woodcuts employ this methodology by using the same few blocks in different configurations. The blocks are reused with different colors in varied orientations highlighting a sense of chance and experimentation. In this way the entire matrix becomes a drawing tool like a stamp which is rotated and printed in different ways to create unpredictable results. Le Va’s work pushes against the notion of permanence in architecture and art and instead emphasizes transitions. “I dislike the notion of knowing there is a finished stage. In all the work, I have elements that I can constantly change: the arrangements, their spatial relationship, the content… So, in a sense, they’re never finished.”

Coinciding with this exhibition, Dia will open a yearlong survey of Barry Le Va’s early sculptural work at Dia:Beacon. David Nolan, New York will also open Barry Le Va: Part One. Drawings 1967-2017 a survey of works on paper spanning 50 years. Part Two: Sculpture will open in the spring of 2020. Barry Le Va (b. 1941, Long Beach, California) has shown extensively throughout the United States and Europe, and has been the subject of major survey exhibitions at the New Museum, New York, 1979; the Carnegie Mellon Art Gallery, Pittsburgh, 1988; Institute of Contemporary Art, Philadelphia, 2005 (curated by Ingrid Schaffner); and the Serralves Museum of Contemporary Art, Portugal, 2006.