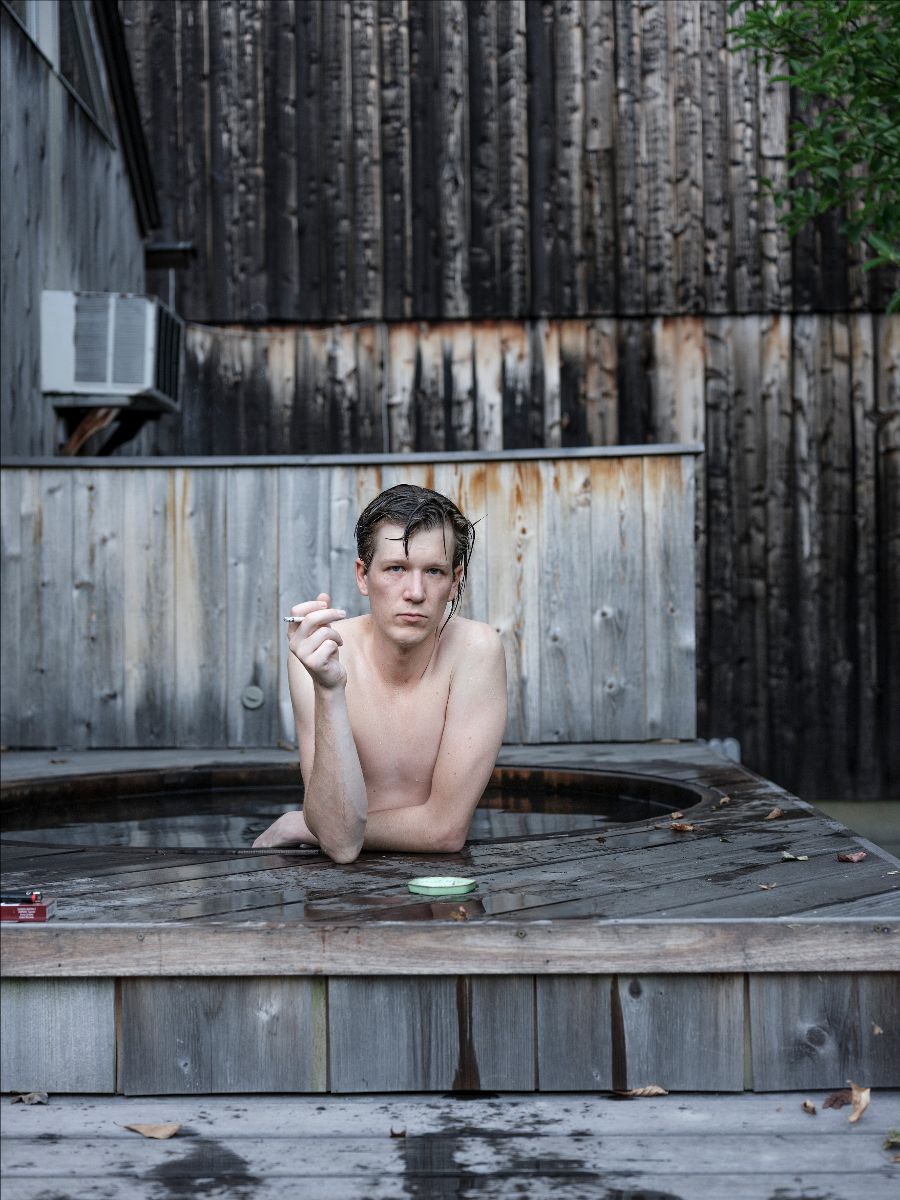 Albrecht Fuchs, "Egan Frantz, Fairfield, Connecticut 2019", C-Print, 52,5 x 39,4 cm (framed). "The German photographer Albrecht Fuchs, born in Bielefeld in 1964, has a discreet way of portraying people. He seems to almost tiptoe towards them - they are mostly artists, but he also photographed Joschka Fischer or Isabella Rossellini - and he seems to approach them without much fuss in order to point his camera at them from a respectful distance. It looks almost politely Asian, at the same time clear and precise. […] Whether the designer Dieter Rams is in his home near Frankfurt, whether Ennio Morricone is sitting on the sofa of his baroque overloaded living room in his shot from 1994 or Mike Kelley between cacti and amaryllis in Los Angeles - there is a tense calmness in all these pictures, a strange density and concentration, as if the people you see are thinking of the secret that defines them - and it shows the elegance of this photographer, who does not try to snatch it from them." Johanna Adorján, from the article "The New Courtesy" in the FAS

"There is a wide field between documentary observation and staged homage and Albrecht Fuchs has succeeded in developing his own stance that focuses on the relationship between model and photographer [...] Fuchs does not fix a smile on their faces. People look seriously and mostly sympathetically. With a slightly distant expression they look directly into the face of the viewer. And we as viewers scrutinize the person portrayed precisely, scan their surface and, thanks to the name and date stated in the title, are able to experience a moment in the life of these people, with a documentary guarantee of authenticity for this moment." Georg Elben

In his second solo exhibition at Nagel Draxler, Albrecht Fuchs combines new portraits by artists such as Keren Cytter, Charline von Heyl, Raymond Pettibon and Egan Frantz with older works, some of which have not yet been shown, such as portraits by Kader Attia in Boston 2007 and Martin Kippenberger in Cologne 1995.

Albrecht Fuchs lives and works in Cologne. Most recently, his work has been in group and solo exhibitions at the Kölnisches Kunstverein, Kunstmuseum Bonn, Kunsthalle Nürnberg and Oldenburger Kunstverein, among others.
In autumn the Museum for Photography Braunschweig dedicates a larger solo exhibition to him.