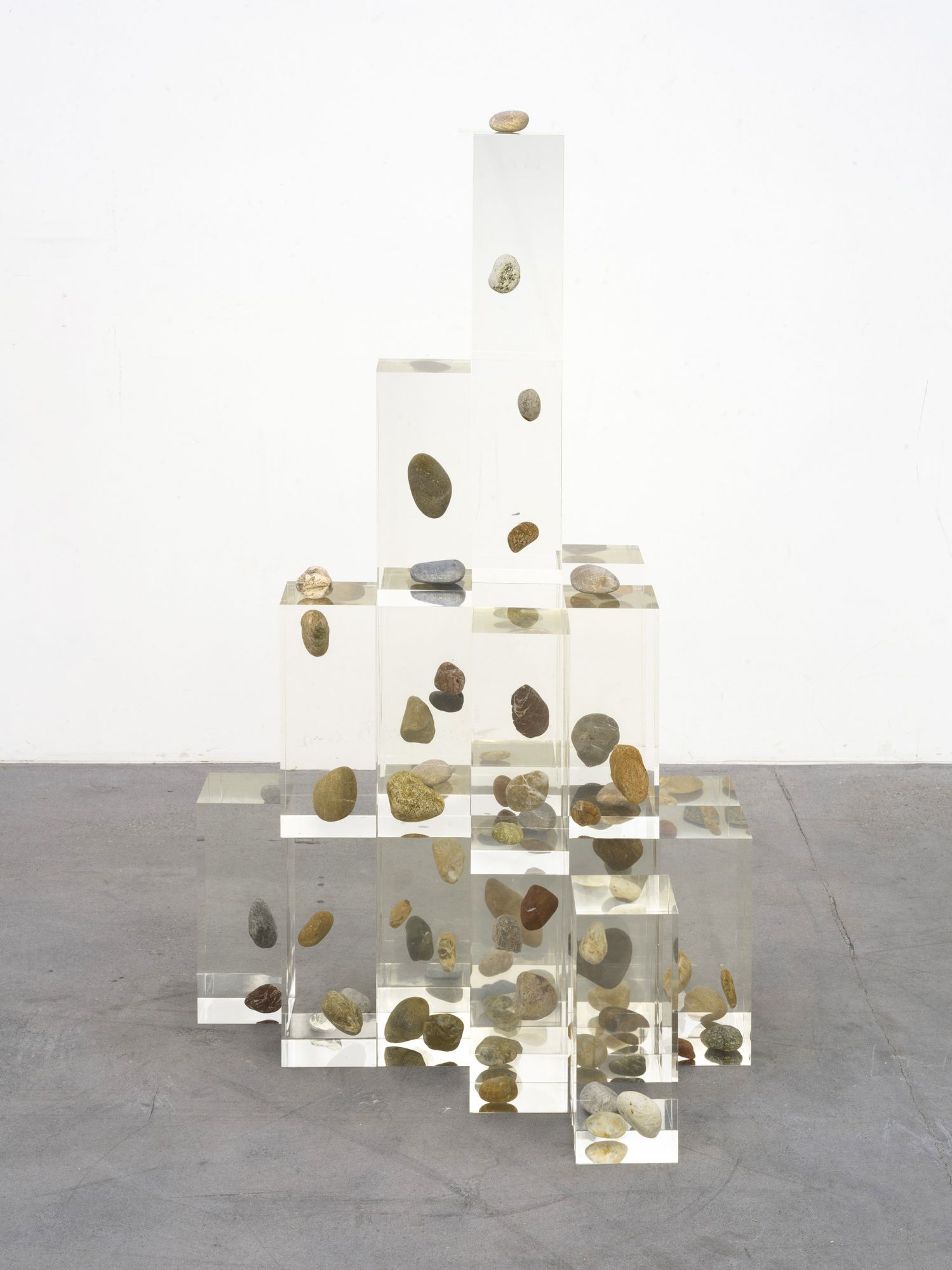 This double exhibition by KÖNIG SEOUL and Pace Gallery, Seoul includes more than thirty of the latest works by Alicja Kwade

Her first solo show in the Korean capital includes a new series of watch-hand works on paper, that continue her exploration of the processes by which we perceive and construct reality.

Two raindrops fall onto water. The apparent order is immediately set in motion by the impact. Waves and patterns of interference emerge, gradually changing with time. For a short while, the water ripples outwards in perfect, concentric circles that become fainter and fainter the further they spread. The ripples continue dispersing the impact energy until the water appears to return to its original state. The surface gravitates back to its diffuse balance, bouncing off the edges of the piece as though from the sides of a basin.

Kwade’s new series Entropie reconstructs this process in snapshots. Like many of her works, Entropie questions our very modes of perception. Its representations reveal that the apparent order was actually already in a state of entropy from the beginning—‘entropy’ being the physical measure of disorder or, more accurately, the ‘absence of order.’ In Entropie, watch hands on paper represent the arrangement of the molecules. At any other point in time, these could also be arranged differently, as micro-conditions occur in almost infinite possible variations. Yet still randomness does not prevail. Far more, each work is located in a clearly stated point in time. The entropy steadily increases, imposing its direction on time.

The same toposes of the contingency, conditionality and constructedness of our perceptions also appear in other works in this exhibition. Realities run in parallel, states are unstable, and arbitrary settlements often determine our experience of the world. This is perhaps most clearly expressed in works such as Ein Jahr (2023) or Ein Monat (July 2020), where the number of hours in the stated period is visualised by a sequence of watch hands. For the observer, discovering a signified amid the forest of hands is nigh-on impossible; instead, their attention is inexorably drawn to the countless signifiers and ultimately to the unit of time measurement itself. In these unfurled moments, time seems to stand still, and the repetitive, rhythmic waves of the watch hands show just how arbitrary and coincidental the division of time into hours and minutes ultimately is, and how starkly this settlement determines our experience of reality.

The works on show in Seoul share a common recurring motif: circular movements. These are also central to Kwade’s sculptural works. Duodecuple Be-Hide, for example, consists of twelve stones in a circular arrangement separated from each other by double-sided mirrors. Though identical in shape, they are made of different materials, such as granite, marble and erased. For the full effect of the sculpture to unfold, the observer must walk around it. Depending on the observer’s position, the mirrors appear as either a reflective or a transparent surface, confronting each stone with a doppelgänger. Different viewing angles produce different versions of reality and open up parallel worlds which show the same object in different states: doubled, halved or deleted. Kwade uses these shifts in perspective to touch on existential questions around the location of a subject within a space. Here, too, time and movement are linked: the fact that the arrangement of the twelve stones is reminiscent of a clock is no coincidence.

Ultimately, the works on show in Sometimes I Prefer to Sit on a Chair on the Earth Surrounded by Universes are tools by which to explore our own sensory perceptions. They open up cracks through which we feel we can sense anew the conditionality of the world around us and our place within it. But the cracks also reveal to us the limits of our perceptions: whatever we do, we will always be a part of the system we are trying to observe.

Given this realisation, it would be easy to fall into nihilism—but we can also choose to carry on trying. In Siège du Monde, Kwade insinuates with a touch of humour that we may well dream of sitting on the globe and thinking about the universe. The chair in this piece seems to have been wedged over an earthy red rock and might also offer a vantage point from which to view the sculpture All at any Time. This comprises nine ceramic objects painted in shiny black and shaped like intertwining chess pieces. Though completely immobile, they appear to rotate and influence each other. The body of one determines the shape and movement of the next in a complex system of interdependencies. All at any Time references various theories on the history of the universe, from the Big Bang to the present day, and with it the exhibition comes full circle: we find ourselves exploring the hypothesis proposed at the start, which states that as we move into the future, entropy will inevitably increase. The universe is becoming more and more disordered, and gradually the visitor comes to realise that actually, everything could be quite different from the way it is.