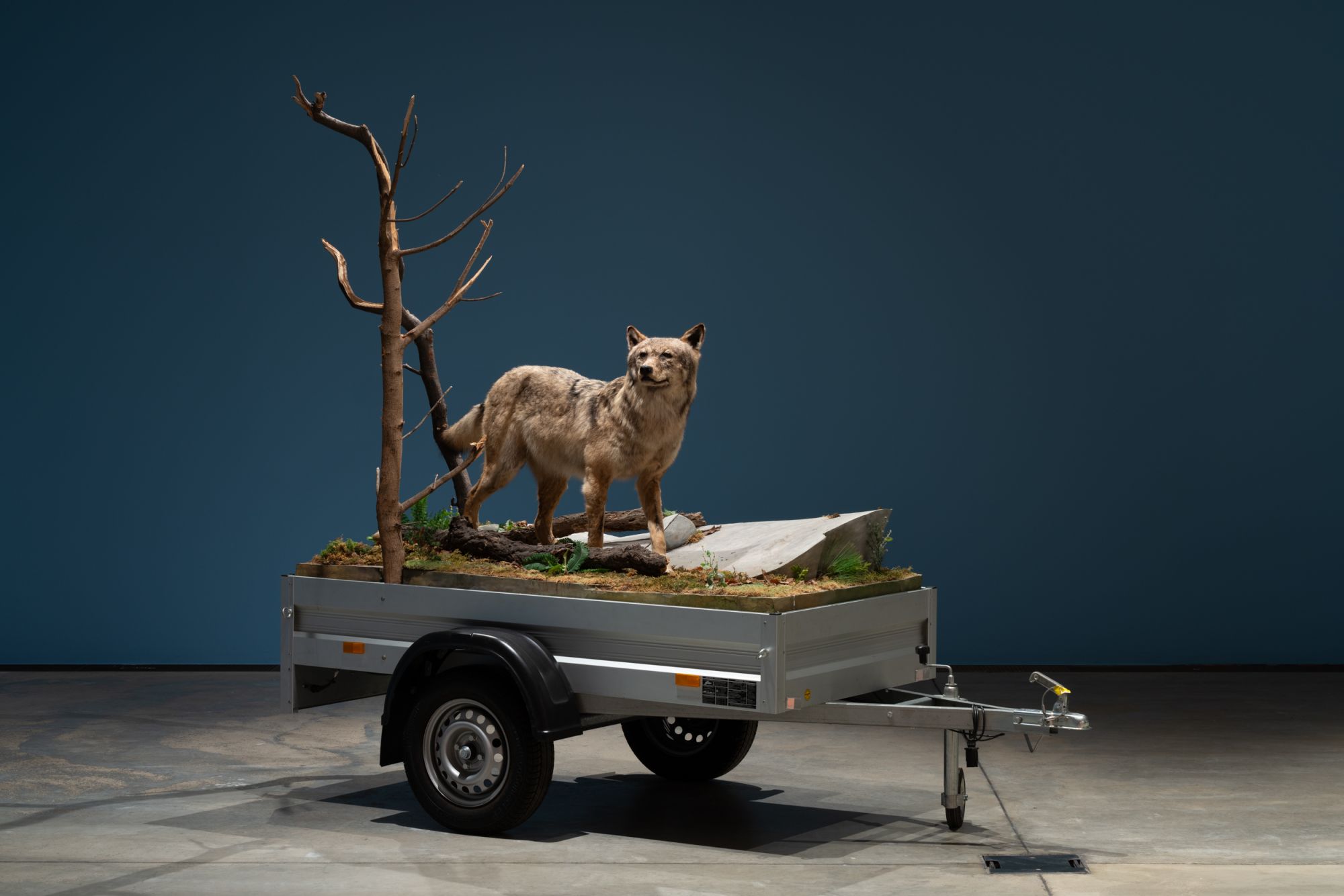 ARKEN is swarming with fur and paws. Join us in an animal kingdom of art full of beautiful, strange and incredible creatures.

Have you ever seen a full-grown elephant float? Artist Daniel Firman lets us experience precisely such a spectacular dream vision at ARKEN’s major exhibition Animals in Art. The exhibition explores and unpacks the intense preoccupation of animals seen in contemporary art these years. Thirty-four international artists, including three artist duos, offer their takes on our relationship with the other species with which we share the globe. The works explore various connections between humans and animals as played out in the Western world’s consumption patterns, storytelling and outlooks on nature views. At the same time, the works are a tribute to the amazing animals – and a cry of concern urging us to consider their future under human domination. Loving and cruel

Several of the artists featured in the exhibition investigate our close relationship with pets and what happens when we are seduced by cuteness. From Martin Eder’s giant paintings of adorable internet kittens to Annika Eriksson’s nostalgic album filled with pictures of animals that someone once loved dearly. Close and familial ties to animals give rise to love, joy and comfort, but can also be cause of worry – and of sorrow when the animals die. David Shrigley’s stuffed cat, holding up a sign with the words ‘I am dead’, offers us a morbid and humorous confrontation with death while also highlighting the surreal absurdity of stuffing animals to make them seem alive. The exhibition also gives visitors the opportunity to listen to Sophie Calle’s triple album Souris Calle (2018), which contains a wealth of music from famous musicians such as Bono, Pharrell Williams and Jean-Michel Jarre, all written as a tribute to her late cat Souris.

Close and familial ties to animals give rise to love, joy and comfort, but can also be cause of worry – and of sorrow when the animals die.

See yourself through the animals
Animals are everywhere in myths, fables and fairy tales, in religious writings and in cartoons. In our narratives, we imbue animals with human traits and speech, making them metaphors for strength and wisdom, sexuality and death, or beauty and fragility. The artists featured in the exhibition have keen eyes for the meaning and significance of animals in our quest for insight into life. They show us how to tell stories of our own lives through animals – such as when John Baldessari uses a large, white camel to interpret the Biblical story of the rich man who has less chance of getting into Heaven than a camel has of passing through the eye of a needle.

Wild animals
The dream of authentic encounters and communion with wild animals and unspoilt nature lives in most people. Yet it is mostly an impossible dream because man brings civilisation and culture with him as he goes. At the exhibition, Mark Dion’s stuffed wolf stands proudly with its paws planted in the soil of the wilderness, far removed from the safe and domesticised territory of a dog basket. However, the wolf stands, wilderness and all, in a trailer that can be hooked behind a car, allowing nature to easily and conveniently be moved around as needed. We mostly meet wild animals in zoos and circuses, where their natural surroundings and behaviours are adapted to human needs for entertainment and knowledge. In Douglas Gordon’s monumental video installation Play Dead (2003) we come face to face with a circus elephant performing various tricks in an art gallery, including playing dead. We sense the vulnerable situation in which the animal finds itself, and at the same time we are fascinated by its simultaneously graceful and clumsy beauty.

Us and the other species
In museums of natural history, the grand narrative underpinning everything is often the history of evolution and of humanity’s understanding of its own place within it. In the hands of artists, it is revealed as the narrative of how mankind, an animal species, has distanced itself from nature and the other species on Earth. Among cute animals, wild animals and human animals, countless beautiful and conflict-filled relationships unfold. Find your favourite animal and gain new perspectives on humanity’s loving and cruel coexistence with the other living beings on this planet.

None of the taxidermied animals in the exhibition have been put down to be part of the artworks.