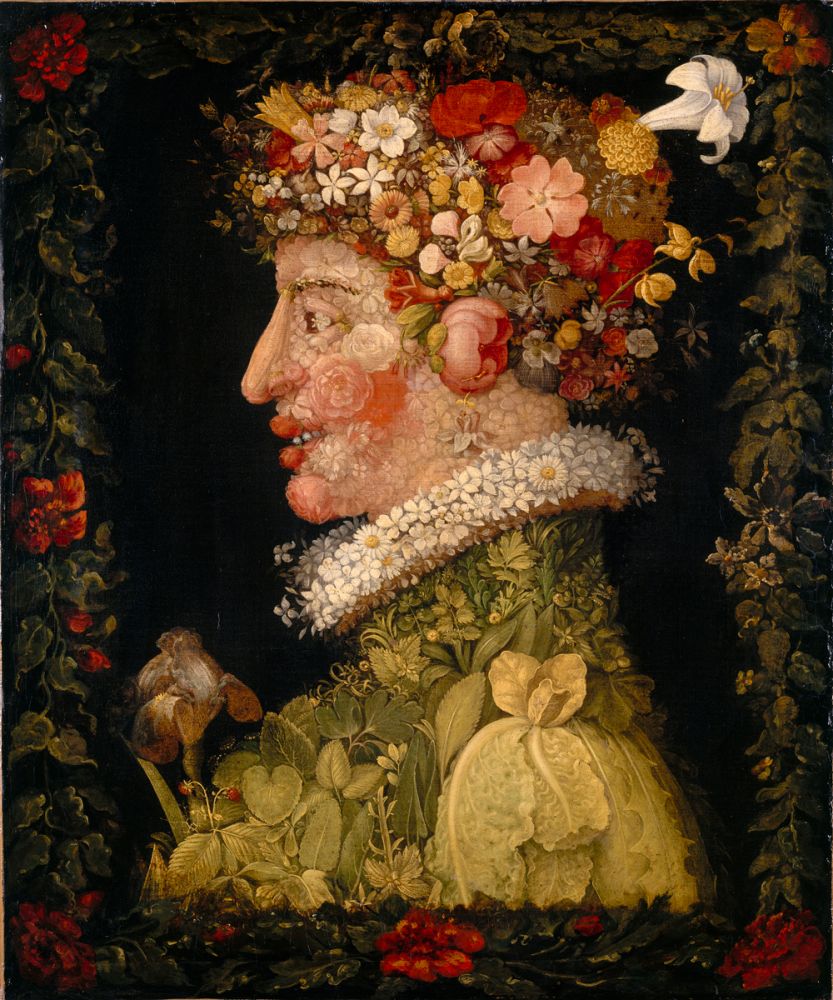 You who go, wandering through the world, Curious to see high and amazing wonders, Come here, where you will find...

These words, intended for the visitors of the garden of fantastic sculptures in Bomarzo, could just as well welcome the audience of the exhibition Arcimboldo Face to Face, presented at Centre Pompidou-Metz from May 29 to November 22, 2021.

Conceived in a dialogue between Maurizio Cattelan and Chiara Parisi, director of Centre Pompidou-Metz and curator of the exhibition with Anne Horvath, Arcimboldo Face to Face offers an unprecedented journey, away from any chronology, into the meandering thought and timeless vocabulary of this mysterious sixteenth century painter.

Although Arcimboldo’s composite portraits are now universally known, the richness and diversity of his work remains to be discovered. Giuseppe Arcimboldo (1526-1593) was an inventor and a thinker whose thoughts and works go far beyond the question of portrait painting. The exhibition shows how his work has been influencing art history for five centuries and could shed a light on a number of current philosophical and political debates.

In addition to the exceptional presentation of the famous Seasons from the Louvre and the Real Academia de Bellas Artes de San Fernando in Madrid, the show focuses on his most surprising works: the stained-glass windows he created at the very beginning of his career in the Milan Cathedral, the pen and blue wash drawings from the Uffizi Gallery for the feasts and tournaments of the Habsburg court, as well as The Librarian, which is striking for its profoundly conceptual language.

Inaugurating Chiara Parisi’s program as head of the institution, since december 2019, Arcimboldo Face to Face is a follow-up to The Arcimboldo Effect: Transformations of the Face from the 16th to the 20th Century, which was the first exhibition devoted to the artist in Italy. Held at Palazzo Grassi in Venice in 1987, it was conceived by Pontus Hultén, the first director of the Centre Pompidou, with Yasha David.

Arcimboldo Face to Face reflects the current state of art through the eyes of 130 artists, whose selection was guided by the influence - assumed, unconscious or fantasized - that the Lombard master exerts on their thinking and art. Each of the 250 works in the exhibition bears the imprint of Arcimboldo’s unique creative freedom and follows a golden thread through the centuries until the present day.

Using cellular concrete, the unconventional scenography designed by the architects Berger&Berger suggests the cartography of a citadel in which generations, geographies and media collide.

Upon entering the Grande Nef of Centre Pompidou-Metz, visitors are confronted with the experience of Mario Merz’s installation, recomposed in its three original parts for the first time since 1987 - the Tribute to Arcimboldo, Cono and the Table de Chagny – with fruits and vegetables following the rhythm of the seasons. Francis Bacon’s Head VI (1949) is presented next to Hannah Höch’s collages; Wolfgang Tillmans’ Anders (Brighton Arcimboldo) (2005) is presented next to Otto Dix’s Study in the Catacombs of Palermo (1924); Cindy Sherman’s Untitled (#155) (1985) interrogates Hans Bellmer’s Doll (1935-1936). Elsewhere in the exhibition, the frescoes of Pompeii illuminate the masks of the store where James Ensor spent his life.

Offering ample openings within its structure, the architectural space allows for the visitor to come across the new creations by Fernando and Humberto Campana, the monumental phosphorescent fountain Hills and Clouds (2014) by Lynda Benglis, the impressive Garden Guardian (17th century) - the only existing Arcimboldesque sculpture - or the secret Prague cabinet by legendary contemporary surrealist filmmaker Jan Švankmajer. Further on, Lavinia Fontana’s portrait of Antonietta Gonzalez (1594-1595) from the Royal Castle of Blois, Pierre Huyghe’s video Untitled (Human mask) (2014) and Zoe Leonard’s portraits of the bearded woman from the Orfila Museum (1991) stand alongside each other.

Just as the surrealists - who are featured in the exhibition with a selection of masterpieces from the Centre Pompidou’s collection - considered Arcimboldo as an endless source of inspiration, this face-to-face with Arcimboldo is also carried on by the contemporary scene. Recent works by Kerstin Brästch, Felix Gonzàlez-Torres, Rashid Johnson, Ewa Juszkiewicz, Cally Spooner, Hans-Peter Feldmann, and Ed Ruscha all bear witness to the importance of Arcimboldo’s vision to the education of generations of artists, from the past and the present.

In the Forum of Centre Pompidou-Metz, the installation Le désir attrapé par le masque, especially created for this exhibition by Annette Messager, unfolds in the form of a farandole of masked animals evoking the bizarre and the unknown, the ugly and the seductive, opening a reflection on hybridisation.

As the visitor wanders through these unexpected encounters, they are invited to experience, in an intuitive way, the paradoxes between the human being and the animal, the vegetal and mineral, the natural and artificial, the brutality and refinement, the invention and nostalgia, rootedness and wanderlust. As the spirit of Arcimboldo, these extremes seem more necessary today than ever to be able to navigate the complex universe of artistic creativity.

Catalogue
Designed by M/M (Paris), whose intention is to confront literally Arcimboldo, the catalogue combines essays by Chiara Parisi and Anne Horvath, co-curators of the exhibition, with those of two great art historians and specialists in Mannerism, Patricia Falguières and Antonio Pinelli, as well as a conversation with Yasha David, a historical fresco by Donatien Grau, and the complete version of the legendary essay by Roland Barthes, “Arcimboldo, or Magician and Rhétoriqueur”, published in 1978. The conclusion is entrusted to Maurizio Cattelan.

The unusual extra-large book illustrates each of the 250 works in the exhibition and accompanies them with a note written by one of the 90 different authors, including personalities from the art world and the artists themselves.

With the complicity of Château royal de Blois.