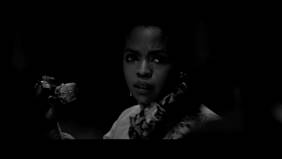 ARTHUR JAFA 9 December 2020 – 9 May 2021 In December 2020, Louisiana Museum of Modern Art will open an exhibition with the American artist Arthur Jafa (born 1960, Tupelo, Mississippi), who is considered one of the most important artists practicing today. In his work, Jafa deals with the discrepancy between the idolization and consumption of Black American culture and the status of Black Americans in American society. The exhibition, which has been in the pipeline for two and a half years, will be the biggest presentation of Jafa’s work to date.

Since childhood, Arthur Jafa has cultivated a mania for cutting pictures out of books and magazines and rearranging them into new constellations in his own picture books. This remains the point of origin for his work. The artist presents us with a wealth of ready-made material recombined to create new meaning in films, photographs and installations. Much of his material is sourced from popular culture, news broadcasts and home videos on the internet. Indeed, Jafa’s preferred source of inspiration is YouTube.

The exhibition features key filmic works, including a new video work made for the occasion, alongside a number of works in other media, several of which are also made specifically for this exhibition. From Louisiana’s perspective, Jafa’s oeuvre extends the American tradition of political Pop art, which is a cornerstone in Louisiana’s collection via artists like Warhol, Rauschenberg, Fahlström and Kogelnik.

Made around the time of the election of Donald Trump, the video is a virtuosic master cut of viral videos and historical footage – from images of Black American celebrities who have excelled, like Barack Obama and Serena Williams, and past giants like Martin Luther King to news clips and handheld shots of police violence against Black Americans, set to the Kanye West song Ultralight Beam. The message is both profoundly moving and scathingly critical. An instant classic of American art, this work is impossible to ignore for anyone interested in American art history. It will of course be featured in the Louisiana exhibition.

Misery both defines and limits who we are Far from unique, the death of George Floyd is one of many recent incidents, which have been video-documented in graphic detail and consequently sparked a worldwide outcry. For Black America this is daily life, nothing new, a fact of life that sets its stamp on Jafa’s work.

The discrepancy between the glorification of Black American culture (particularly music) and the status of Black Americans in American society is the focal point of Jafa’s work. In his text My Black Death, he writes, “The central conundrum of black being (the double bind of our ontological existence) lies in the fact that common misery both defines and limits who we are. Such that our efforts to eliminate those forces which constrain also functions to dissipate much which gives us our specificity, our uniqueness, our flavor by destroying the binds that define we will cease to be, but this is the good death (boa morte) to be embraced.”

About Arthur Jafa:
Arthur Jafa started out as a cinematographer. He has worked with filmmakers like Spike Lee and Stanley Kubrick. Back in 1991, he won the award for best cinematography at the Sundance Film Festival for Daughters of the Dust, directed by Julie Dash. In recent years, Jafa has directed music videos for an array of praised American artists, including Jay-Z, Solange Knowles and, most recently, Kanye West, for the song Wash Us in the Blood (2020).

Last year, Jafa won the Golden Lion at the Venice Biennale, affirming his prominent position in the global art world. A standout at Venice, his video work The White Album pairs humour with brutal reality to contrast white America’s blind entitlement with the grim realities of Black Americans. This work will also be shown at Louisiana.

Across his different practices, Jafa is a respected speaker and panellist. Back in the early 1980s, during his years at Howard University, he was known for his fondness for telling epic-length stories and giving epic-length answers to questions.

Jafa is represented in Louisiana’s collection with the video work APEX (2013, video (colour and sound), duration 8:12 min.), acquired in 2019 with funding from the Museum Foundation of 7 December 1966 and donations via louisiana.dk.

The exhibition is curated by Mathias Ussing Seeberg.

The exhibition is supported by the New Carlsberg Foundation.