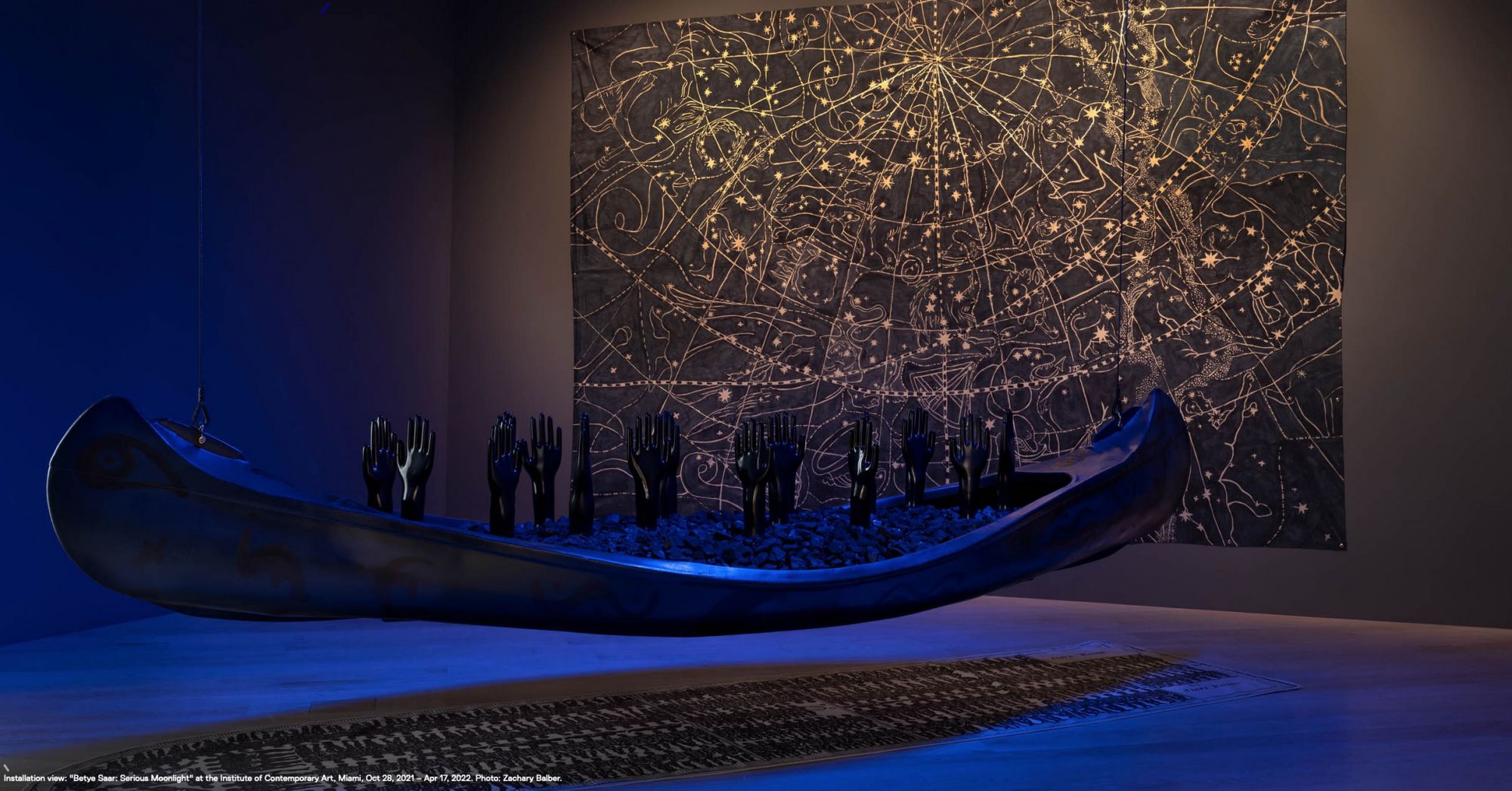 Rooted in the artist’s critical focus on Black identity and intersectional feminism as well as the racialized and gendered connotations of found objects, Saar’s installations expand on her celebrated repertoire and offer broadened insight into ritual, spirituality, and cosmologies in relation to the African American experience and the African diaspora. Saar’s intimately scaled works of the 1960s and 1970s–poignant examinations of race and gender through assemblages of readymades and found objects–became icons of Black feminist art. In works like The Liberation of Aunt Jemima (1972), Saar altered and augmented found, commercially available objects—in this case adding a rifle and a raised fist to the familiar stereotypical commercial emblem—in order to highlight and dismantle racialized images that pervade everyday life.

Audiences have rarely had the opportunity to encounter the artist’s radical installations, many of which have been recently rediscovered and will be exhibited at ICA Miami for the first time in decades. Influenced by research trips to Haiti, Mexico, and Nigeria undertaken by the artist in the 1970s, these immersive works explore concepts of ritual and community through both cultural symbols and autobiographical references. Saar’s installations combine charged objects to create rich, narrative worlds. The exhibition includes the significant installation House of Fortune (1988), an ominous scene featuring a card table, tarot cards, and Vodou flags as a meditation on spirituality. The Ritual Journey addresses traditions of death and mourning, as does the artist’s altarpiece, Wings of Morning (both 1992). In this selection of works, Saar draws from the history of the African diaspora and the African American experience to create tangible and powerful monuments that profoundly influenced artists such as David Hammons, Maren Hassinger, and Senga Nengudi.

Boldly addressing questions of race and gender in her art and activism, Betye Saar (b. 1926, Los Angeles) has been a pioneer of readymade art on the West Coast and Black feminist art in the United States since the 1960s. Her revolutionary work has been exhibited in solo and group exhibitions throughout the United States and around the world, including, most recently, the retrospective “Betye Saar: Still Tickin’” at the Scottsdale Museum of Contemporary Art, Arizona, and Het Domein, Sittard, The Netherlands; the group show “We Wanted a Revolution: Black Radical Women, 1965–85” at the Brooklyn Museum, New York; and the monumental traveling group show “Soul of a Nation: Art in the Age of Black Power” at the Tate Modern, London; Crystal Bridges Museum of American Art, Bentonville, Arkansas; Brooklyn Museum; The Broad, Los Angeles; and the M. H. de Young Memorial Museum, Fine Arts Museums of San Francisco. Current exhibitions include solo presentations at the Museum of Modern Art, New York (MoMA), dedicated to her prints, and at the Los Angeles County Museum of Art (LACMA) focused on her sketchbooks and related works. Saar’s works are held in more than sixty museum collections, including the Detroit Institute of the Arts; MoMA; LACMA; Smithsonian American Art Museum, Washington, DC; Walker Art Center, Minneapolis; and the Whitney Museum of American Art, New York, among many others.

The exhibition is organized by ICA Miami and curated by Stephanie Seidel, Curator.