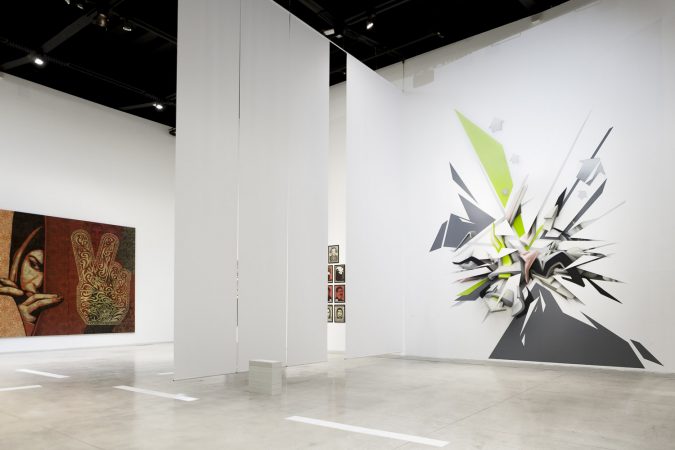 A multimedia exhibition that explores the history of the street art
at MACRO – Museum of Contemporary Art in Rome.
May 7 – October 1 2017

“There is only one international vanguard that brings together the young, the marginalised and minorities in the amniotic sac of globalization: Street Art. It has many names but only one mission: to transform the city into an open-air museum.” – Paulo Lucas von Vacano

Cross the streets is a multimedia exhibition that explores the history of the street art phenomenon, the most globally influential art movement of the last 40 years. For the first time in Rome, a counterculture — by now part of the mainstream — enters a museum, the MACRO Museum of Contemporary Art in Rome. The exhibition will be on display from May 7th to October 1st 2017. Street art is a unique avant-garde that unifies youth, minorities, and the marginalized in an era of globalization. Cross the Streets at the MACRO will present a comprehensive introspection on street art through a kaleidoscope of urban art movements, including graffiti, stencil art, pop-surrealism, photography, and film.

As studies in the last decade have shown, street art in its various forms, from graffiti writing to mural painting, has a deep influence on the collective imagination. Originating as an underground movement of youthful protest, street art has positively invaded advertising, the fashion industry, and the world at large. Cross the Streets aims to express the power of this complex and fascinating movement, highlighting its pioneers and its impact on everyday life. The exhibition will also examine street art’s role in the history of Rome from antiquity to the modern day. Cross the Streets masterfully historicizes the street art movement. This exhibition project, curated by Paulo von Vacano, will fill the entire museum and include over 150 works.

A second exhibition, ― Writing a Roma, 1979-2017, curated by Christian Omodeo, is dedicated to the relationship between Rome and Writing. The show focuses on graffiti writing in the Roman sphere through a timeline beginning in December 1979 when the Medusa Gallery presented the first graffiti exhibition outside of the U.S. With works and photography by: Lee Quinones, Fab 5, Henry Chalfant, Napal, Brus, Jon, Koma, Rebus, Imos, Valerio Polici, Stefano Pane Monfeli, Joe Franceschi, Nico Proietti, Alessandro Scarful Maida, Emiliano Stand Cataldo. A fanzine will be published for the occasion of Cross the Streets, containing interviews, art news as well as related activities and services. A Cross the Streets catalogue will also be produced by the roman publishing house DRAGO. The catalogue will contain photographs of every item on display accompanied by texts and behind-the-scenes details on the work of the curators and museum staff.

Parallel to the exhibition there will be a series of lectures on topical issues related to street art and urban art, such as artists’ rights, issues of ownership, legality and conservation, as well as iconography, semiotics in graffiti writing, and the relationship between the artist and the spectator. The series will run from May to October.