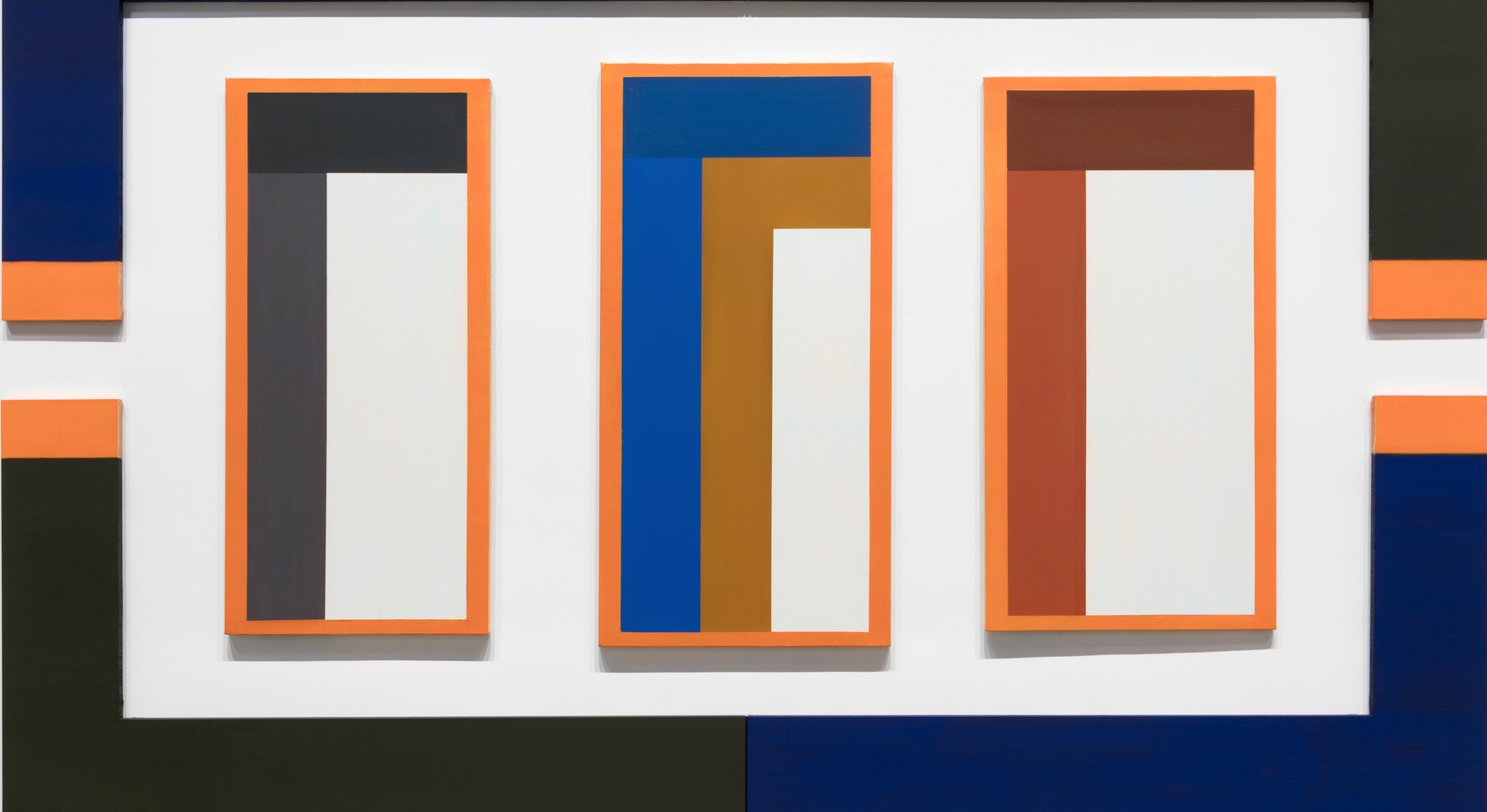 Judd Foundation is pleased to present David Novros – Paintings on the ground floor of 101 Spring Street. The two works in the exhibition, Boathouse (2016) and Untitled (Graham Studio Mural II) (2006), are large, polychromatic paintings, described by the artist as portable murals. These works relate to imagery that Novros first explored in a fresco he made for the second floor of 101 Spring Street in 1970 and are examples of his ongoing commitment to what he calls “painting-in-place.”

Untitled (Graham Studio Mural II) was one of five works Novros made for the sculptor Robert Graham’s home and studio in Venice, California, and is one of two that are extant. Boathouse, a multipartite painting in oil and murano, was made after a related mural cycle conceived for a boathouse in Middleburgh, New York was destroyed. These works demonstrate Novros’s ongoing interest in structural wholeness, the interplay of color, and place.

This exhibition presents new opportunities for considering Novros’s portable murals within the context of his permanent fresco at 101 Spring Street, and for seeing anew the importance of place and permanence to his work more broadly. Jörg Daur, Deputy Director of the Museum Wiesbaden, describes Novros’s paintings as “distinguished by an interplay with each place that fundamentally allows this place as such to emerge.”1

In 1970, two years after Donald Judd purchased 101 Spring Street, he asked Novros to create a work for the second floor. Judd and Novros shared an interest in permanence, and for the relation between a work of art and the architecture in which it is exhibited or for which it was made. As Novros recalls, “Judd was using that space as his laboratory to center on the belief that the placement of a work of art was critical to its understanding. He was thinking of the various paintings and sculptures of the building as a ‘permanent installation.’ It worked out well for both of us, because it suits my concept of how a work of art could exist in an architectural space.”2 This work, restored by Judd Foundation in collaboration with the artist in 2013, was Novros’s first true fresco.

In conjunction with the exhibition, Judd Foundation will host a reading by poet and translator Bill Porter (Red Pine) on Thursday, October 13, and a conversation between David Novros, Flavin Judd, Artistic Director of Judd Foundation, and Dr. Matt L. Levy, Associate Professor of Art History, Music, Theatre, and Visual Arts program at Penn State Behrend, on Thursday, November 10. Both events will be held at 101 Spring Street.

About David Novros
David Novros (b. 1941, Los Angeles, CA) is known for both his large, abstract paintings on irregularly shaped, multipartite canvases and also site-specific works that push beyond internal pictorial space to engage the surrounding architectural context. His work was first exhibited in a two-person show with Mark di Suvero in 1965 at the Park Place Gallery, and was included in the hugely influential Systemic Painting at the Solomon R. Guggenheim Museum, New York in 1966. His work has been exhibited in prominent venues, including the Museum of Modern Art, New York; the Museum of Contemporary Art, Chicago; the Whitney Museum of American Art, New York; the Los Angeles Museum of Contemporary Art; the Dallas Museum of Fine Art; and the Museum of Fine Arts, Houston. Novros’s works are owned by international institutions, with significant collections held at the Museum Wiesbaden, Germany, and the Menil Collection, Houston. In 2021, Novros’s immersive installation of painted rooms created for the 1975 exhibition Marden, Novros, Rothko: Painting in the Age of Actuality was reinstalled for the first time at the Moody Center for the Arts at Rice University, Houston, TX. Novros lives and works in New York City.