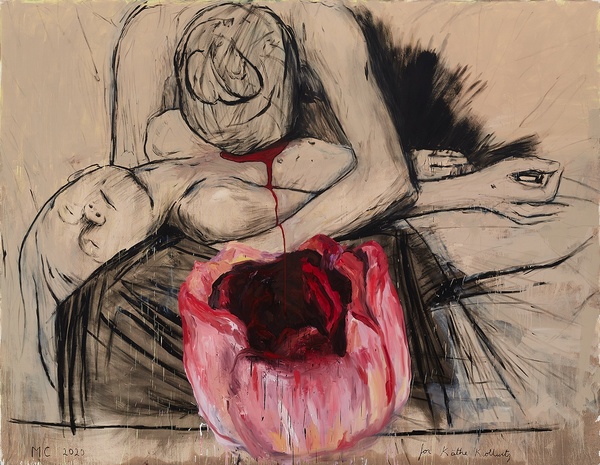 “Looking at Käthe Kollwitz‘ work makes me feel less alone. She knew about the consequences of what it means to be human.”
Enrique Martínez Celaya

Enrique Martínez Celaya (*1964) was just a teenager when he first discovered German culture. It may seem surprising that an artist born in Cuba, who grew up in Spain and Puerto Rico and entirely outside the realm of German influence, is to this day so fascinated by the “Land of Poets and Thinkers.” Whereas most people would rate Nietzsche, Brecht and Hegel as heavy duty, this young Latino ravenously devoured the work of German writers and philosophers, and in so doing he stumbled across Käthe Kollwitz (1867—1945). The most famous female German artist of all, whose work is situated between Realism and Expressionism, became an elective affinity and an inspiration for his own “being an artist in this world.” For some years now, his older colleague (or at least one of her self-portraits, which now hangs in his studio) has looked over his shoulder as he works.

Martínez Celaya shares this passion for Kollwitz with Gudrun and Martin Fritsch, who have promoted her oeuvre in two ways. The Berlin-based husband-and-wife team have not only built a significant collection of her art but were also managing the affairs of the private Käthe-Kollwitz-Museum in Berlin for many years.

The Fritsch Collection served Martínez Celaya as a springboard for a cycle consisting of nine paintings, two works on paper, and a sculpture. Most of these works are adaptations of privotal drawings by Kollwitz that testify to her profound humanism and her desire to have a social impact. In times marked by a global pandemic and refugee crisis, Martínez Celaya brings her humanitarian message into the present with a new intensity. The result is a homage in a double sense: to the artist who played such a decisive part in his own artistic formation and to the two collectors who have made such a significant contribution to the knowledge and appreciation of her work.