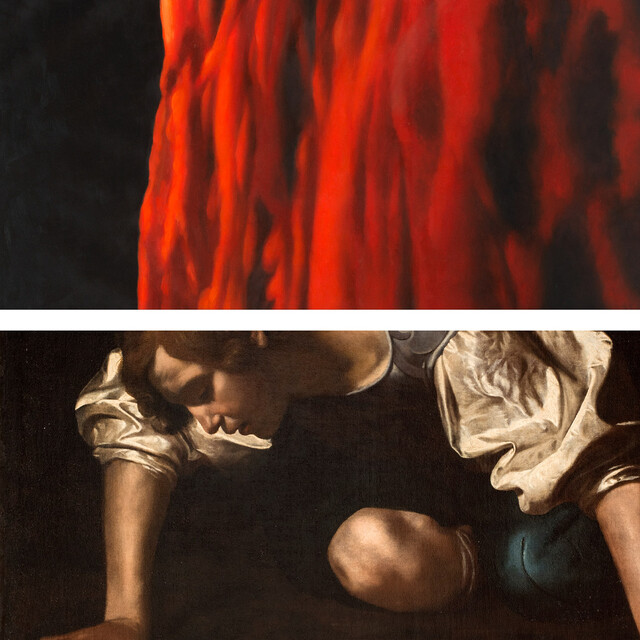 Espressioni. The Proposition and Anne Imhof. Sex are exhibitions of our time.

Espressioni. The Proposition presents the works of over 50 artists from different historical periods and from many parts of the world, who exemplify highly expressive (and sometimes expressionist) forms of art. The artists range from exasperated individualism to romantic melancholy, from deformed interpretations of the body and of the everyday to fierce social critiques. The works span millennia, from the Chauvet Cave paintings (via Werner Herzog) to artists from Simone dei Crocefissi (1330-1399) and Dosso Dossi (1468-1542), to Caravaggio, Artemisia Gentileschi and Francisco Goya (1746-1828), from a Ngil Mask of the Fang community (pre-1930) to masks by Beau Dick (1955-2017), from Pablo Picasso (1881-1973) and George Grosz (1893-1959) to William Kentridge (b. 1955), Anna Boghiguian (b.1946) and Lynette Yiadom Boakye (1977). Espressioni. The Proposition is the first part of a two-part investigation into expressionisms. It will be followed in late 2021 by Espressioni. The Epilogue, which will include other key historical artists, such as William Turner and James Ensor, as well as new and existing artworks by artists such as Grada Kilomba, Agnieszka Kurant, Lina Lapelyte, and Marianna Simnett.

They were ready to be seen and experienced on November 5th, when the exhibitions were scheduled to open. We installed them while the Museum was open to the public after the first lockdown this year in Italy from last March through May 2020. Due to the coronavirus pandemic, causing new lockdowns in Italy and across the world, these exhibitions have been postponed until 2021. There is something sad in this fact – the exhibitions are installed but locked, dormant or in hibernation, waiting to reawaken when audiences can visit them – yet this also gives the artworks a very special kind of aura.

It is as if they felt the need to verify their own vitality in the face of the world’s difficulties.

However, in this time of masks and screens, on December 12, Castello di Rivoli will host a conference. It will be online. It is called Digital PTSD. The Practice of Art and Its Impact on Digital Trauma. The isolating experience of lockdown is placing renewed emphasis on the possibly traumatic effects of digital overload on embodied subjectivity and the social body. Leading international scientists, artists, thinkers and curators will present their research and reflect on whether a form of digital PTSD might be emerging, through the alliance between the traumatic separation of bodies in physical distancing and the consequences of online life. The conference considers our growing and obsessive dependence on technology as a threat to our liberty, autonomy, wellbeing and our very existence as physical agents, and thus as a cause of severe psychological distress. Although it may seem counter-intuitive to stage such a critique through online platforms, it is crucial that, as a museum, we ask critical questions and attempt to contextualise the sudden pivot toward increased digital activities at this time of enforced closures.

Since its origins, art has recorded the great changes of the world, proposed alternative models of knowledge and visions that refuse a passive acceptance of progress as inherently positive. There are many recognizable moments in which scientific and technological revolutions run parallel to expressionist developments in art, starting with the discovery of fire and cave paintings, to continue with the great upheavals brought about by the acceleration of transport and the Copernican revolution, which can be glimpsed in the passage from the Renaissance to Mannerist art, up to the restlessness of the Baroque painting of Narcissus (1597-1599) by Caravaggio or Samson and Delilah (c. 1630-1638) by Artemisia Gentileschi, both included in Espressioni. The Proposition.

These works entertain a strong dialogue with Sex, the exhibition by Anne Imhof that occupies contemporaneously most of the area of our Manica Lunga exhibition space. Through paintings, sculptures, performances, architectural elements, music and drawings, the works of Anne Imhof reflect the tensions of contemporary life, in which physicality is heavily mediated by digital communication. The expressions that have been exacerbated by our digital culture, including narcissism and alienation but also profound melancholy and emotional torment, are essential components of her work. Historical paintings such as Gentileschi and Dosso Dossi become characters that inhabit her exhibition, in a poetic ensemble of elective affinities.

Sex is the artist’s first solo exhibition in an Italian museum and it was co-commissioned with Tate Modern and Art Institute of Chicago. Here, and now, it will be different. Imhof has responded to the unique space of the Manica Lunga, a long 17th-century picture gallery with 30 windows, 15 on each side. She thus designed 30 large glass panes, context-specific sculptural elements that were first shown in a different shape at Tate Modern. Now they have come home and are settled comfortably in their space as originally planned—like vertebrae of a spine running through the entire space. The exhibition is now defined by this new work titled Untitled (Glass Wall), 2019-2020, comprising glass panels mounted on steel bases. Untitled shapes yet denies their function, standing as a discontinuous, traversable structure defined by constant transparency. This work runs like a spine through the long gallery space of the Manica Lunga, dividing it into two symmetrical narrow corridors that host her other works, as well as the historical paintings of Espressioni. Additionally, a large body of new drawings, made by the artist in her studio in Berlin during the lockdown, inhabit the space like ghosts. What emerges in these drawings is attention to the relationships between humans whose gestures can define and reconstruct our space.

The title Sex is a floating signifier, hard to search on google because it is so generic and apparently predictable. A new soundtrack that is based in parts on material used in the exhibitions at Tate Modern and the Art Institute of Chicago was developed specifically for the Manica Lunga and plays in the empty space of the not-yet-open exhibition in Turin, potentially luring the visitors into the space. Everyday. It performs a concert for the lonely paintings themselves, as they wait for the visitors to return after the virus, and as they wait for Imhof’s performers to inhabit the space with a farewell performance.

Due to the pandemic, social gathering–one of the primary elements of Imhof’s performances–is prohibited. Hopefully, before the exhibition ends, there will be a farewell performance when Caravaggio’s painting will be taken down, and there will be a performance at Palazzo Barberini in Rome to celebrate the painting’s homecoming.

The farewell aspect of this performance is not insensitive to the bodies of the victims of Covid-19, yet there is no explicit reference.

The physicality of the performers’ absent bodies is evoked through the prominent role given to music through a new soundtrack composed by Imhof, Eliza Douglas, Billy Bultheel, and Ville Haimala for the exhibition.

It is a concert, perhaps.

Marianna Vecellio and Fabio Cafagna, together with Anna Musini and thanks to conversations with Marcella Beccaria, collaborated with me on the drafting of Espressioni. La Proposizione. Marcella and I also drafted Anne Imhof. Sex. Chiara Bertola led the installation. Many helped by making or lending artworks, others by supporting the exhibitions. I thank them all.

On specific request by Imhof, the exhibition includes Caravaggio’s Narcissus. He crouches and gazes into his darker, older, muddier self, in an eternal mirror and constant stage.