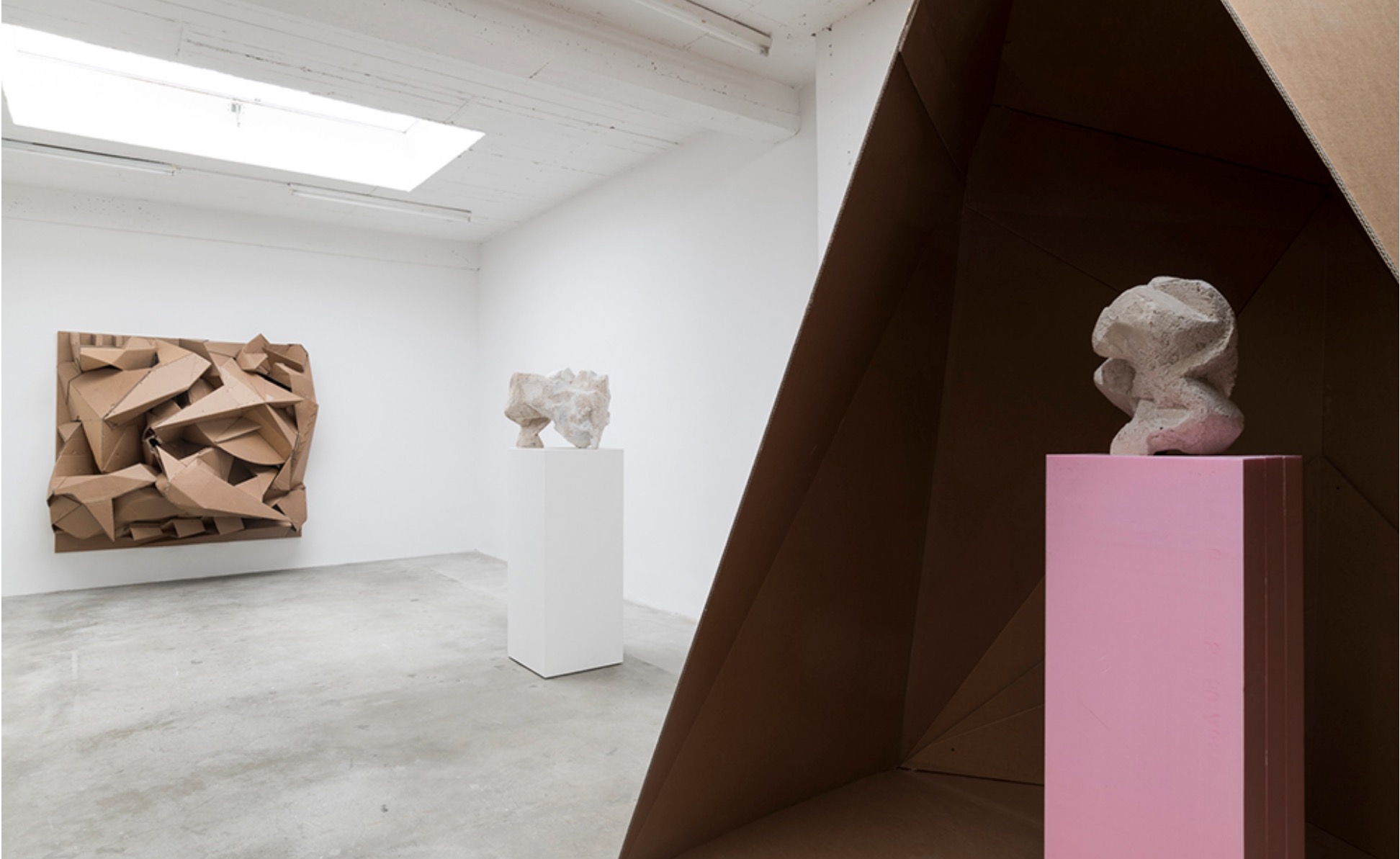 When we look at a sculpture, it can seldom be conceived of without the space surrounding it. It opens the dialogue of forms and lets the works refer to each other almost by themselves and seem harmonious in the ideal environment of their creation—the studio. When they are exhibited, the question arises as to whether they can be successfully transferred to the gallery space without any further intervention. How does a new space in its architectural presence and the energies of the place alter the effect of what has been made, and can this be counteracted? And how does this affect our view on the works?

Against the background of these questions, in his current exhibition, Florian Baudrexel arranges three different presentation modules in the gallery space and explores the possibility of designing an environment—an interaction between work and architecture. The exhibition begins with a sculpture that slowly rotates on a display built into the gallery window facing the street and thus a conscious design of the place where the idealized space of a gallery turns toward the outside world—an environment that not only implies its viewing as contemplation due to its architectural layout, but also demands the active projection of our impressions through its exhibition in a location designed for it. As a result of Baudrexel’s interventions in the simple design of the display, the gallery window also becomes an almost stage-like architecture—a space between situation and environment in which the sculpture appropriates the specially created surrounding area as an augmentation of its pedestal.

In the main room of the gallery we encounter three very different, almost contrary-seeming architectural formulations, which seek to develop enough presence in the room so that they can build up their own sphere in contrast to the actual circumstances. While a large-scale cardboard relief on the left wall explores its own space, two architectural installations create stages for a series of new sculptures. A monumental block of cardboard with raised ends brutalistically forms a simple figure on which two cardboard sculptures and a group of plaster sculptures below are placed. It is a volume between a pedestal and a monument, the material and design of which address classic questions relating to the relationship between sculpture and display as well as the intervention of sculpture in the surrounding space. Executed as a formal counterpart to this outward-looking spatial system of reference, the “chapel,” as Baudrexel calls it, is to be understood as the vaulted covering and housing of a sculpture as a direct design of an environment—a space that offers protection and room for perception. It forms the real embodiment of the search for an environment for the works, counteracted by the sculptural echo of a relief whose parts physically occupy a place through their volume. Similar to his sculptures, for Baudrexel the built environment takes shape here in a design context—in a dialogue between the work and the frame that surrounds it, which gains presence and space from the architecture in order to create the idea of a place in which the work and the frame are interrelated.