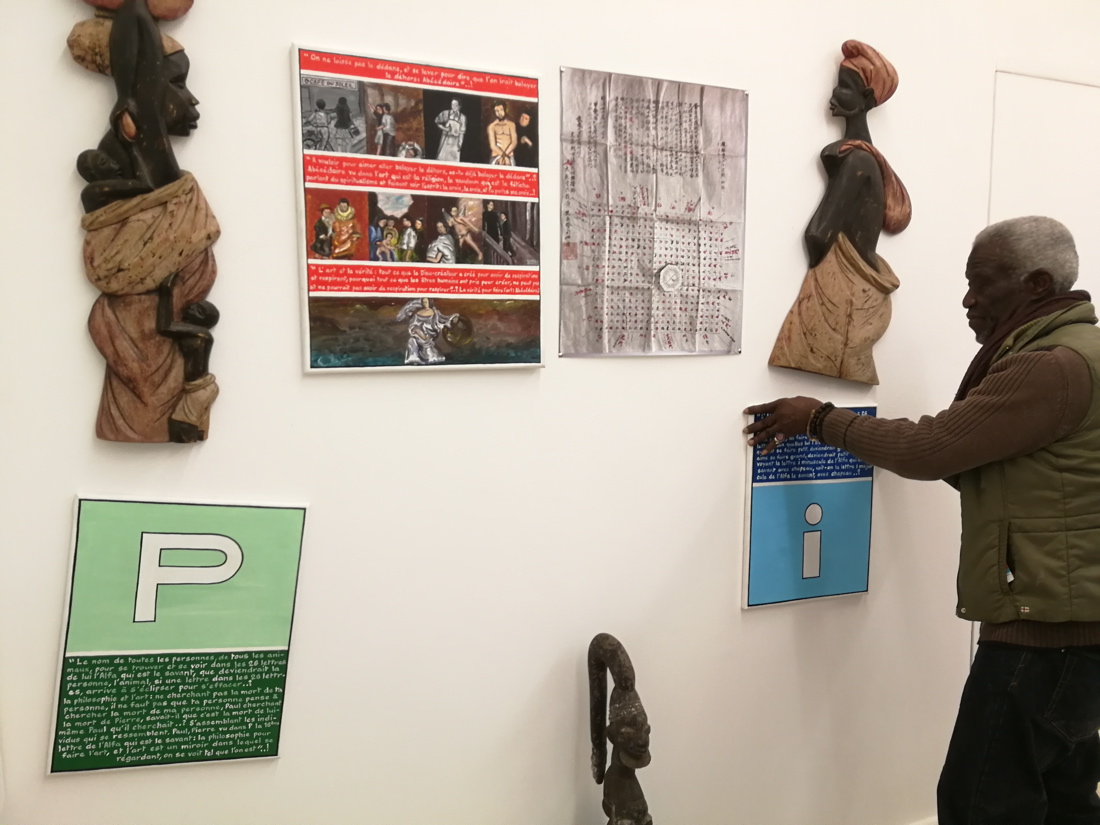 Exhibition: February 8 – April 18, 2020 Opening: Friday, February 7, 6–9 pm “L’Abécédaire de Georges Adéagbo: la civilisation parlant et faisant voir la culture”..! is the second solo exhibition by Georges Adéagbo at Galerie Barbara Wien. In this project, comprising of several assemblages and installations, Adéagbo develops a personal encyclopaedia of things and impressions he has collected throughout his research in Berlin and Benin, and sets them centre stage with his written comments. Adéagbo’s installations are both a cross-section of our time with its diverging geopolitical interests, as well as an evidence of the mediating function of cultures, which Adéagbo makes visible through his cultural transfer. In Benin, he has translated what he found in Berlin into images and reliefs; from there, he brings sculptures and masks which enter into conversation with Western artefacts. At the same time, as the title suggests, the new assemblage is a reflection on the artist’s own practice of collecting and questioning.

Adéagbo often compares his installations to a courtroom, in which many witnesses testify to the facts of a case, and the observer ultimately makes their own judgement or simply leaves what at first seem to be contradictory ones standing. Above all, Adéagbo sees writing systems as building blocks of cultures, almost as a kind of DNA, whose modification can have fatal consequences. He also alludes to control and manipulation through language; he formulates this in a textual part of the work:

Since the name of all the persons, of all the animals, can be found and recognised in the 26 letters, what would become of the person, the animal, if one of the 26 letters were to disappear or be erased? Paul and Pierre, who are akin, as can be seen by the P, the 16th letter, did Paul, who seeks the death of Pierre by deleting the letter P, know that he would also precipitate his own death? [See green painting P]

According to Adéagbo, some letters obtained privileges when they were created:

Source of inspiration for the title, which was chosen together with gallerist Barbara Wien, is the famous L’Abécédaire de Gilles Deleuze – a series of interviews conducted by Claire Parnet broadcast on French television in 1988/89. It is no coincidence that precisely this philosopher, together with Félix Guattari, transferred the image of the rhizome from botany into the discourse surrounding cultural processes without hierarchy, without centre, beginning or end. This image, together with their concept of “the logic of the and”, assists in the understanding of Adéagbo’s practice as open systems.

Adéagbo’s rhizomatic networks question the conventional aesthetic of completed works, and thus also the myth of the icon of individual paintings or sculptures acclaimed by the art market. He challenges the viewer to open up to an accumulative aesthetic of ever-growing and changing. Therefore, Adéagbo’s Abécédaire is not restricted to the limited family of alphabet letters, rather is the beginning of a collection of exempla, stretching to infinity.
(Text by Stephan Köhler)