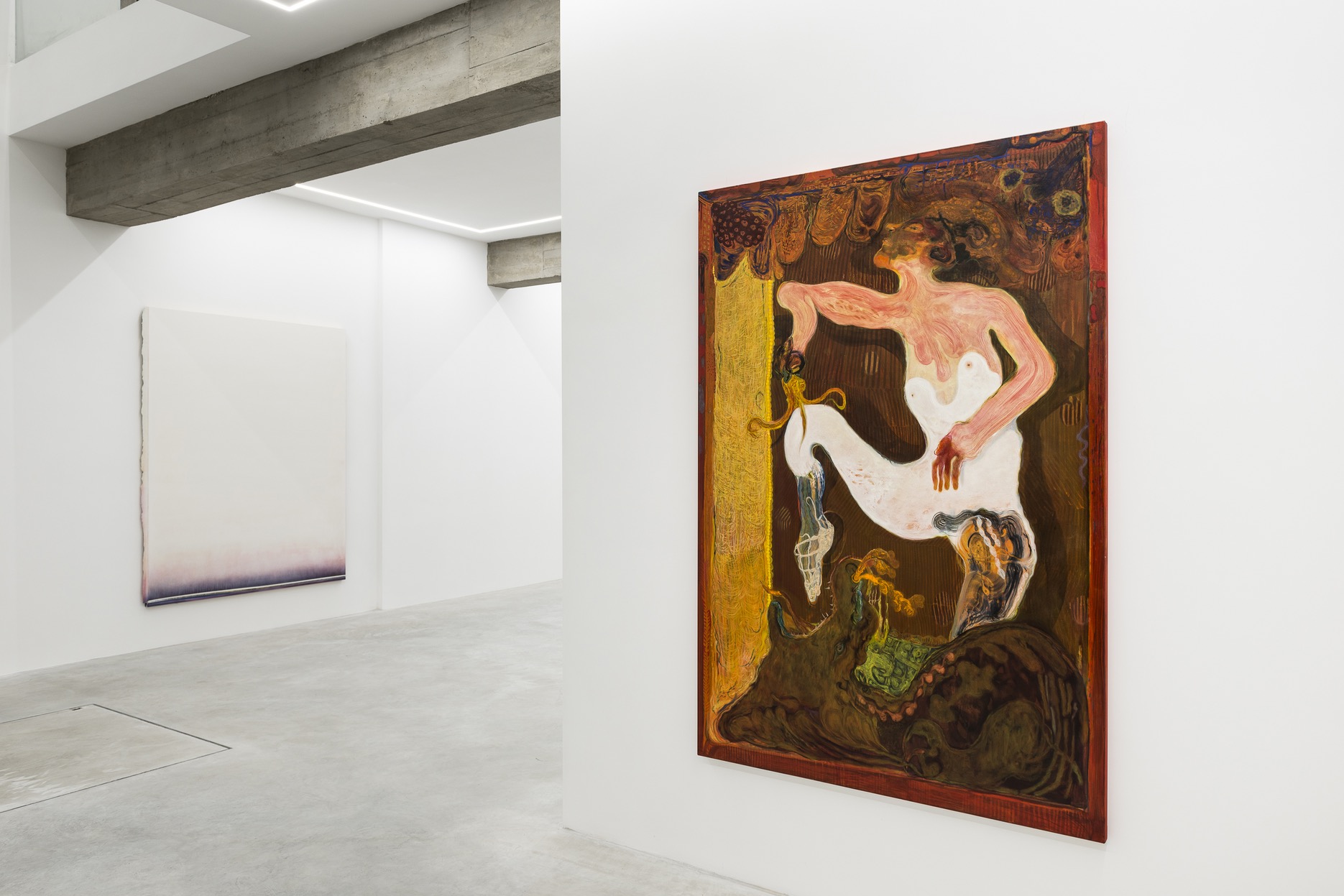 Galerie Rolando Anselmi is thrilled to announce the opening of its new venue in Rome. To inaugurate the exhibition activity, a large group-show is bringing together the works of all the artists who contributed to shape the identity of the gallery since the beginning of its activity. The Grand Opening is therefore conceived as a compendium of the work done so far and, at the same time, a manifesto capable of reflecting the artistic languages that will unfold in the years to come, thus anticipating the future directions of the gallery. The selection of artists speculates over the basis of the aesthetic experience and the encounter with the work of art, exploring the conditions of visibility and the status of the image-object. The experience of the exhibited works - many of which were specifically conceived for the occasion - often intimates asense of aesthetic displacement, integrating and opening up our epistemological understanding of perception.

Two sculptural works welcome the viewer, articulating a sense of expectation capable of revealing the temporal horizon of a possible event. Li Gang’s Vowel, a traditional Chinese vase fixed on the wall by an iron structure, replicates a modern amplification system, suggesting a relation with the concepts of sound and listening. Of a similar provocative tension, Arcangelo Sassolino’s Piegare il tempo presents a glass plate bent to the limit of its possibilities, stressing the material resistance and contemplating the risk of its collapse. The tension that comes with the awareness of this risk play a huge role in the viewers experience. On the opposite side of the room, three poetics of absence and imaginative fields are placed, in which immateriality occupies the same space as the object and supplements its meaning. On the floor, La nebbia dissolta dalla pioggia by Gianni Caravaggio shows a subtle play of solids and voids that infuse the firm material with a dense and floating aura, witnessing by the way of its concavities the presence of an invisible space. The material goes beyond its usual attributes, leading the spectator to amplify his preconceptions and venture above the objectivity. On the wall, the painting by Gianni Pellegrini is originated by an accumulation of imperceptible layers of paint. The absence of brush strokes brings the gaze to wonder on the surface getting progressively absorbed by looking for coordinates. Pellegrini’s paintings merge the contradictory characteristics of physicality and immateriality, creating a suspended structure of oscillating light and depth. This ambiguous materiality is confronted with the adjacent work by Jodie Carey, in which long lengths of hand-made fabric are woven and knotted together, resulting in a sculptural object that challenges the permanence and solidity usually associated to it. Despite bearing no discernible narrative, this work recalls traditions of recording collective memory, resonating with references to the passing of time, mortality and commemoration.

On the other side of the room, Giorgio Andreotta CalòAnnunciazione interprets in a different light this poetic of absence. The print is part of a body of work made by placing photosensitive paper in contact with a historic stained glass window of the monumental Oude Kerk in Amsterdam. The negative image, generated by the impact of the silver salts with the sunlight filtered through the window, thus shows the process of time recorded on physical matter, drawing its shape from the environment and the energies unleashed within it. Hanging on the wall, Valerie Krause’s Restless Tension defines its existence in space. Her work is the outcome of a deep investigation on spatial occupation and the transitory nature of physical structures, in a formal but at the same time emotional dimension.

On the lower floor, the surrounding environment takes on a dense consistency in the painting by Guglielmo Castelli, affecting and shaping the personal and inner space. The void around his figures is inevitably seen as a field of existence, belonging to the bodies and contributing to their qualities. The permanence and disappearance of memory characterize Calliope, part of the series Corteggiamento by Luca Vitone, a group of installations dedicated to the Muses, each consisting of three elements: an object of popular furniture, lights and a musical instrument which executive practice has been lost. Vitone is concerned with the concept places’ identity, that reveal themselves to be more than physical and geographical spaces, and whose true dimension is defined by culture and collective memory, proposing a reflection on a heritage that is being forgotten. Moris (Israel Meza Moreno)builds records of social dynamics within the urban area of his origin, marked by a highly social and cultural complexity. In Ciudad de tumbas abiertas, the urban fabric is associated to Piranesi's Prisons. The prison becomes a flagrant problem of existence, as a condition for identifying the struggle between subjective interiority and external reality. Repetition and method characterizeIgnacio Uriarte drawing, where an agglomeration of vibrant lines gradually form a textual fabric. Those lines, from thick and recognizable in the borders, to lighter towards the center, creating an almost suspended, monochromatic field. Each line, and its repetition, is a proof of an act within the process of time. This readability of the creative act as a temporal structure, characterize also Vincenzo Schillaci's paintings, defined by layers of paint and stucco, by which he analyzes the linguistic components of the pictorial medium. His calm technique of stratification, the constant scanning of time through layers, is a system devised by the artist to find a rule and build a grammar in the potentially endless field of painting. This grammar, however, inhabits a poetic dimension, stressing the painting’s ability to create a further stage of reality, a gate into the aesthetic experience. Johannes Wald’s Untitled (model for a self) embodies, as the title suggests, his musings about his self image as an artist. His work belongs to the field of matter, pushing to the limit the idea of sculpture itself. He is pushed by the contradictory will to translate into form and matter something unstable and perpetually changing.

Dominik Lejman operates within aunique time-space interstice that embraces film and painting, in which material and projected image are optically merged. In Afterparty, the monochromatic canvas appears as a field of projection where an abstract sign divides the painting into two areas, like a dark theatrical stage. Every few seconds, the canvas is suddenly transformed into a show performing a dancer, which appears as a ghostly and immaterial presence within thematerial entity. Asger Dybvad Larsen’s focus lies in a persistent investigation into the media of painting and its materiality. His works, highly tactile, are characterized by the use of repeated geometric shapes made out of slices of canvases, dunked into color and progressively sewed together. Form, composition, structure and materiality are the immediate physical factors which state the autonomy of those works and their tautological dimension. Santiago Taccetti’s painting can be described as seductive explorations of technique, texture and surface. Taccetti’s practice thrives on this tension between the planned elements and the once determined by chance that occur during the creative process. His canvases do not declare any theory or figuration, but the process of their creation, setting the physical and conceptual parameters that define the work of art.