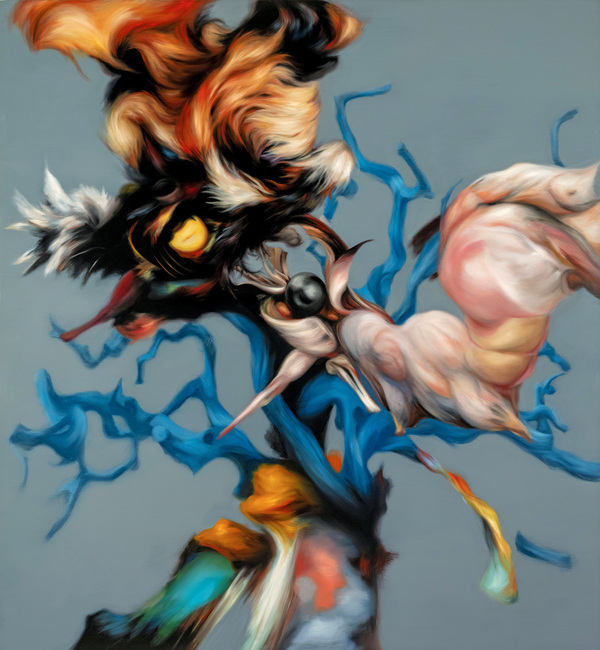 The most recent works by British artist Hugo Wilson (*1982), all created between 2018 and 2020, playfully make use of three media: Wilson’s stylistic and thematic stringency extends across 17 oil paintings, large-format charcoal drawings, and sculptures in bronze and ceramics.

In all three media, we witness an exciting tightrope walk between past and present: In the manner of the Old Masters—whose technique, coloration, deployment of light and composition Wilson adapts with great ease—highly abstracted, amorphous objects merge into powerful, dynamic movements, most of which are catapulted almost centrifugally from the center of the picture. In a twofold way, these works play with our collective visual memory and anticipation. First of all, Wilson’s dramatic compositions particularly invoke the art of the Dutch and Italian Baroque periods, i.e. the era that is today considered to be almost emblematic of the European painting tradition. In addition, Wilson’s agglomerates trigger numerous figurative associations. In most cases, Wilson deliberately evokes such notions by hiding eyes and extremities, feathers and furs, pearls and branches in his color swirls—presenting them as a starting point for our search for further concrete pictorial content. But regardless of whether we try to trace the composition back to a specific art-historical source or whether we are enticed into identifying a distinctive figurative feature: In the end, both trails prove to be fruitless. Wilson’s pictorial inventions elude definition. It is precisely this game with our expectations that the artist is interested in, as he aims at revealing our desire for unambiguity—for those “truths” mentioned in the title.

In fact, the painting Guru, with which the artist shatters the uniformity of this body of works, also pursues this concern. It is a realistic portrait of an Indian guru who, under the name of Sathya Sai Baba, caused an international sensation. In 1950 he founded an ashram, which soon became a refuge for many Indians and a place of aspiration for sense-seeking Europeans and Americans. Those who could not travel to the promised land themselves, bought their participation from afar. The donations in part funded major charitable projects, turning Sathya Sai Baba into an actual savior. At the same time, criticism was voiced against the wealthy sect—and from the 1970s onwards, accusations of abuse were levelled against the guru. However, such allegations did little to harm his reputation. The sect continued to prosper and today has branches in more than a hundred countries. With this painting, Wilson has captured the contradictory reception of Sathya Sai Baba: His guru can be both a menace and a promise of salvation. This ambivalence has an autobiographical background. In the 1990s, Wilson’s father was briefly a follower of the guru. His receptiveness to varying ideologies repeatedly put family life to a severe test. Through this painting, Wilson has made his peace with that part of his family’s history. He has not made any judgement on the subject of the portrait, but has created a projection surface that allows for both perspectives. Wilson’s Guru thus becomes an autobiographical epilogue of his title-lending search for coincidental truths.