Jeremy Bolen. Because The Sky Will Be Filled With Sulfur 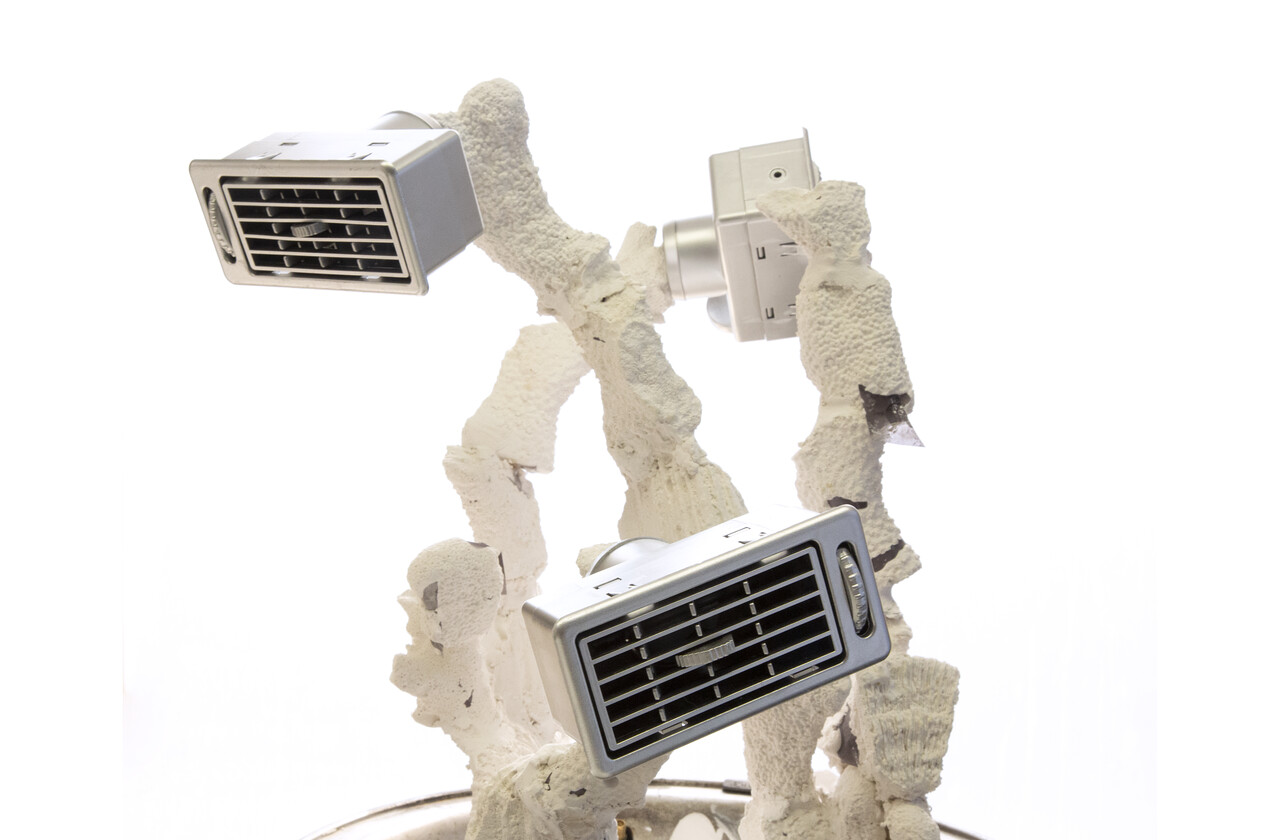 Jeremy Bolen. Because The Sky Will Be Filled With Sulfur

In Because the Sky Will Be Filled With Sulfur, artist Jeremy Bolen presents a new, immersive exhibition of speculative documentary works that record our current climate crisis while simultaneously speculating on the optics and aesthetics of a possible geo-engineered future. Composed of photo-based images, hybrid objects, videos and sculptures, Bolen’s works often incorporate materials and methods that have been proposed to cool the planet, envisioning a world featuring sulfur-filled skies, tinted shields for coral reefs and iridescent crops.

The exhibition centers around a climate-engineering proposal dubbed solar radiation management, in which sulfur particles injected into the stratosphere would combat rising temperatures by reflecting sunlight away from the Earth’s surface. Mirroring the cooling effects of ash clouds caused by volcanic eruptions, the procedure could have many unpredictable and unfavorable consequences including whitening the daytime sky, obscuring our views of the stars and affecting crop production.

This project also includes images of a sediment core sample that Bolen documented on a research trip earlier this year to Searsville Lake at Jasper Ridge Biological Reserve in Stanford, California. When the human-made reservoir was dammed in 1892, it created conditions that resulted in the body of water becoming almost entirely filled with unusually undisturbed sediment. Sediment cores such as this mirror our civilization, offering evidence of earthquakes, chemical residues, nuclear testing and fossil fuel combustion. They signify how we have manipulated the world in the past, and may behave in the future. Researchers at the Anthropocene Working Group (AWG) believe this 127-year-old core might offer geologic signatures that indicate when the Anthropocene Epoch can be said to have officially begun. Geologists searching for this marker call it the ‘global boundary stratotype section and point’—or, more colloquially, the golden spike. They may have found the appropriate signals in core samples removed from Searsville Lake.

Additionally, Bolen incorporates an array of found and cast objects—such as airplane parts, tinted coral, unexposed film from 1963, air conditioners, leaf blowers, silver corn and casts of the once abundant (and now extinct) passenger pigeon—that offer relics and artifacts of our collective global movement, as well as representations of a seemingly fantastical future.

Employing an array of materials that index human impact on the planet and the technology being proposed to salvage it, Because the Sky Will Be Filled With Sulfur offers a scenario in which we can discuss how collective human patterns affect what is, and what will remain, perceivable, knowable and habitable.

MOCA GA’s Working Artist Project (WAP) was developed to support mid-career or established artists in the Metropolitan Atlanta area. The program is funded by the Charles Loridans Foundation, the Antinori Foundation, and the AEC with additional funding provided by the National Endowment for the Arts. There are a total of 42 fellows over the last 15 years. As a museum that is dedicated first and foremost to supporting Georgia’s contemporary artists, it is MOCA GA’s goal to encourage these artists to remain in our city to establish Atlanta as one of the best cities for launching a viable career in the arts.