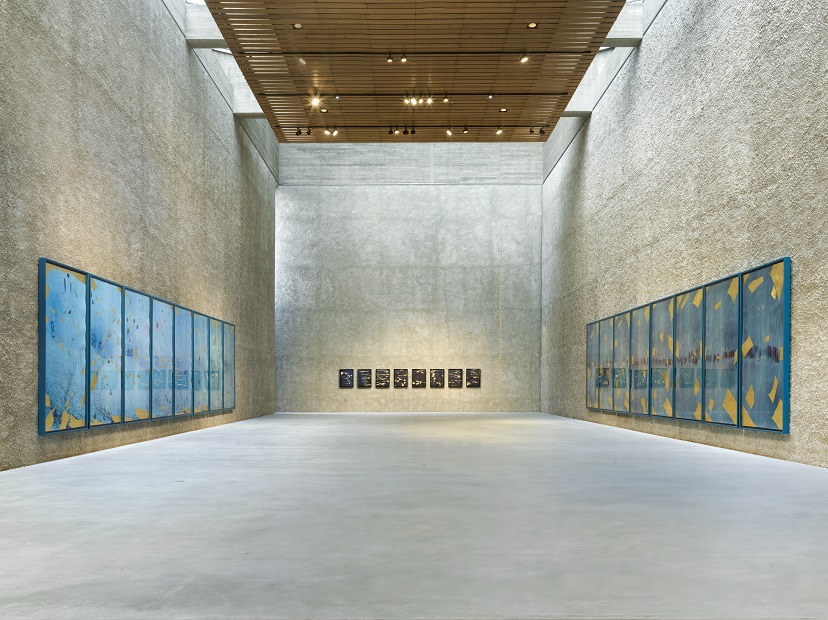 ST. AGNES | NAVEKÖNIG GALERIE presents The Real Extent, an exhibition of new works by Jorinde Voigt, on view in the Nave of St. Agnes from February 22, 2020 through April 5, 2020. This is Voigt’s fourth solo exhibition with the gallery. The works in The Real Extent, which include a new series of suspended works and recent works on paper, continue the artist’s investigations related to the process of perception.

Jorinde Voigt’s drawings and sculptural works develop rigorous, idiosyncratic systems to depict how one’s inner world — such as personal experience, emotion, and memory — intersects with external conditions. The artist’s ongoing Immersive/Integral series articulates an ever-expanding lexicon of forms: scribbled notations, swiftly looping lines, jagged eruptions of gold leaf, and rhythmic vertical strokes. A recurring motif in the series is the torus, a donut shape that lacks a clear boundary between inside and outside. For the French psychoanalyst Jacques Lacan, the topology of this form exemplified how the unconscious is not merely an interior psychic system, but intersubjective by nature.

The torus has become a central perceptual model explored in Voigt’s artistic practice and visually unfolds the artist’s conviction that we as humans are “always in context and in contact” with the world surrounding us. The formal language that Voigt develops, as well as her approach to materials and process, resists false binaries like the self and the other or notions of interiority and exteriority in favor of poly-temporal and entangled spaces. The torus tends to be the first form that Voigt commits to paper, executed in a broad sweeping stroke that often radiates from the center of the paper as if charting out a space of possibility or a sphere of action. Although intuitive and expressive, Voigt’s mark-making evolves from a nonetheless rigorous meditative and observational process. She begins by submerging large sheets of paper in pigment to imbue them with a specific mood or attitude. In The Match, an amorphous, organ-like form occupies the center of the composition. Large swathes of gold leaf beam from this central shape like a placid, luminous sea. The work depicts two parallel, yet inter-related series of movements: that of the artist’s body and the singular velocity of the materials themselves. Fragmented body parts rendered in pale blue reveal themselves as traces of where Voigt made contact with the paper while slender, salmon-colored tunnels coil in and out of view, charting the movement from one posture to another. Similarly, in the exhibition’s title work, The Real Extent, we see a curve of experience that encompasses traces of movement and the accumulation of time through a series of hills, tunnels, splashes, gold leaf, and rhythmic red hatch marks that radiate from or intersect a central white tori executed in graphite against a rich blue background.

ST. Agnesalexandrinenstr. 118-121d-10969 berlinopening hourstue – sAT 10 AM – 6 PMSUn 12 – 6 pm koeniggalerie.comT +49.30.261030 80F +49.30.261030 811info@koeniggalerie.comDelicate mobile works crafted from suspended brass chain punctuate this effervescent installation of works on paper. The structure of each Fibonacci Model is determined by the eponymous mathematical equation, a numerical sequence in which each number is the sum of the two preceding ones. These ethereal, suspended mobiles function as thought forms of perceptual models: fleeting and unstable, they are a means of finding balance in instability and reaching equilibrium through continual reorientation. Taken together, these two new bodies of work gesture toward the limits of our experience and the edges of our perceptual and temporal capacity: the space between the one and the zero, the part and the whole.

JORINDE VOIGT was born in Frankfurt am Main in 1977. She graduated from Katharina Sieverding’s master class at the Berlin University of the Arts in 2004 and lives and works in Berlin.

Her most recent solo exhibitions were on view at the Hive Center for Contemporary Art, Beijing (2019), the Horst Janssen-Museum, Oldenburg (2019), the St. Matthäus-Church, Berlin (2018), the Kunsthalle Nürnberg, Nuremberg (2017), Hamburger Bahnhof—Museum für Gegenwart, Berlin (2016),the Kunsthalle Krems, Austria (2015), the Museo d’Arte Contemporanea, Rome (2014), and the Langen Foundation, Neuss, Germany (2013). She has contributed to several biennials including, most prominently, the Manifesta 11, Zurich (2016), the Biennale de Lyon (2017) and the Vienna Biennial for Change (2019). A selection of Jorinde Voigt’s works will be featured in upcoming exhibitions at the Kunsthistorisches Museum Wien, Vienna and the BOZAR, Centre for Fine Arts, Brussels.

Work by Jorinde Voigt is included in numerous collections, among them the Art Institute of Chicago, the Centre Pompidou, Paris, the Kunsthaus Zürich, the Morgan Library & Museum, New York, the Museum of Modern Art, New York, the Pinakothek der Moderne, Munich, the Staatliche Graphische Sammlung, Munich, and the Kupferstichkabinett, Berlin.