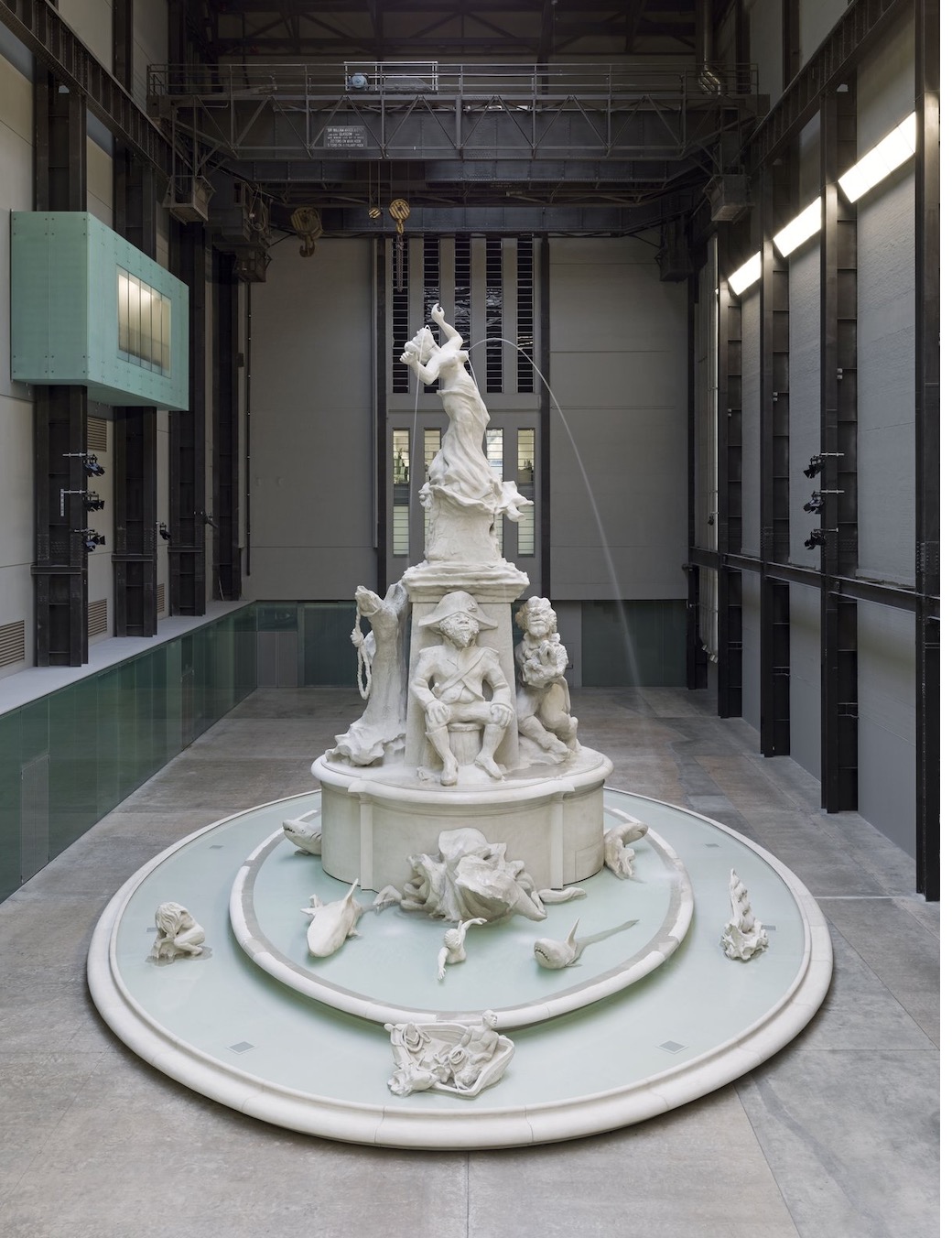 Allegory in art is when the subject of the artwork, or the various elements that form the composition, is used …

‘My work has always been a time machine looking backwards across decades and centuries to arrive at some understanding of my “place” in the contemporary moment.’ - Kara Walker

Kara Walker is an artist whose work explores ideas around identity, race, sexuality and violence. She works in a variety of mediums, including painting, print-making and installation. For Tate Modern’s 2019 Hyundai commission, Walker has created a large-scale public sculpture in the form of a four-tiered fountain. Fons Americanus questions how we remember history in our public monuments. At the same time, the work presents a narrative on the origins of the African diaspora.

Fons Americanus is inspired by the Victoria Memorial in front of Buckingham Palace, London. The memorial was designed in 1901 and unveiled in 1911 to honour the achievements of Queen Victoria who was the Queen of the United Kingdom of Great Britain and Ireland (1837–1901), as well as the Empress of India. Rather than a celebration of the British Empire, Walker’s fountain inverts the usual function of a memorial and questions narratives of power. Walker explores the interconnected histories of Africa, America and Europe. She uses water as a key theme, referring to the transatlantic slave trade and the ambitions, fates and tragedies of people from these three continents. Bringing together fact, fantasy and fiction, Fons Americanus stands as a representation of this narrative in the form of an allegory or fable.

The full title of the work is painted on the wall of the Turbine Hall. Written in Walker’s own words, the text encourages us to confront a history often misremembered in the UK. She presents the artwork as a ‘gift … to the heart of an Empire that redirected the fates of the world’. Walker has signed the work ‘Kara Walker, NTY’, or ‘Not Titled Yet’, in a play on British honours awards such as ‘OBE’ (Order of the British Empire).

Walker’s choice to create Fons Americanus in the form of a public fountain is significant in the wake of recent student demonstrations to take down monuments that celebrate colonial histories in both the US and UK. Fons Americanus turns the celebration and honouring of monuments inside out. The monument asks uncomfortable questions by exploring a history of violence against Black people of Africa and its diaspora that is often unacknowledged.

As you enter the Turbine Hall, you first encounter a smaller monument of Shell Grotto. Taking the form of scalloped shells from art historical depictions of the Roman goddess Venus, Walker’s shell encases a weeping boy inside a well, almost completely submerged in water. His head floats just above the surface as if drowning or emerging from the depths, with pools of water running from his eyes.

Walker’s Shell Grotto connects to the ruins of a colonial fortress on Bunce Island in Sierra Leone. Bunce Island was one of many commercial forts where European slave traders and African merchants traded and captured men, women and children ready for them to be sold on the plantations of the New World or America.

Walker’s weeping boy and well question how these traumatic histories are now celebrated. The weeping boy bounces back from the depths of waters to interrogate what we choose to remember and what we forget. How can we see the monuments in our public spaces in a new light?