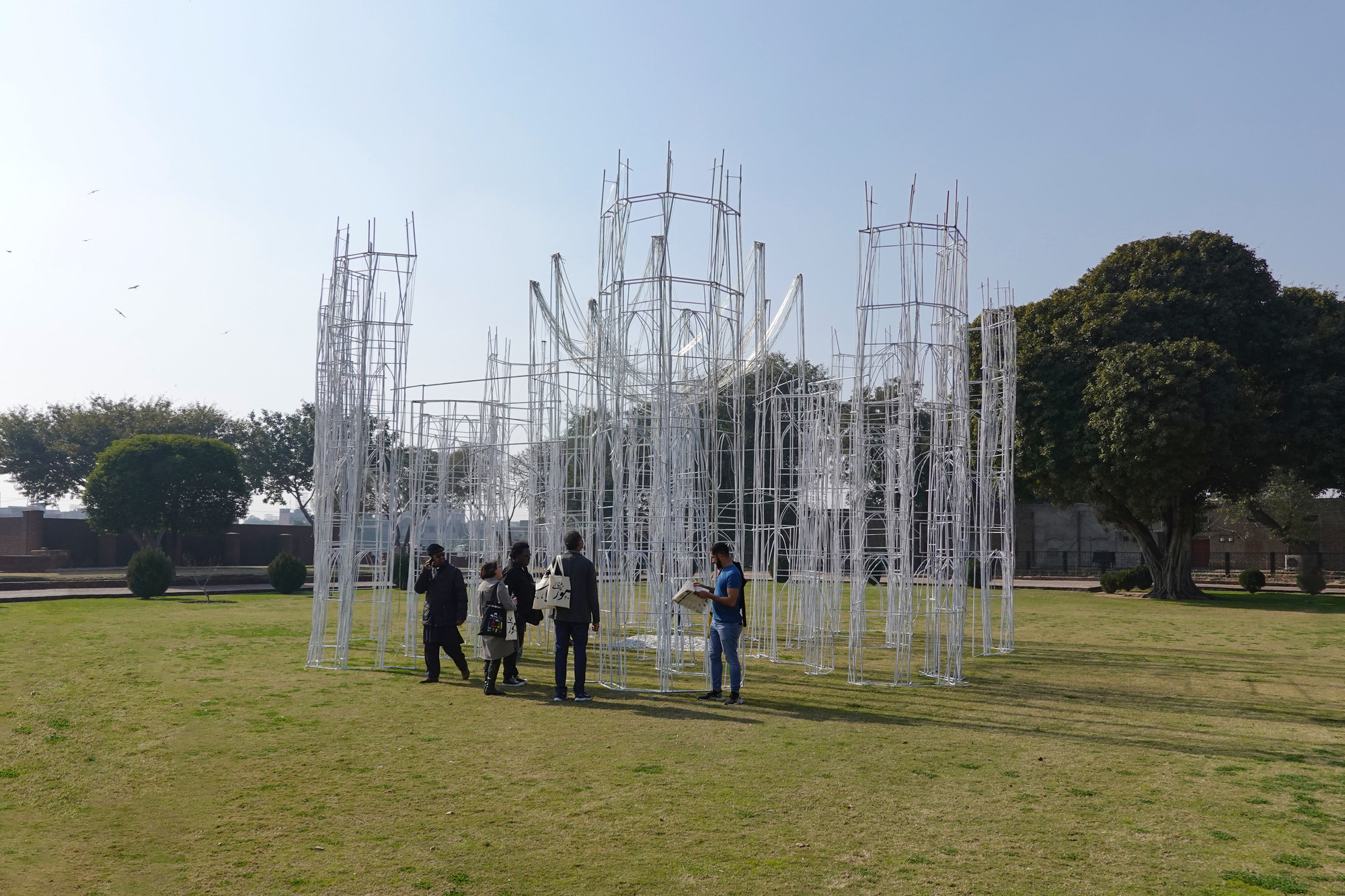 Local and international artists and curators, public figures and patrons gathered with art lovers over the weekend to open the second edition of the Lahore Biennale (LB02) on January 26, 2020. The inauguration ceremony took place amidst majestic surroundings in Hazuri Bagh, a garden in the city’s historic fort. Newly commissioned projects were unveiled alongside important works of contemporary art: Diana Al Hadid’s remarkable public sculpture in the gardens of Divan-e-Aam, inspired by the popular legend of Anarkali; installations by diaspora artists Hajra Waheed, Haroon Mirza and Khadim Ali and paintings by Ethiopian artists created in Lahore. In the Summer Palace, dozens of participating artists and curators visiting Pakistan for the first time mingled with the public as they viewed Wael Shawky’s Cabaret Crusades, exhibited alongside sculptures by Dagestan’s Taus Mackacheva. Chief guest Dr. Arif Alvi, the President of Pakistan, thanked Hoor Al Qasimi, President and Director of the Sharjah Art Foundation, for her efforts in curating the Biennale.

“The world has to understand what the history of Lahore is,” explained Al Qasimi to journalists. A key objective of the Lahore Biennale, she added, is to illuminate the rich diversity of culture within the region whilst stimulating dialogue between nations and regions of the global South, not least South and West Asia. “I was very interested [in curating LB02],” said Al Qasimi, “because there is a long history between Pakistan and the UAE.” Several projects such as Reem Falaknaz’s exploration of popular pigeon racing highlight little known and forgotten ties of cultural and historical exchange.

An influential figure and visionary within the world of contemporary art, Al Qasimi is known for having transformed Sharjah into an international art capital. “I have blind faith in her curatorial skills,” said Mia Eldib, Sotheby’s Middle East consultant on Contemporary Arab Art, on her first visit to Lahore, adding: “I am here because I know she will deliver a spectacular show.”

Al Qasimi’s collaboration with the Lahore Biennale Foundation, overseen by its founder and driving force Qudsia Rahim, is thought to have genuinely transformative potential for the art scene in Pakistan. Art historian and LBF advisory board member Iftikhar Dadi reflected on its significance within the history of global art exhibitions, alongside Mohsin Hamid’s carefully calibrated reminder of art’s critical role in society, which added a sobering note of concern about the challenges faced by exponents of free expression.

Titled between the sun and the moon, LB02 is a cultural event of unprecedented scale in Pakistan, bringing over 80 artists’ projects from all over the world to numerous sites in the city of Lahore. A centerpiece of the Biennale is an ambitious, immersive multimedia installation on Islamic cosmology at the PIA planetarium. Created by Berlin-based, Kazakhstan-born artist Almagul Menlibayeva, it is inspired by the astronomical discoveries made by Islamic astronomers in Samarkand. Site-specific performances by the Amsterdam-based sound artist German Popov and Russian artist Inna Artemova have added to its sublime effect, mesmerizing visitors on subsequent days with the help of classically trained local musicians. Other noteworthy performances included a stunning musical experiment by Haroon Mirza in Gaddafi Stadium’s Alhamra Amphitheatre. Veteran artists Rasheed Araeen and Anwar Saeed were honored with special awards.

As the curatorial concept explains, the Biennale’s focus encompasses a search for sustainable ecology within the South, a search that involves revisiting our understanding of the cosmos itself. Commenting on this theme, Al Qasimi said: “For centuries, inhabitants of these regions oriented themselves with reference to the sun, the moon and the constellations. How do we reflect on our place within the universe today, at this junction of climate crisis and polarities between societies?”