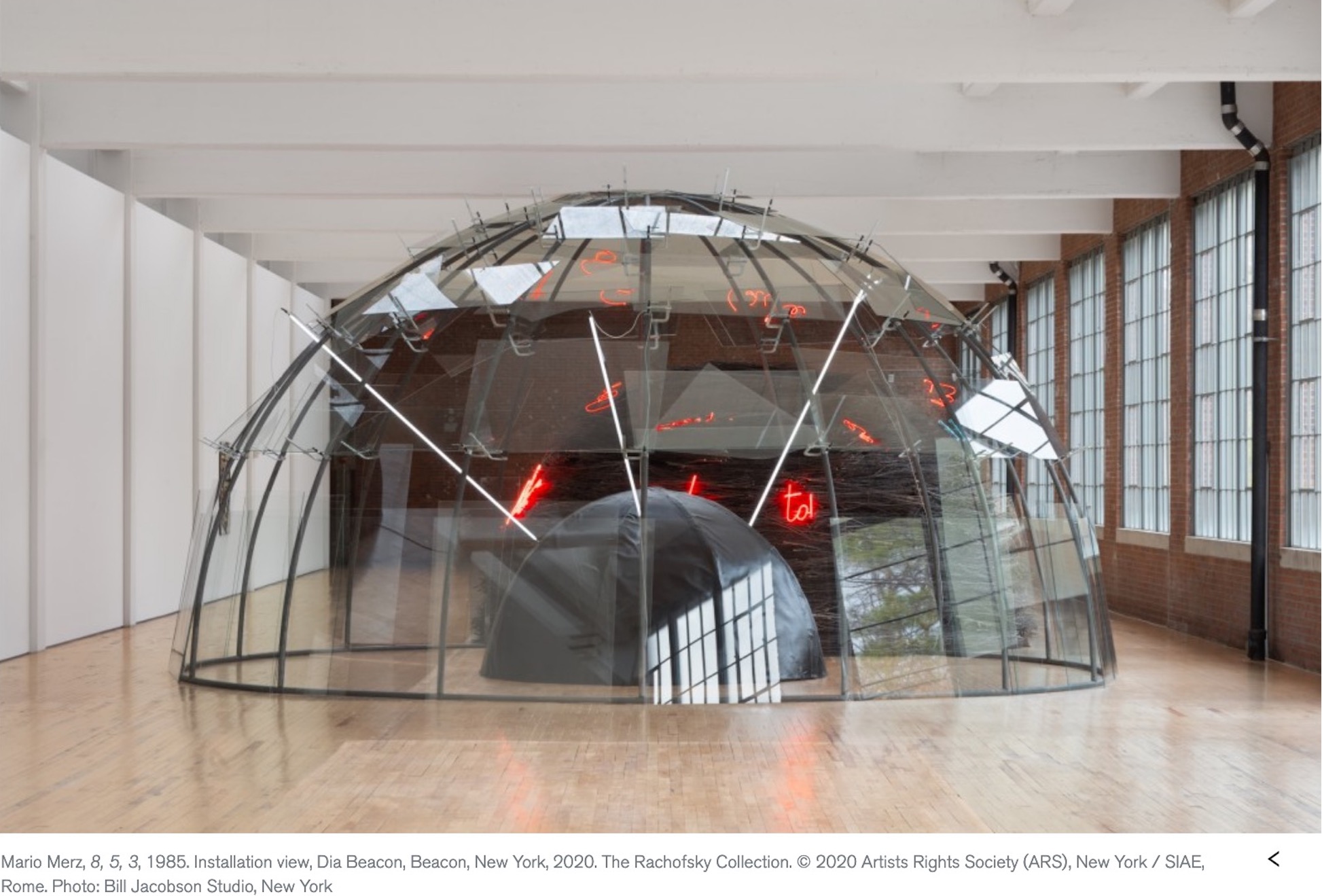 Beacon, New York, October 15, 2020 – On November 20, 2020, Dia Art Foundation opens a long-term exhibition of work by Mario Merz, a central figure in the Arte Povera movement that emerged in Italy in the late 1960s. Spanning the late 1950s through the mid-1980s, this exhibition includes Dia’s recent acquisitions Teatro cavallo (Horse Theater, 1967) and Tavola spirale (Spiral Table, 1982) alongside historical loans from collections in the United States and the Collezione Merz in Turin, Italy. Using recycled organic and industrial materials, the artist developed a highly imaginative iconography and recast familiar forms like the igloo and the table in installations that envision the interdependency of individuals, society, and the natural environment. The featured works revisit Merz’s signature motifs, distinctive use of neon, and deployment of the Fibonacci sequence—where each number equals the sum of the two that precede it—for the structure of his installations. This is the artist’s first solo institutional presentation in the United States since 1989.

Formally and conceptually related to developments of Postminimal art in the United States and Mono-ha (School of Things) in Japan, Arte Povera loosely defined a group of Italian artists whose work challenged the traditional values placed on art objects in response to an international wave of sociopolitical unrest in the late 1960s. To this end, Merz made installations that are at once autonomous and open-ended, using the Fibonacci sequence as symbol and structure and employing widely varying materials like fruits, twigs, wax, tar, wire, and neon tubes, which at times spell out political aphorisms or graft onto the architecture that hosts them. Shown in the context of Dia’s collection of art from the 1960s and 1970s, alongside peers with whom Merz exhibited in these seminal years—including Mel Bochner, Lee Ufan, and Robert Smithson—the exhibition illustrates how formal, material, and conceptual tenets developed simultaneously across countries.

“This survey brings together the threads that run through Mario Merz’s influential practice—from his use of neon as a disruptive energy, to his employment of the Fibonacci sequence, to his resolute embrace of found materials,” said Jessica Morgan, Dia’s Nathalie de Gunzburg Director. “I am delighted that we are able to put our new acquisitions on view as part of this exhibition. By placing these important works alongside those made by artists working within Mono-ha, Minimal, and Postminimal practices, we are able to allow for a more international and expansive approach that enriches audiences’ understanding of these movements.”

The exhibition features two pivotal works that recently entered Dia’s collection: Horse Theater and Spiral Table. Merz’s distinctive use of neon expanded the possibilities of this material in art, as evinced in Horse Theater. Two pieces of curved blue neon—one resting on a trestle, another hanging on the wall—sketch the contours of a horse. In Spiral Table, the table is recast as a piece of land. Set upon a metal-and-glass understructure, an arrangement of fruits and vegetables unfolds in a spiral dictated by the Fibonacci algorithm. The installation at Dia Beacon takes its cue from the composition that Merz and his wife, the artist Marisa Merz, made for his 1989 retrospective at the Solomon R. Guggenheim Museum in New York City, and will include a beeswax violin by Marisa, senza titolo (untitled, n.d.), as a material memory of their collaboration.

The Fibonacci sequence offered Merz an alternative way to measure and mediate space. For Progressione di Fibonacci (Fibonacci Progression, 1979/2019), a series of numbers rendered in blue neon are installed along the beams of Dia Beacon’s east corridor, proliferating outward and hinting at the possibility of exceeding the rational architecture of the building. Merz frequently returned to the igloo form after his first application of the shape in 1968. At once archetypal and utopian, the igloo alludes to adaptation, nomadism, and self-sustenance. On view as part of this survey, two igloos from different points in Merz’s career highlight the dynamic ways in which he deployed this form in response to a changing context. Additional loans in the exhibition further reveal the artist’s use of organic and industrial materials and processes to address the interdependency of nature and culture.

“Merz’s conceptually rigorous practice accommodates a great breadth of iconography and material sensibility, that remains radical even today and anticipates the sociopolitical and material trends of contemporary art,” said Matilde Guidelli Guidi, curator. “Shown in the context of Dia’s collection, his singular approach is underscored, just as striking communalities with his international peers are revealed.”

About Mario Merz
Mario Merz was born in Milan in 1925. A medical student in Turin during World War II, Merz started drawing in 1945 while imprisoned for his participation in the anti-fascist group Giustizia e Libertà. He had his first solo exhibition of paintings at Galleria La Bussola in Turin in 1954. In 1967–68, Merz was included in a series of events that gathered artists across Italy under the title Arte Povera. The following season, the artist participated alongside many artists in Dia’s collection in the exhibition When Attitudes Become Form at Kunsthalle Bern, Switzerland, in 1969 and the Tokyo Biennial in 1970. Merz’s first solo presentation in the United States was held at the Walker Art Center, Minneapolis, in 1972. Major international surveys have since been held internationally, most recently at the Museo Nacional Centro de Arte Reina Sofía, Madrid, in 2019–20. The Fondazione Merz in Turin, Italy, opened to the public in 2005 with a series of retrospectives dedicated to the artist. Merz died in Milan in 2003.

Taking its name from the Greek word meaning “through,” Dia was established in 1974 with the mission to serve as a conduit for artists to realize ambitious new projects, unmediated by overt interpretation and uncurbed by the limitations of more traditional museums and galleries. Dia’s programming fosters contemplative and sustained consideration of a single artist’s body of work and its collection is distinguished by the deep and longstanding relationships that the nonprofit has cultivated with artists whose work came to prominence particularly in the 1960s and 1970s.

In addition to Dia Beacon, Dia Bridgehampton, and Dia Chelsea, Dia maintains and operates a constellation of commissions, long-term installations, and site-specific projects, notably focused on Land art, nationally and internationally. These include: