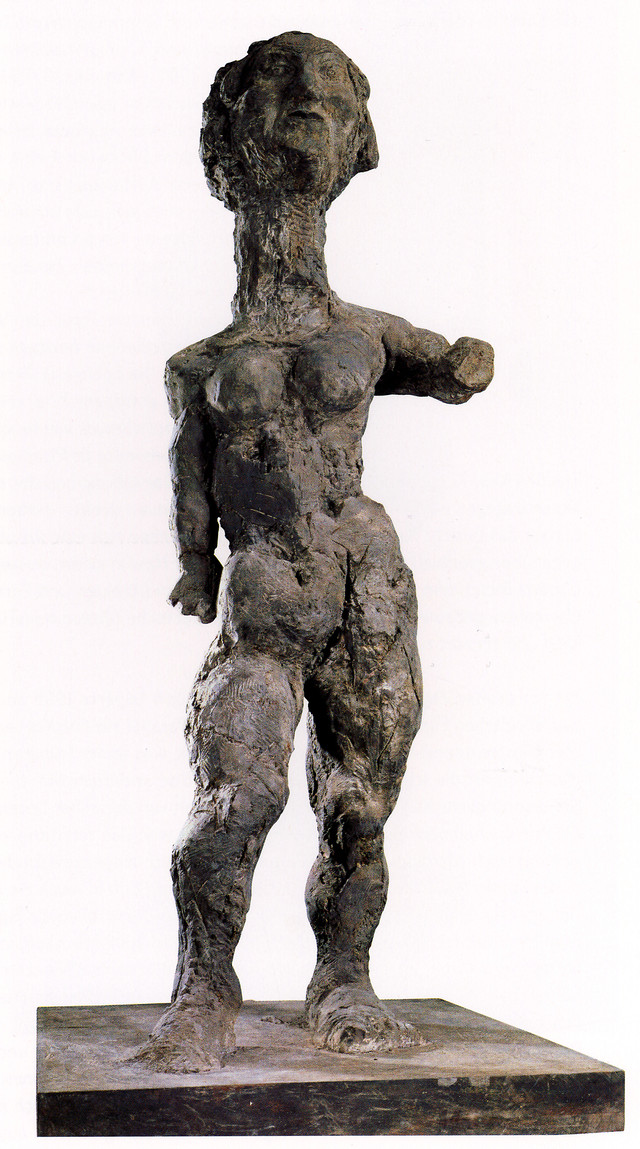 Markus Lüpertz (b. 1941, Liberec, Bohemia) is an internationally celebrated painter and sculptor whose work blends figuration and abstraction. His sculptures often refer to the canon of art history, from Greek antiquity to the Renaissance. Lüpertz’s bronze sculpture, Judith, represents the biblical heroine by the same name: a strong-minded widow set out to defeat Israel’s foreign conquerors. With devious intentions and alluring beauty she managed to seduce and behead the enemy general, Holofernes, which in turn resulted in her enemies’ dispersal. Lüpertz’s Judith, with characteristics such as an elongated neck, oversized head and bulky silhouette, does not outwardly resemble a classical beauty. These formal qualities instead represent a different sculptural tradition in which the simplification of certain shapes is contrasted by the enhancement of others. Her rough appearance and inner strength is unlike anything else at Ekebergparken and will be an engaging and important contribution to the park’s permanent sculpture collection.

Markus Lüpertz has exhibited his work worldwide for over 50 years. From the time of his first exhibition with Michael Werner, in Berlin in 1968, Lüpertz was already a forceful presence in German art. He frequently exhibited in Cologne and Berlin before breaking onto the international scene in 1977 with a major exhibition at the Stedelijk Museum in Amsterdam. Lüpertz participated in the legendary 1980 exhibition A New Spirit in Painting at London’s Royal Academy and was an important contributor to the controversial Zeitgeist exhibition in Berlin 1982. In recent years important retrospective surveys of the artist’s work have been shown at Kunst- und Austellungshalle der Bundesrepublik Deutschland, Bonn (2009); Gemeentemuseum, The Hague (2011); Museo de Bellas Artes, Bilbao (2014); The Hermitage State Museum, St. Petersburg (2014); and the Hirshhorn Museum and Sculpture Garden and The Phillips Collection, Washington, D.C. (2017).

About Ekebergparken
Founded in 2011 and officially opened in 2013, Ekebergparken is a 63 acre public sculpture and national heritage park located on the hillside of Ekeberg, ten minutes from Oslo city centre by public transport. The public park is the result of a public-private collaboration between C. Ludens Ringnes Foundation and Oslo Municipality. The initiative came from real estate mogul and philanthropist, Christian Ringnes, is financed through C. Ludens Ringnes Foundation and directed by CEO Ina Johannesen.

The park’s art collection, which has been carefully selected by an art committee, has with its acquisition of Markus Lüpertz’ Judith reached 37 sculptures. In addition to its strong permanent collection, Ekebergparken aims to be an arena for collaborative, temporary art projects. In 2015 and 2016 the contemporary music festival, Ultima, organised light and musical events in the park. Several musical compositions have been performed both inside James Turrell’s Ekeberg Skyspace and in Dan Graham’s Ekeberg Pavilion. Ekebergparken has also had the pleasure of hosting the performance festival, Soppen, which was a collaboration with Oslo Pilot and the artist duo Trollkrem.