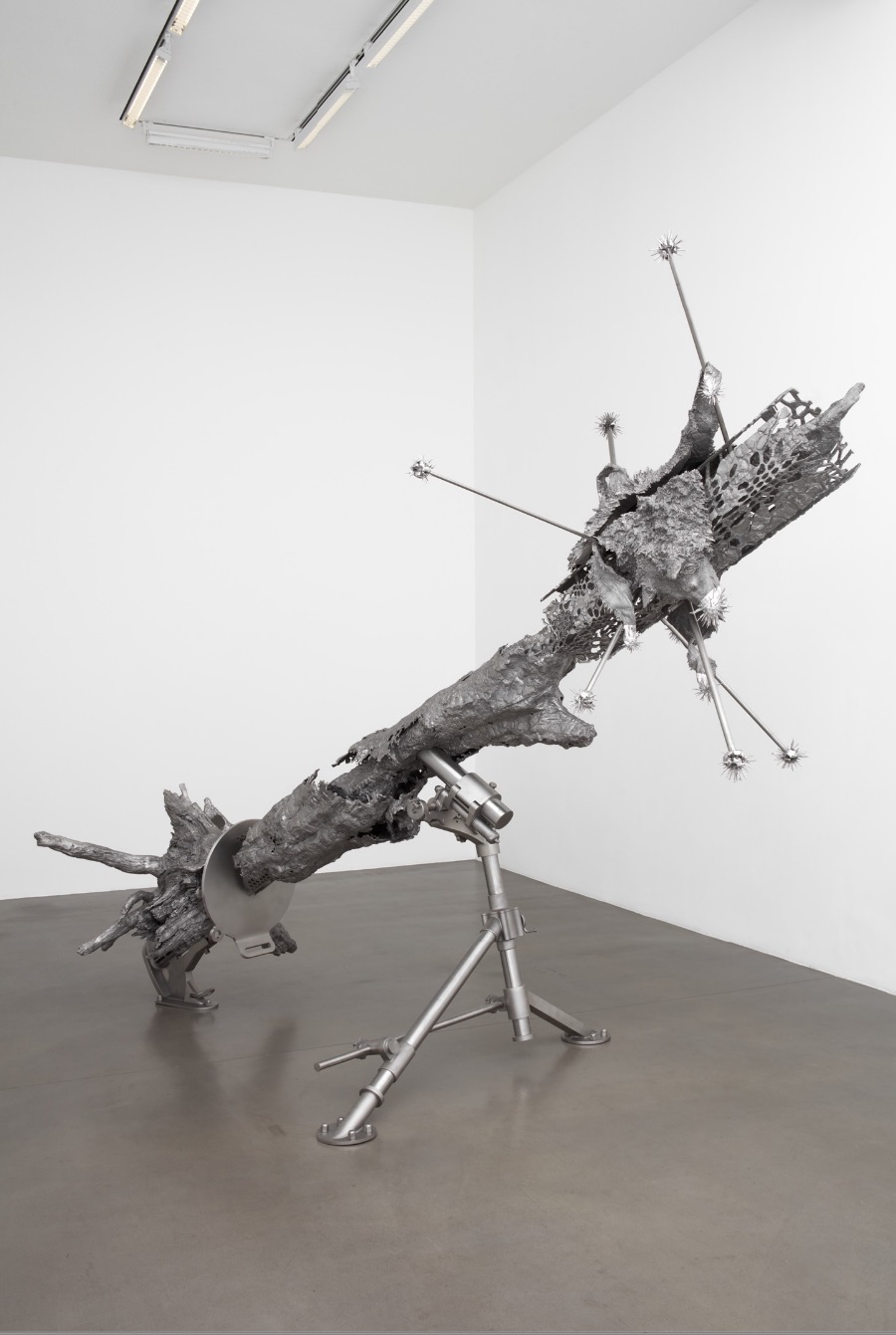 Cosmic Hunt, an exhibition of new work by Matthew Barney, centres on a monumental sculpture in cast stainless steel of the same name, together with twenty drawings rendered in finely scribed detail.

The sculpture and drawings find their origins in the artist’s acclaimed 2018 film Redoubt, in which ancient and modern myths of creation and retribution are transposed into the spectacular wilderness of the remote Sawtooth mountain region of Idaho.

At the centre of the exhibition, the Cosmic Hunt sculpture embodies the morphed skeleton of a burned tree, taking the form of a telescope or mounted artillery, and rendered on a monumental scale in intricately articulated stainless steel. Elevated on a bipod, its central ‘barrel’ resembles an amalgam of fractured bark, machined metal and scaly sheathing. At its pinnacle lies an eviscerated wolf, rendered in crystalline detail from a scanned model of the wolf’s body, notably, Barney’s first directly figurative sculpture. The wolf alludes to the leitmotif of Redoubt: a wolf hunt that unfolds in six choreographed movements over the course of the film. The creature is slung like a trophy, its bristling fur seeming to merge with the complex topography of the sculpture, and pierced by spears terminating in tiny coronae. Caught between the status of a lanced corpse and a constellation, the animal is in the midst of catasterism – transformation into a celestial body.

Barney’s sculpture dramatizes the central themes of Redoubt – the dual enmity and interdependence of men and animals, the collision of nature and technology, and the porous boundary between present-day reality and myth (the artist has spoken of the film’s depiction of the landscape as “grounded in the real.”) Poised on sleek tubular legs, the entire sculptural structure suggests a character in the throes of a metamorphosis – mechanical, animate, fossilised. The object appears to be turning inside-out, in an echo of Barney’s earlier sculpture Basin Creek Burn, 2018, where the core and exterior of a tree harvested from the Sawtooth Mountains were cast in one process, with the tree itself acting as a mold for the molten metal.

Cosmic Hunt stands as a reference to the character of Diana in Redoubt (played by Anette Wachter), a modern-day sharpshooter who uses a rifle mounted on a bipod to track the wolf, framing the animal in her telescopic sights. In classical myth, the goddess Diana turned the hunter Actaeon into a stag after he caught sight of her bathing. In Redoubt, Diana the hunter is also the hunted – she and her attendants are pursued by the enigmatic character of the Engraver (Barney), who documents their pursuits in a series of engravings. The sculpture’s hybrid form – like the layered allusions of the film – reaches into numerous mythologies and realities, including the contradictions of modern America, where technological progress finds its antitype in the survivalist sects of the Idaho wilderness. The artist has stated: “the term redoubt resonates as a description of more abstract forms of isolation or withdrawal”; Barney became interested at an early stage of the project with the term’s association with the American Redoubt, an extremist movement calling for a return to the land and a separation from government.

In a sequence of drawings in gouache and graphite (all 2020), Barney focuses on characters and settings from Redoubt, while invoking the film’s larger cosmological symbolism. The different hues of the paper – magenta, ochre, blue and orange (each matched in the drawings’ frames) – evoke the skies, forest fires and colour spectrums of the Idaho mountains. Diana with Quiver presents the character in the guise of a medieval knight whose chainmail transmutes into military camouflage. Avalanche Fence depicts the nets and buttresses of an avalanche barrier on a mountainside, the naturalistic rendering of the landscape intersected by a chevron of vivid magenta. The faint woodland scene in Blue Reticle is overlaid by two perpendicular axes that might equally be compass points or the sights of a hunter’s gun; while the wolf in Redshift appears to be trapped within, or impaled by, the lines of the constellation that it represents – a close counterpart to the animal at the axis of Barney’s new sculpture.

Cosmic Hunt will continue until the 16 January 2021, and forms the most recent chapter extending from Matthew Barney’s significant Redoubt project, which was first presented at the Yale University Art Gallery, New Haven, in 2019 (accompanied by an extensive publication), and subsequently travelling to UCCA Center for Contemporary Art, Beijing in 2019 – marking the artist’s first solo exhibition in China. In 2021, Redoubt will be the subject of a solo exhibition at the Hayward Gallery, London.

In Autumn 2020, Matthew Barney created the artist website Cosmic Hunt, an online capsule taking the form of an annotated map, with access to film clips, production photography and seven new drawings derived from the broader Redoubt mythosphere. The current exhibition includes the new drawings that formed the core of the online project. Access here.

Matthew Barney (b. 1967) is one of America’s most significant contemporary artists. Over the past two decades he has evolved a practice that encompasses filmmaking, performance, drawing, painting, and sculpture. Redoubt was first presented at the Yale University Art Gallery, New Haven, in 2019 (accompanied by an extensive new publication), and subsequently travelled to UCCA Center for Contemporary Art, Beijing in 2019 – marking the artist’s first solo exhibition in China. In 2021, Redoubt will be the subject of a solo exhibition at the Hayward Gallery, London. Major presentations in recent years include River of Fundament, Haus der Kunst, Munich (2014), touring to the Museum of Old and New Art, Hobart, Tasmania (2014) and The Geffen Contemporary at MOCA Los Angeles (2015); Subliming Vessel: The Drawings of Matthew Barney, The Morgan Library & Museum, New York (2013), and the Bibliothèque nationale de France, Paris (2013-2014). In 2002, Barney’s acclaimed series The Cremaster Cycle (1994-2002), was presented as a solo exhibition organized by the Solomon R. Guggenheim Museum, New York: travelling to Museum Ludwig, Cologne (2002); Musée d’Art Moderne de la Ville de Paris (2002); and Solomon R. Guggenheim Museum, New York (2003). Over the course of his career he has received numerous awards, including the Aperto prize at the 1993 Venice Biennale and the 1996 Hugo Boss Award. The artist lives and works in New York.