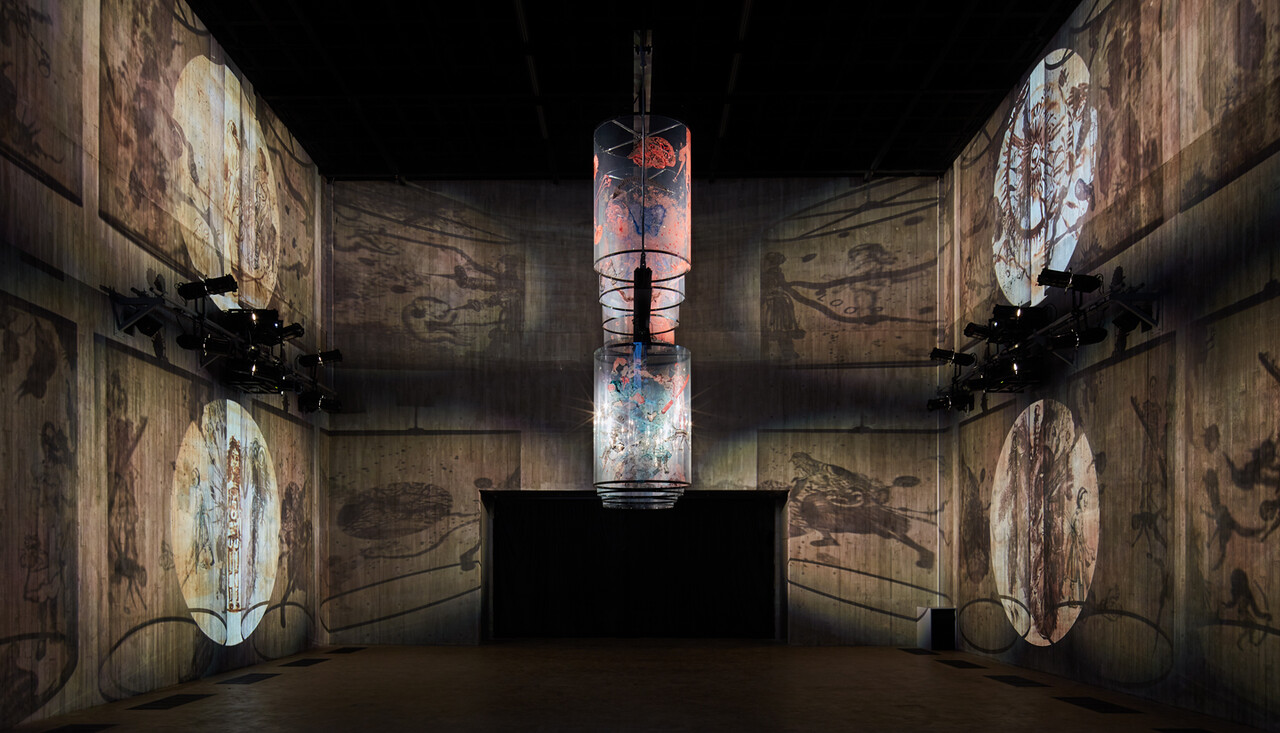 Nalini Malani
Vision in Motion
The inaugural exhibition for The Studio
December 7, 2021–July 31, 2022

Part of the grand opening display at M+, Hong Kong’s new museum of contemporary visual culture, Nalini Malani: Vision in Motion is the inaugural presentation in The Studio, one of the museum’s signature venues.

Nalini Malani, the Mumbai-based pioneer of experimental film and video, has transformed the vast subterranean space in the Herzog & de Meuron–designed M+ building with the installation of large-scale, immersive moving image works that reflect the breadth of her five-decade career.

Vision in Motion brings together three major artworks—Utopia (1969–1976), Remembering Mad Meg (2007–2019), and Can You Hear Me (2018–2020)—showcasing the evolution of the artist’s practice over the past 50 years as she embraced new technologies and ways of working. The exhibition highlights the artist’s distinctive approach to storytelling, which often combines personal narratives with motifs from folklore, classical literature, and mythology. These stories have the power to transcend the traumas of national divisions and address collective issues of social injustice. Malani is one of the most prolific cross-disciplinary artists working today. Her fantastical and multi-layered works are informed by her early experiences as a refugee following the partition of India in 1947. Through a practice that melds film, video, installation, painting, and performance, the artist expresses a resolute commitment to investigating the effects of war, violence, and the repression of women.

About Nalini Malani
Born in Karachi, British India (now Pakistan) in 1946, Malani studied at the Sir Jamsetjee Jeejeebhoy School of Art in Mumbai from 1964 to 1969, during which she had a studio at the Bhulabhai Memorial Institute. In 1969, she was invited to participate in the Vision Exchange Workshop (VIEW) where she made her first stop-motion animation and a series of black and white films. She continued her studies in Paris from 1970 to 1972 with a scholarship from the French government, and in 2010, she received an honorary doctorate from the San Francisco Art Institute. Malani has had retrospectives at Centre Pompidou, Castello di Rivoli, and Kiran Nadar Museum of Art, as well as thirty solo presentations in museums around the world. She participated in group exhibitions and biennials worldwide, and her work is in the collections of more than thirty public institutions.