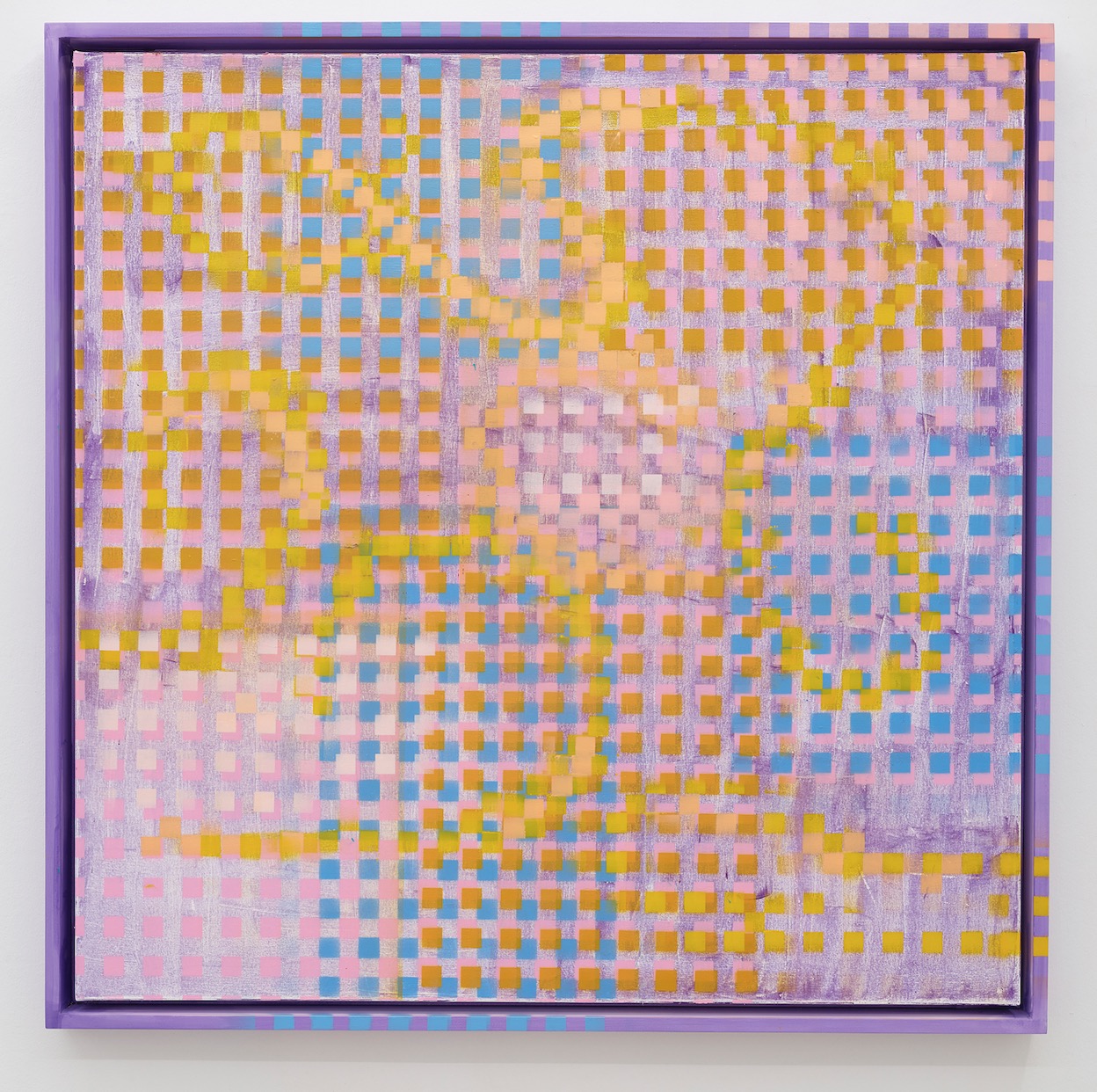 The title of the show stands in several respects for the opening of new horizons. The past two years of the pandemic have repeatedly demanded “mental mobility” from both the artists and the gallery. We are therefore extremely pleased to present new works by Heidi Hahn (US 1982), Keltie Ferris (US 1977), Vivian Greven (GER 1985), Barbara Kasten (US 1936), Natalie Czech (GER 1976), Mathilde Rosier (FR 1973), Art & Language (UK 1968) and from the estate of Ketty La Rocca (1938-1976) in the show “New Horizons”. All participating artists share an acute eye for the interplay of body, space, language and identity, which must be conceived anew, not least in the light of a constantly changing reality.

Heidi Hahn‘s (US 1982) new painting “Reasons for an Autobiography” combines references of gestural abstraction and the representational nature of expressive painting with her own view of contemporary issues such as identity, gender and society. Impressions of everydaysituations and her personal environment initiate Hahn‘s intuitive dynamic painting process. Layer by layer, motifs of “body spaces” emerge. The boundaries between surrounding space and body, surface and background are fluid. Hahn herself speaks of “narrative formalism”. In this sense, the intrinsic worldliness of the painting becomes an amalgam with the intrinsic worldliness of the figures.

Keltie Ferris (US 1977) translates the concept of identity on an abstract level. His paintings are characterized by references to Performance Art, Abstract Painting and digital imagery, combining the illusion of space with direct bodily experience. He occasionally uses his own body as a tool, while his painting as such evokes a corporeal space due to the change between spray-painted, hand-painted and relief-like elements. Ferris grasps painting as a personal index that rejects easy gendered identification of the body, suggesting a performative state of identity.

Natalie Czech’s (DE 1976) conceptual photography brings together existing images and texts and places them in a new dialogue with each other. In her new work „A poem by repetition by Louis Zukofsky“ the motif of is based on a golden picture frame produced by Time Magazine in the 1970s with the words TIME - Woman of the Year (The Weekly Magazine).

The lettering and the red frame, which remind the reader of the cover of the magazine, were produced together with a silkscreen on the glass. The respective buyers can stick a photograph into the frame and nominate the person depicted on it as „Woman of the Year“. In the lower half, a square marked in black with the text „Moisten This Spot And Adhere Your Photograph“ indicates this. The square is still in pristine condition, no photograph of the Woman of the Year has ever been used in the empty frame.

Barbara Kasten’s (US 1936) oeuvre opens up several perspectives on the conceptual horizons of various worldviews. Since the early 1970s, abstraction has been at the heart of Barbara Kasten’s work, evolving in an interdisciplinary “performance” that includes painting, architecture, sculpture, and photography. The triptych “Composition 7D, 7E, 7T” from 2017 is reminiscent of digital image generation, although it was entirely made in an analog work process in which the actual space and body are crucial components. Barbara Kasten constructs her “abstract scenes” in her studio using industrial props such as plexiglass and stages them with colored light. Her most recent piece from the cyanotype series “Variation IX” offers a preview of her upcoming show in May 2022. Barbara Kasten already began with this series that combines technical painting and photography at the beginning of her career in the 1970s. Paper is treated with a photosensitive emulsion and then exposed to sunlight. Depending on the positions of the objects, the final composition results as a unique copy. The works are therefore quite literally “painting with sunlight”.

Vivian Greven’s (GER 1985) painting is based on an adept play with various notion of bodies, being and representation, with concepts of classical antiquity merging with pop art and digital image worlds. Vivian Greven’s painting is characteristic of our present times, which are shaped by the internet and social media and thus dissolve the hierarchies between original, reproduction and simulation. The art historical and contemporary historical nestling corresponds with Greven’s painterly treatment of surfaces. Parts of her painting rise as actual reliefs that encounter sprayed or painted fictions of bodies and space. The aesthetic of her pictures vacillates between the vocabulary of physical painting and the ethereal illusion of LCD windows.

Ever since their foundation in 1968, Art & Language (UK 1968) have stood for a critical examination of the conventions of artistic practice. With the publication of the eponymous magazine “Art & Language” in May 1969, the issue at first was to expand the modernistic concept of art, which at the time exclusively defined painting and sculpture as art forms and attributed texts only to art theory and art criticism. The work “Index 01” shown at the documenta 5 in 1972, marked the dissolution of the boundaries between artist, critic and viewer.

Texts from the magazine “Art & Language” were collected in file cabinets, wall texts functioned as an “index”, leaving it up to the interpretation of the viewer to establish possible connections between the index and the collected texts as well as between the texts. The strategy of “indexing” is characteristic of all works by Art & Language. While other proponents of Conceptual art entirely rejected sculpture and painting, Art & Language from 1975 onward began critically integrating these genres into their work, for as the art writer Charles Harrison formulated it in regard to the working method of Art & Language: “There should be no ‘You can’t walk there, it’s off the map!’” These “chairs” are by no means meant for sitting. They consist of small-format, painted canvases, partially printed with texts by Art & Language. Each chair consists of nine canvases and each canvas is unique. Viewing the “chairs” creates an equation of several cultural views and definitions. There are paintings that do not hang on the wall, but become “work pieces” of a sculptural object that is not recognised exclusively as an artwork, but “appears” in the form of an object of everyday use. In this sense, the “chairs” simultaneously “occupy” several levels of meaning: contemplation and decoration, to “view an artwork” in the traditional sense and to “design” a space in this activity. In the sense of “indexing”, each of these “chairs” refers to a different work group or action by Art & Language.

Mathilde Rosier’s (FR 1973) group of new drawings belongs to her series In the Fields of Intensive Prosperity created between 2019 and 2021. The works refer in a disturbing way to the aggravation of our existence on earth, between culture and nature, a globalized and digitized world, impacted by the climate crisis, the pandemic and the exploitation of natural resources, compounded not least by intensive deforestation and the industrialized production of food, which also affects agriculture. In this field of tension, Mathilde Rosier creates her fantastical pictorial narratives that, despite the seriousness of the theme, display the scenario of a hopeful future, but one in which we must stay alert.

With her videos, drawings and photographs, Ketty La Rocca (1938-1976) already in the 1960s developed a form of nonverbal, gestural communication free of any social limitations. The five-part work “Le mie parole e tu (My Words and You, 1972)” was made in conjunction with the film “Appendice per una Supplica (Appendix for a Supplication)” which was screened at the Biennale di Venezia in 1972. In each picture, one sees the interplay of a female and male hand “together” counting from zero to four. Counting with the hands is until today one of the basic forms of nonverbal communication. The work also shows in a very special manner the interplay of a dialogue between “me” and “you” which so characteristic of La Rocca.