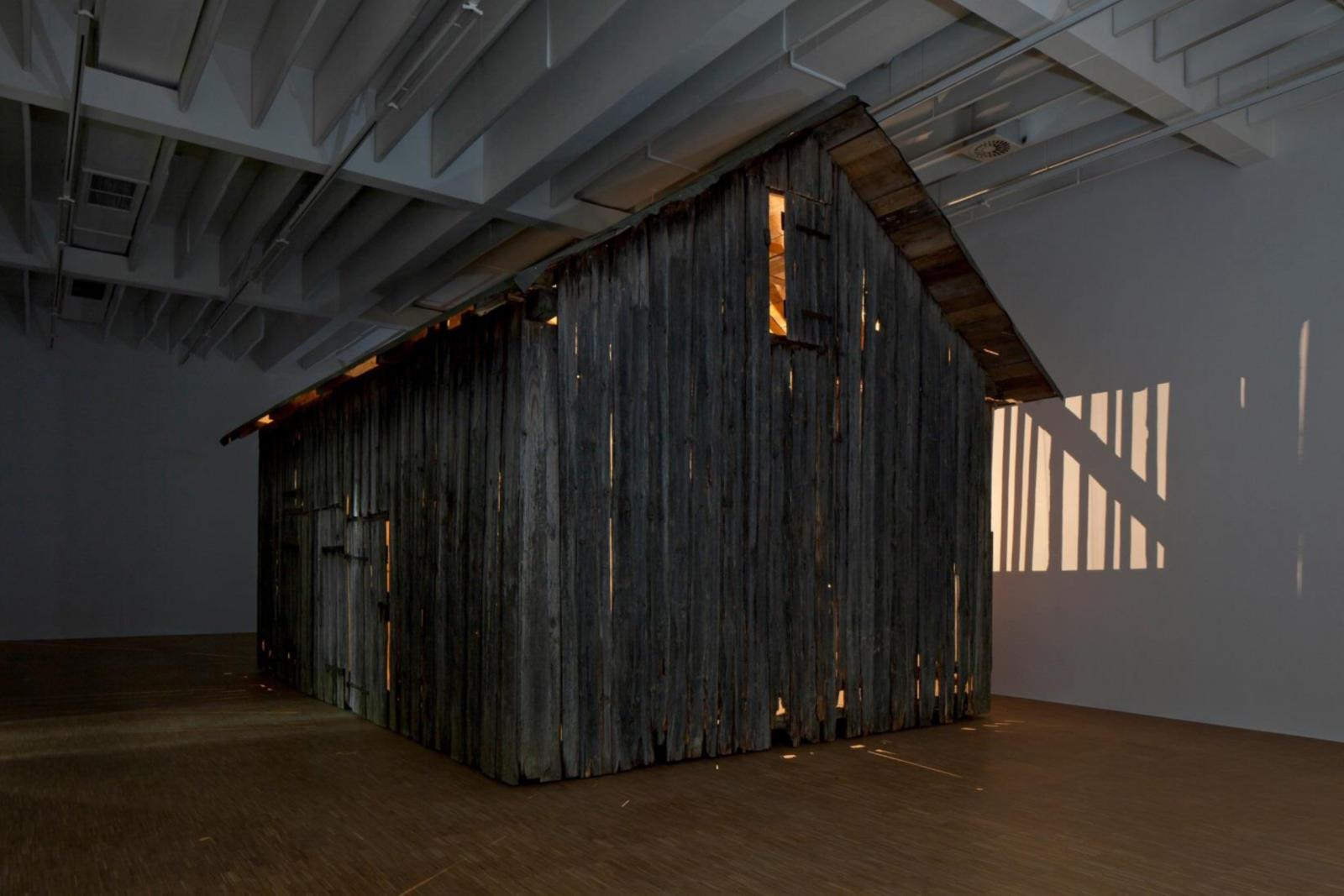 On the occasion of Paloma Varga Weisz’s first solo exhibition in France, the Consortium Museum presents Glory Hole, a monumental installation that incites visitors to indiscretion.

Paloma Varga Weisz (b. 1966, Mannheim, Germany) grew up in a prolific art environment, influenced by an artist father of Hungarian descent, Ferenc Varga, and his circle of friends comprised of Henri Matisse, Jean Cocteau and Pablo Picasso. At 21 she learned woodcarving, a technique that remained at the core of her later practice. Yet Varga Weisz’s work is equally concerned with other media such as drawings, installations, watercolors, and more recently videos.

Erected in the Consortium Museum’s “White Box,” Glory Hole takes the shape of a large-scale rustic cabin, in which the roughly-assembled boards made of dark wood let slip through a few rays of light emanating from the inside. The artwork, which was shown for the first time in 2015 at the Salzburg Kunstverein (Austria) and presented more recently at the Bonnefanten Museum in Maastricht (Netherlands, 2019), is inspired by the artist’s research in the Austrian countryside, where the cabin was collected and later transported to its subsequent exhibition spaces. Impressive yet impenetrable, the installation is activated by the visitors’ curiosity. To discover its contents, viewers are invited to approach the structure and look inside through its various suggestive apertures ––gaps in construction, and the glory holes intended for that exact purpose.

Through the viewers’ inquisitive eyes, two dimly lit rooms are revealed, featuring several wholly fabricated characters. Two human-size puppets, reduced to mechanical sexual gestures, are animated by cables hanging from the ceiling. These two figures highlight Varga Weisz’s sculptural skills, who often works with linden wood for its sleek touch and aspect. They also illustrate Varga Weisz’s attentive focus on questions of gender and identity; here the characters’ only role is limited to their sexual function. With a face distorted by a prominent penis, agitated by repetitive jerks, one of the sculptures embodies a ludicrous, exacerbated virility. The presence of two taxidermy monkeys adds to the absurdity of this mise-en-scène.

The cabin’s environment remains familiar however, as it recalls the rural interior of an old rustic dwelling where hunting trophies are used as home décor. On the walls the heads of animals that are traditionally hunted (a boar, a deer and a pheasant) may be identified, next to domesticated ones (two hunting dog breeds). This sophisticated mise-en-scène seems to be only disturbed by the viewers’ indiscretion.

Glory Hole’s narrow perspective restricts the experience of the artwork to what amounts to an indicial observation for the viewer, as some spaces remain inaccessible. This fragmentary vision calls up confusing feelings, between unease and nostalgia, triggered by a décor that resembles an obscene fairy tale. Yet as is always the case with Paloma Varga Weisz’s work, an indefinable, vivid feeling of uncanny emerges, evoking both familiar and absurd elements.

The artist gathers these anthropomorphic and bestial figures alike to create a vulnerable world where the body is explored, its limbs distorted and its functions upended. Glory Hole invites the viewer to a unique experience with a strong narrative potential, making visible the artist’s interest in pure materials, technical precision and a fascination for the body.

Some of the artworks in this exhibition may be disturbing to visitors, particularly children. Discretion advised.