Qalqalah: More Than One Language 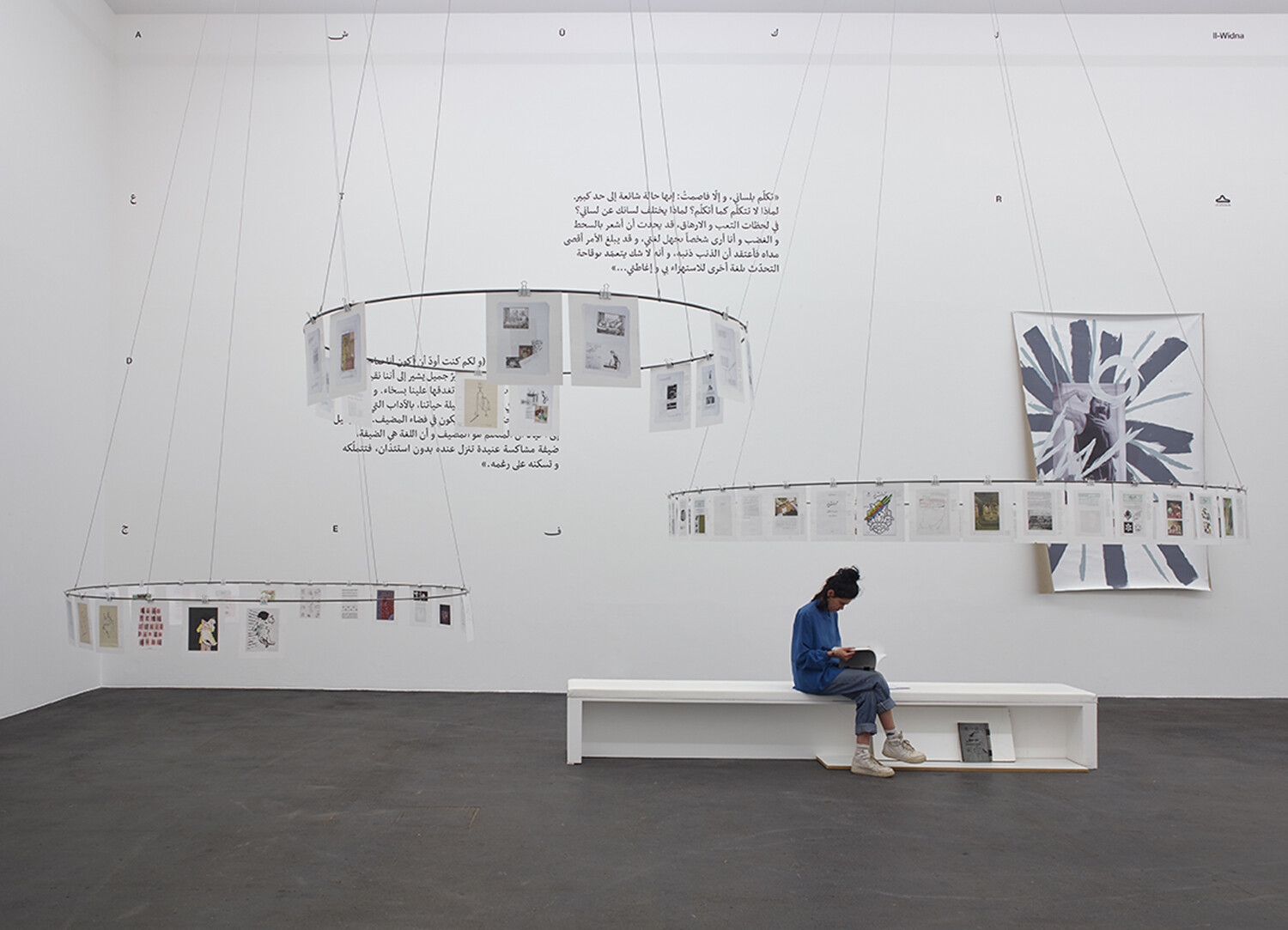 The name Qalqalah comes from two short stories by Egyptian curator and researcher Sarah Rifky[1]. The eponymous heroine of these works of fiction, Qalqalah, is an artist and linguist who inhabits a near future reconstructed by the financial crisis and the popular revolts of the 2010s. Her poetic meditations on languages, translation, and their critical and imagining power accompanied our reflections, and have stayed with us ever since. Qalqalah became an online research platform involving three languages (Arabic, French and English) and two alphabets. It is now taking the form of an exhibition.

The title Qalqalah: plus d’une langue [Qalqalah: More Than One Language] orchestrates a meeting between our heroine and a quote by Jacques Derrida. In Monolingualism of the Other[2], the philosopher, born in 1930 in Algeria, writes of his ambiguous relationship with the French language, ensnared in military and colonial history. The book begins with a paradoxical statement: “I have only one language; it is not mine,” contradicting any proprietary, fixed or unequivocal definition of language—whether it be French (as the researcher Myriam Suchet nicely puts it, the “s” in “français” should be understood as a mark of plurality), Arabic (taught as a “foreign language” in colonial Algeria, and today the second most widely spoken language in France, in its various dialects) or English (a globalised language that is dominant in contemporary art).

These three languages (and more) will come together in the exhibition, each bringing its own political, historical and poetic issues that intersect and respond to one another. Letters and voices will run through the exhibition, reminding us that languages are inseparable from speaking and listening bodies—all speakers express themselves “also through their eyes and facial expressions (yes, language has a face)”[3], to borrow the words of Moroccan writer and researcher Abdelfattah Kilito.

The works echo multiple, hybrid languages, acquired in the course of family migrations, personal exile or uprooted encounters. Native, secondary, adoptive, migrant, lost, imposed, common, minor, invented, pirated, contaminated languages... How do we speak (to each other) in more than one language, using more than one alphabet? How do we listen from within the place and language in which we find ourselves? Between the lines, the exhibition examines the perspective from which we view works, according to the political and social imaginations that shape us.

After an initial presentation at the Centre Régional d'Art Contemporain Occitanie in Sète in 2020, Qalqalah: plus d’une langue is now presented at the Kunsthalle in resonance with the Alsatian context. Mulhouse is historically working-class and a multilingual European border city: in addition to the traditional Germanic and Frankish dialects, German, English, Arabic and Turkish can be heard there. The exhibition will be accompanied by a workshop and a public event with Achim Lengerer/Scriptings.

About “Qalqalah”
Qalqalah is an editorial and curatorial platform dedicated to the production, translation and circulation of artistic, theoretical and literary research in three languages: French, Arabic and English. It was founded in 2018 in France by Virginie Bobin (curator, researcher and translator) and Victorine Grataloup (curator, researcher and teacher). Today, the editorial collective of Qalqalah consists of Line Ajan, Virginie Bobin, Montasser Drissi, Victorine Grataloup, Vir Andres Hera and Salma Mochtari.