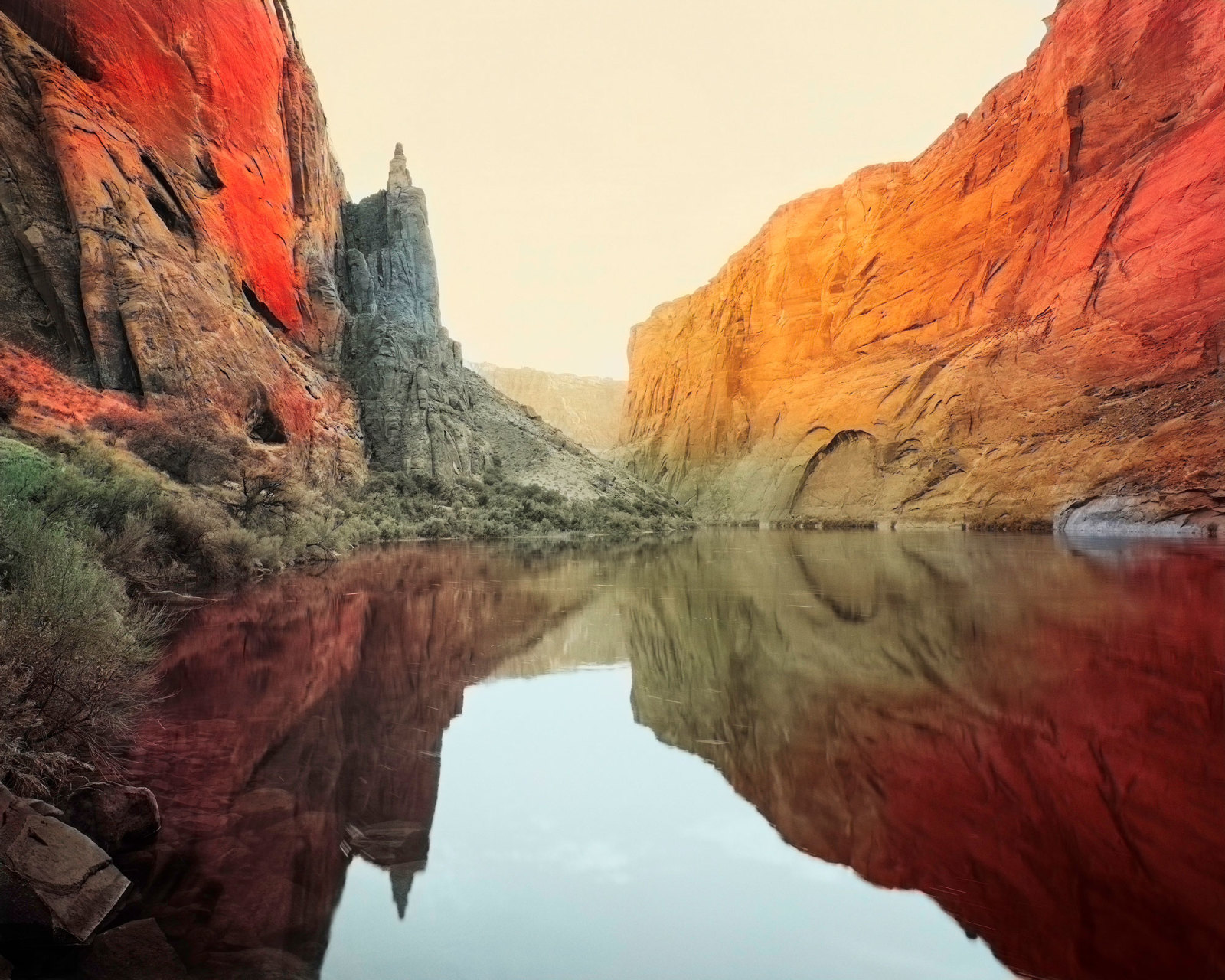 Altman Siegel is pleased to present a body of new work by artist Trevor Paglen. This will be his fifth exhibition at the gallery. Trevor Paglen’s new photographs position the origins of computer vision, facial recognition, and artificial intelligence in the tradition of landscape photography of the American West. Examining histories of seeing in relation to technological advancements, Paglen reveals underlying structures of power and the changing role of the image.
Capturing dramatic vistas shot around Yosemite, Black Canyon, the California Coast, and other iconic landscapes, Paglen refers to classic works by Muybridge, O’Sullivan, Watkins, Hillers, and other 19th century “frontier” photographers. While we often encounter these historical referents in a museum setting today, many of these seminal images were originally produced for the US Department of War on military “reconnaissance” surveys and are embedded with the colonial narratives of Western Expansion. What would a contemporary iteration of frontier photography reveal about our current structures of power?
With the advent of computer vision and artificial intelligence, the role of images and photographs has changed dramatically. From industrial fabrication and self-driving cars to facial recognition and biometric surveillance, computer vision algorithms are working invisibly in our daily lives. Paglen investigates the formal and conceptual logics of computer vision and AI by using modified machine vision software to produce images revealing the internal mechanisms of the algorithms. Returning to the western landscapes captured by his predecessors, Paglen translates his 8x10 negatives into digital files that can be read by AI. He then overlays lines, circles and strokes that signify how computer vision algorithms attempt to “see” by creating mathematical abstractions from images.
For many of the photographs, Paglen employs printing methods of the 19th century. Each edition is processed by hand using sunlight per traditional albumen and carbon printing techniques. The resulting photographs resemble their historical precedents, while revealing the changing face of image culture as it is increasing interpreted by machine vision.
Where the landscapes refer to the history of western photography as an aspect of territorial control, so we find another form of extraction and coercion embedded in a new series of portraits. Photographs in the series They Took the Faces from the Accused and the Dead are based on National Institute of Standards and Technology’s Special Database 18, a collection of 3248 mug shots that constitute a standard database for the promotion of research into facial recognition. To create facial-recognition software, computer scientists and software engineers need large collections of faces as “training images.” Before the advent of social media, a common source of faces for this research came from these mug shots of accused criminals. In a very real sense, facial-recognition software is built upon the faces of prisoners.
Paglen mines the history of photography, both for its physical production and its subject matter, to construct questions around seeing. Concerns about surveillance and privacy, freedom and servitude continue to resonate as the two series of works, western landscapes and mug shots create a contemporary questioning and retelling of the archetypal story of the ‘Old West.’
"I think that for me what unites the works in this exhibition it’s something to do with the relationship between photography, computer vision, and extraction.
If we look at real-life forms of computer vision, let’s ask what they’re designed to do. We might say 'oh they’re for navigating cars, or for doing quality control for manufacturing, or for recognizing objects or whatever' – I think to that I’d say: no, these forms of 'seeing' are mostly about doing one of two things, often in tandem. First, making money. Second, increasing the efficiency of centralized forms of power, for example the police or the military. And that this has a long history – that the 19th Century photos I reference in this body of work were part of efforts led by the Department of War to map the west and to figure out how to mine it and settle it. The photographs of prisoners were meant to make policing more effective and more powerful.
This body of work for me is about trying to see how photography and power were coupled together in the past, and to think about how those couplings might be taking place now in the age of computer vision and AI."
-Trevor Paglen


Trevor Paglen has exhibited in numerous international museums, galleries and institutions including the Metropolitan Museum of Art, New York; The Tate Modern, London; Whitechapel Gallery, London; The Barbican Centre, London; Prada Foundation Osservatorio, Milan; Nam June Paik Art Center, Korea; Museo Tamayo, Mexico City; Lentos Kunstmuseum Linz, Austria; Smithsonian American Art Museum, Washington, D.C.; The National Museum of Art, Architecture and Design, Oslo; ZKM, Karlsruhe; Kunstverein Hannover; Kunsthalle Winterthur; Frankfurter Kunstverein; The Walker Arts Center, Minneapolis; The San Francisco Museum of Modern Art; The MCA Chicago and many others. He has also been included in the 2008 Taipei Biennial; the 2009 Istanbul Biennial; the 2012 Liverpool Biennial; the 2016 Venice Biennial of Architecture; the 9th Berlin Biennial; Manifesta: The European Biennial of Contemporary Art 2016, Zurich; The Gwangju Biennale, 2016 and 2018; and the 2019 Art Encounters Biennial, Timișoara, Romania. His work has appeared in The New York Times, The Wall Street Journal, The New Yorker, Artforum, Frieze, The Guardian, The Atlantic, Bomb, October, Wired and The New Inquiry in addition to many other publications. Paglen was the recipient of the 2016 Deutsche Borse Prize, 2018 Nam June Paik Art Center Prize and was named a MacArthur Fellow in 2017. He holds a B.A. from U.C. Berkeley, an M.F.A. from the Art Institute of Chicago, and a Ph.D. in Geography from U.C. Berkeley. Paglen’s work is concurrently on view in Uncanny Valley: Being Human in the Age of AI at the de Young Museum, San Francisco and Art in the Age of Anxiety at the Sharjah Art Foundation.

The Art Angle, a podcast from Artnet News, recently featured Paglen in "Why Artist Trevor Paglen is Doing Everything He Can to Warn Humanity About Artificial Intelligence." Listen on the Artnet News website, Apple Podcasts, Spotify, or Soundcloud.

We are pleased to announce that Altman Siegel is now open to visitors by appointment.