Yoko Ono’s RELAX. YOUR HEART IS STRONGER THAN WHAT YOU THINK ! 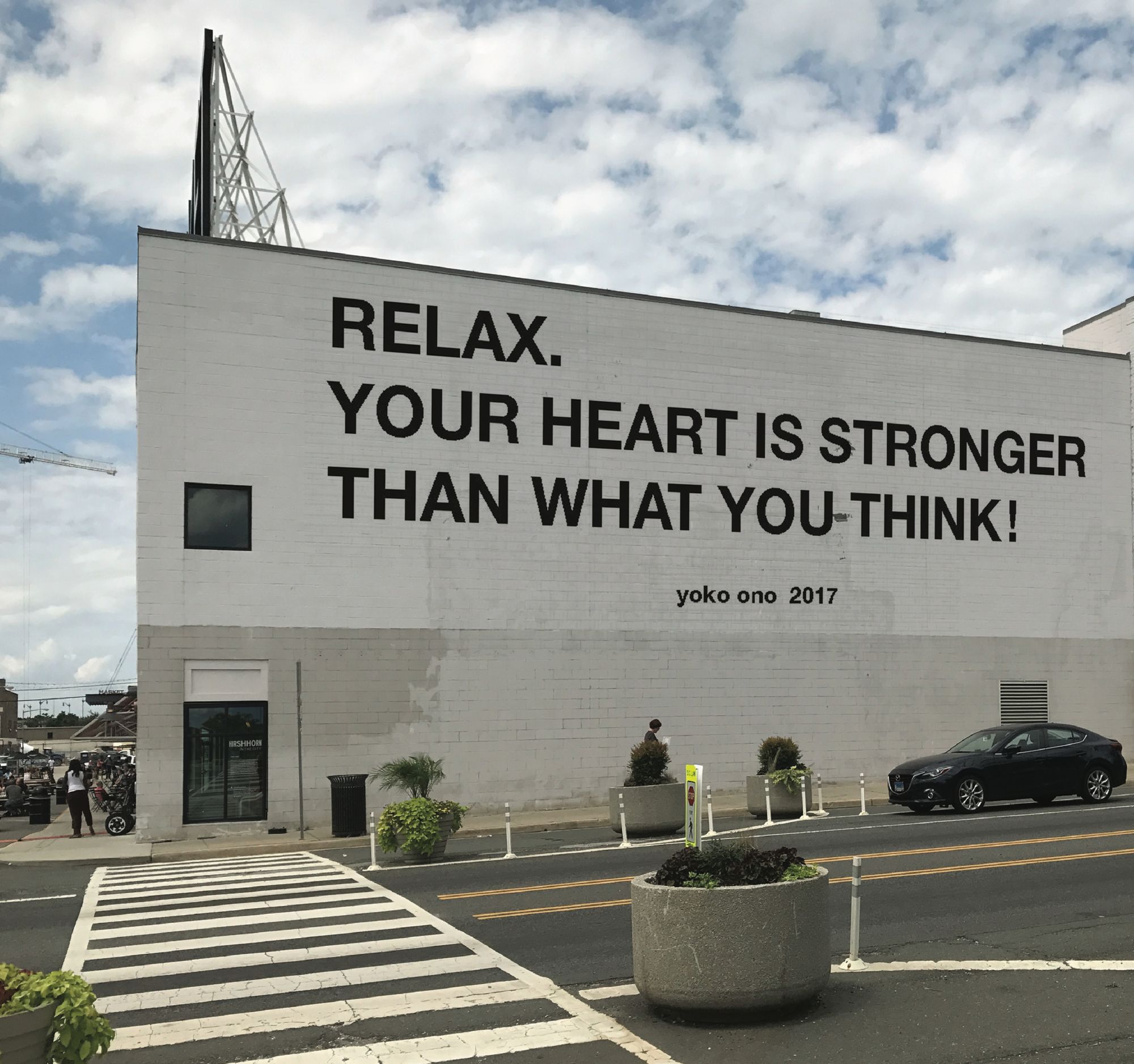 Yoko Ono’s RELAX. YOUR HEART IS STRONGER THAN WHAT YOU THINK !
Yoko Ono To Create New Large-Scale Public Artwork for DC
Hirshhorn Partners With Union Market To Debut Mural Sept. 15

The Hirshhorn Museum and Sculpture Garden will partner with Washington, D.C.'s Union Market to present the world debut of a new large-scale public-art mural by artist Yoko Ono, opening Friday, Sept. 15, along the Market's Sixth Street N.E. exterior wall. The installation is the inaugural project of Hirshhorn in the City, a new initiative to exhibit international contemporary art beyond the museum walls and connect artists and curators with the city's creative communities.

"RELAX. YOUR HEART IS STRONGER THAN WHAT YOU THINK !," created exclusively for Washington, will use original text to transform nearly 1,000 square feet of the Northeast destination into a striking work of conceptual art. Its opening is timed to coincide with the final weekend of the Hirshhorn exhibition "Yoko Ono: Four Works for Washington and the World," which closes Sept. 17, and celebrates of the 10th anniversary of Ono's iconic "Wish Tree," a permanent installation in the museum's year-round sculpture garden.

Said Ono on her inspiration, "I hope our hearts will be stronger and stronger forever."

"The Hirshhorn is much more than iconic architecture and a world-class collection," said Hirshhorn director Melissa Chiu. "Our goal is to bring people and ideas together to shape 21st-century culture, and Washingtonians are an incredible source of creative innovation. Union Market fully embraces this aspect of the city, making it an ideal home for Ono's newest work."

Ono (b. Tokyo, 1933) is an artist, peace activist and human rights worker who has strongly influenced the feminist movement. Since the late 1950s, she has been a forerunner of Conceptual art, often using collaboration, audience participation and social activism to challenge viewers' understanding of art and the world around them. Ono's work is in the collections of many major contemporary museums. "RELAX. YOUR HEART IS STRONGER THAN WHAT YOU THINK !" is one of at least two Washington public murals devised by the artist, their daily lives and consider the power of the heart over the restrictions of the mind.

Hirshhorn in the City allows the museum to experiment with projects, partnerships and installations to create more ways for Washington residents to discover international contemporary art, sparking inspiration in the everyday.

The initiative builds on the recent success of a massive public-art installation that wrapped the L'Enfant Plaza Metro station with Japanese artist Yayoi Kusama's psychedelic "Dots Obsession," presented by the Southwest BID as an extension of the museum's record-breaking exhibition "Yayoi Kusama: Infinity Mirrors."

About the Hirshhorn
The Hirshhorn Museum and Sculpture Garden is the national museum of modern and contemporary art and a leading voice for 21st-century art and culture. Part of the Smithsonian, the Hirshhorn is located prominently on the National Mall in Washington, D.C. With nearly 12,000 paintings, sculptures, photographs, mixed-media installations, works on paper and new media works, its holdings encompass one of the most important collections of postwar American and European art in the world. The Hirshhorn presents diverse exhibitions and offers an array of public programs on the art of our time - free to all, 364 days a year. For more information, visit hirshhorn.si.edu.

About Union Market
The Union Market District, located a short walk from the NoMa/Gallaudet metro, is one of DC's most vibrant, diverse and thriving neighborhoods-a living laboratory for a sustainable urban community and place for creative minds and businesses to connect, thrive and make DC their own. Since opening in September 2012, The Market at Union Market, the acclaimed food market with over 40 local artisans, now averages 20,000 visitors per weekend and has hosted over 400 events. For more information about Union Market, visit www.unionmarketdc.com.