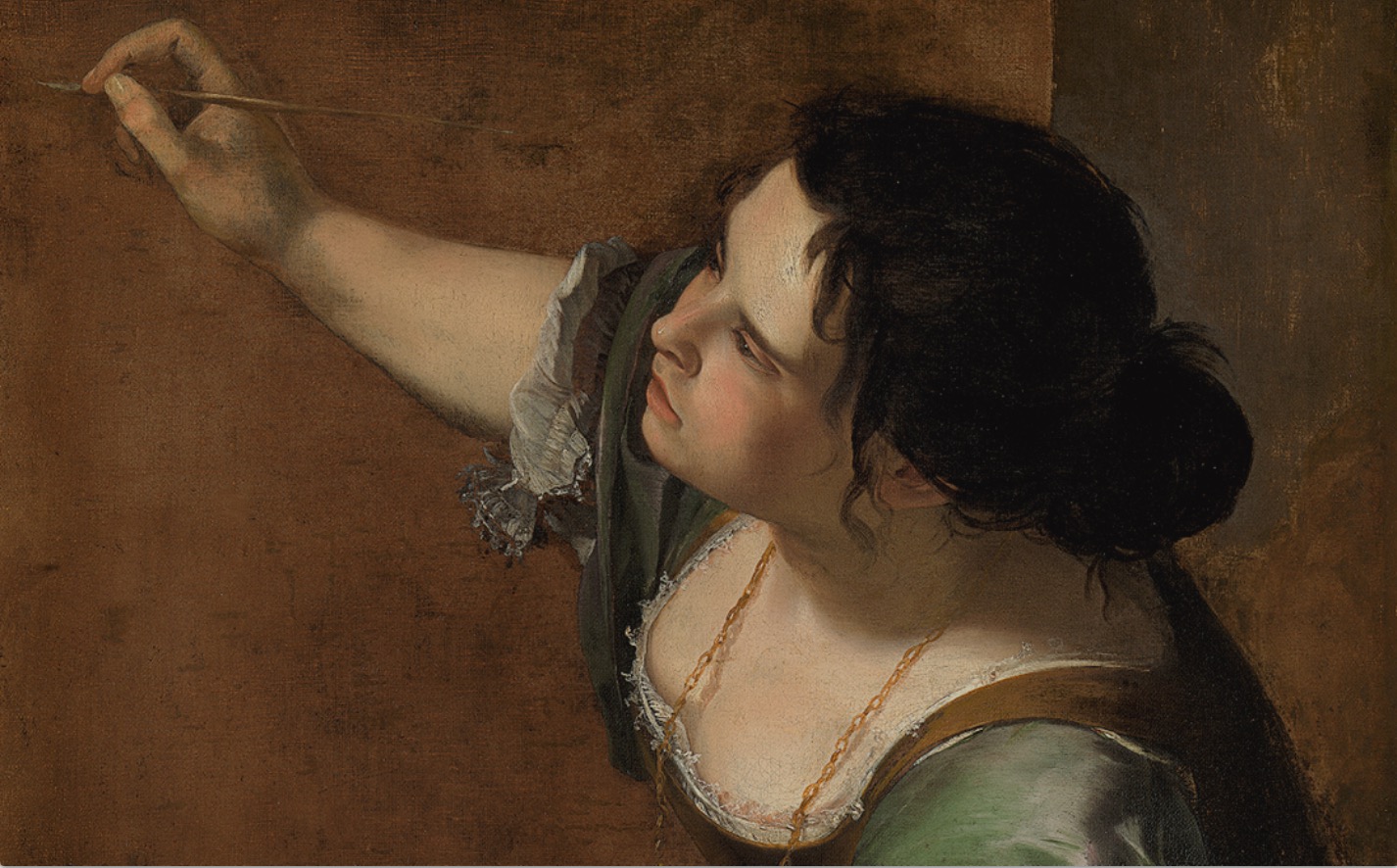 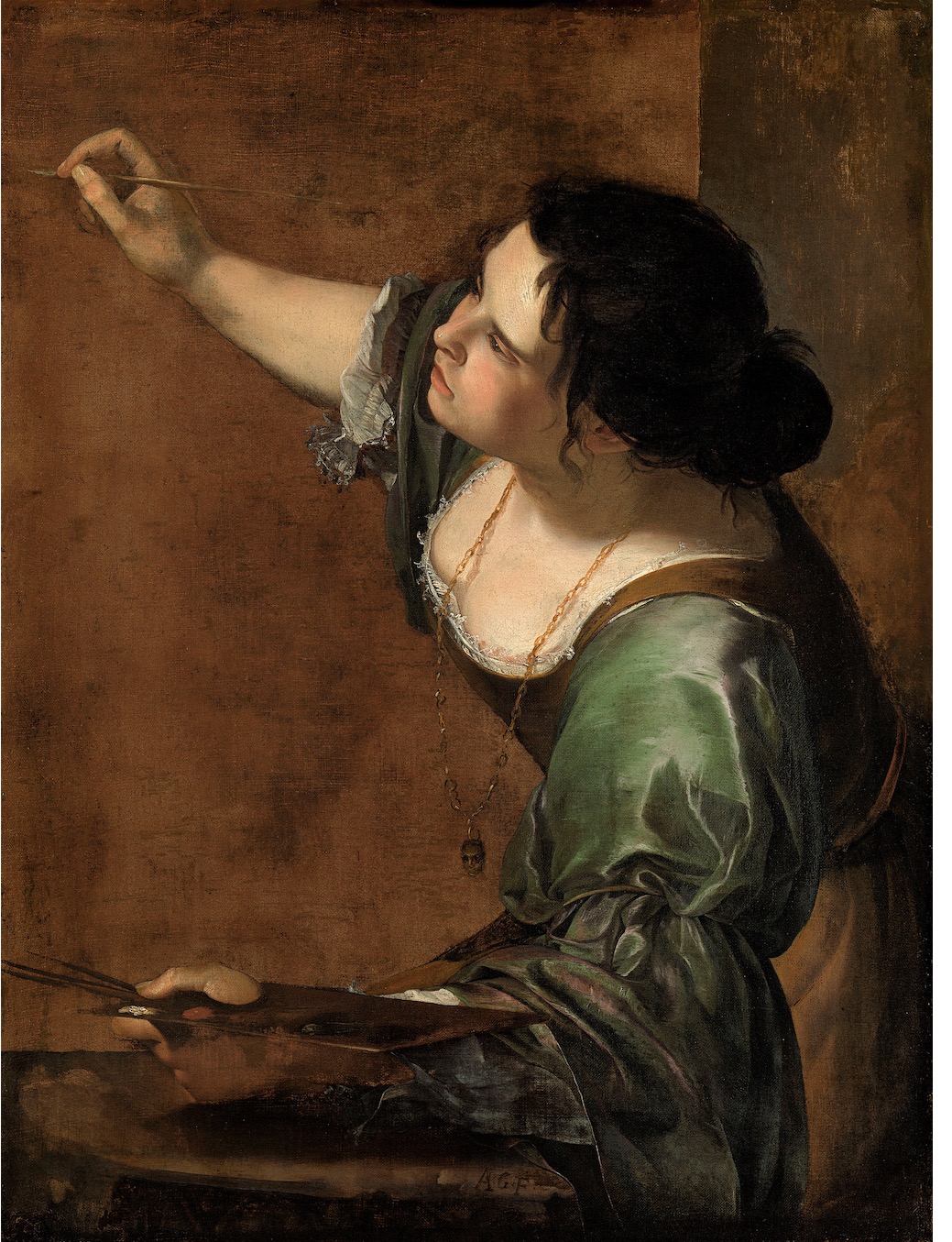 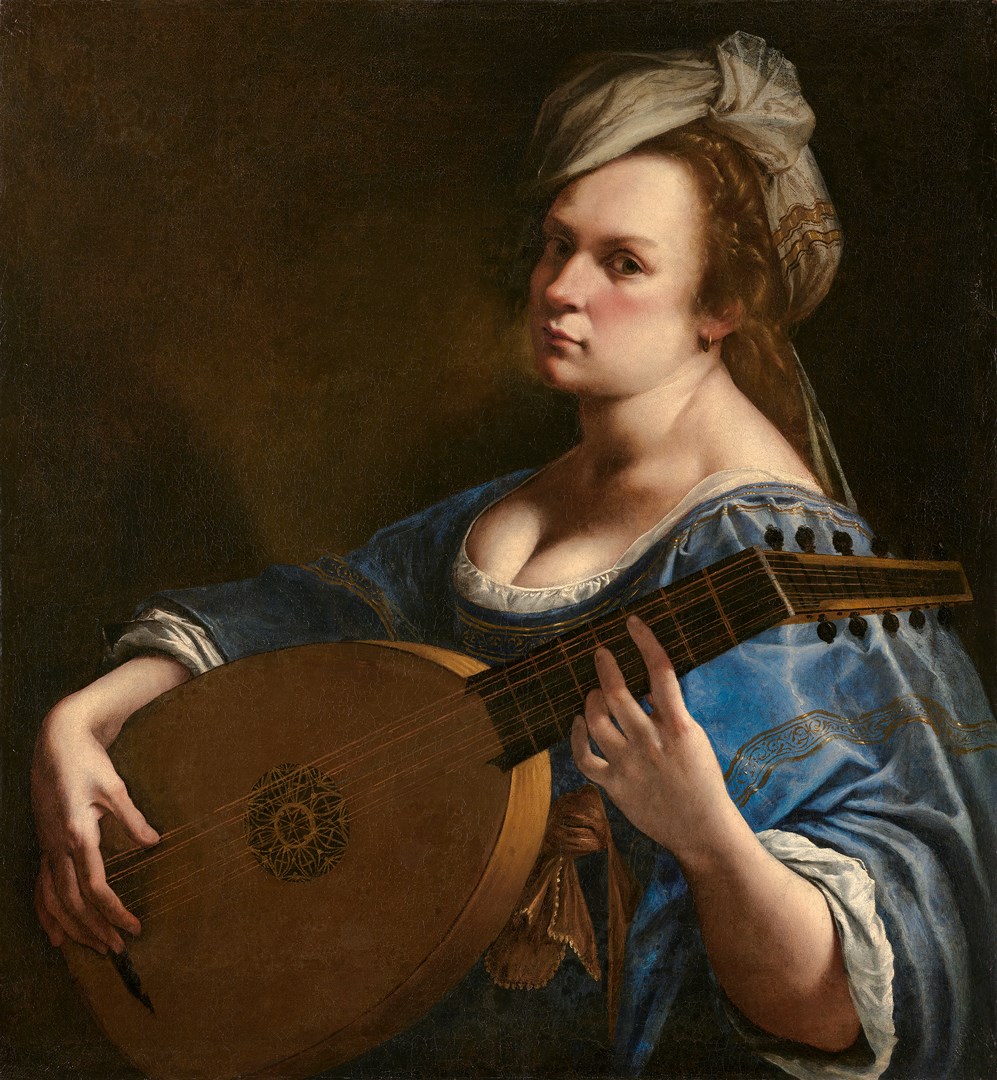 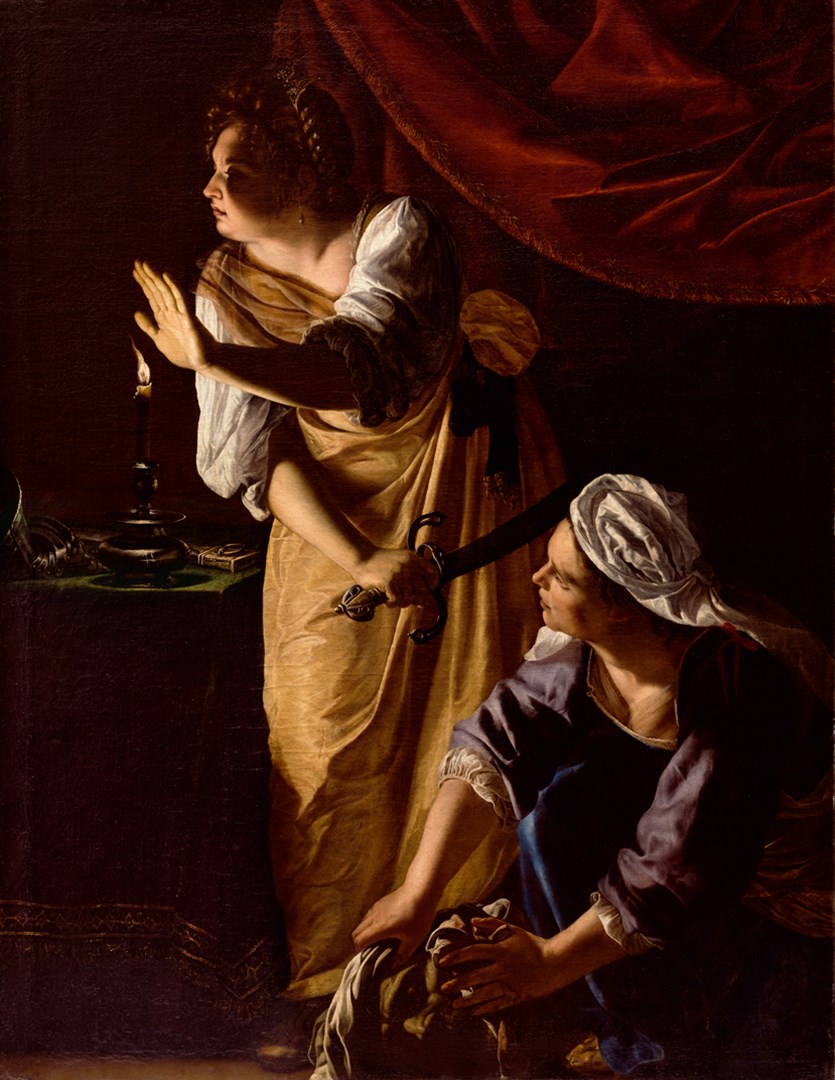 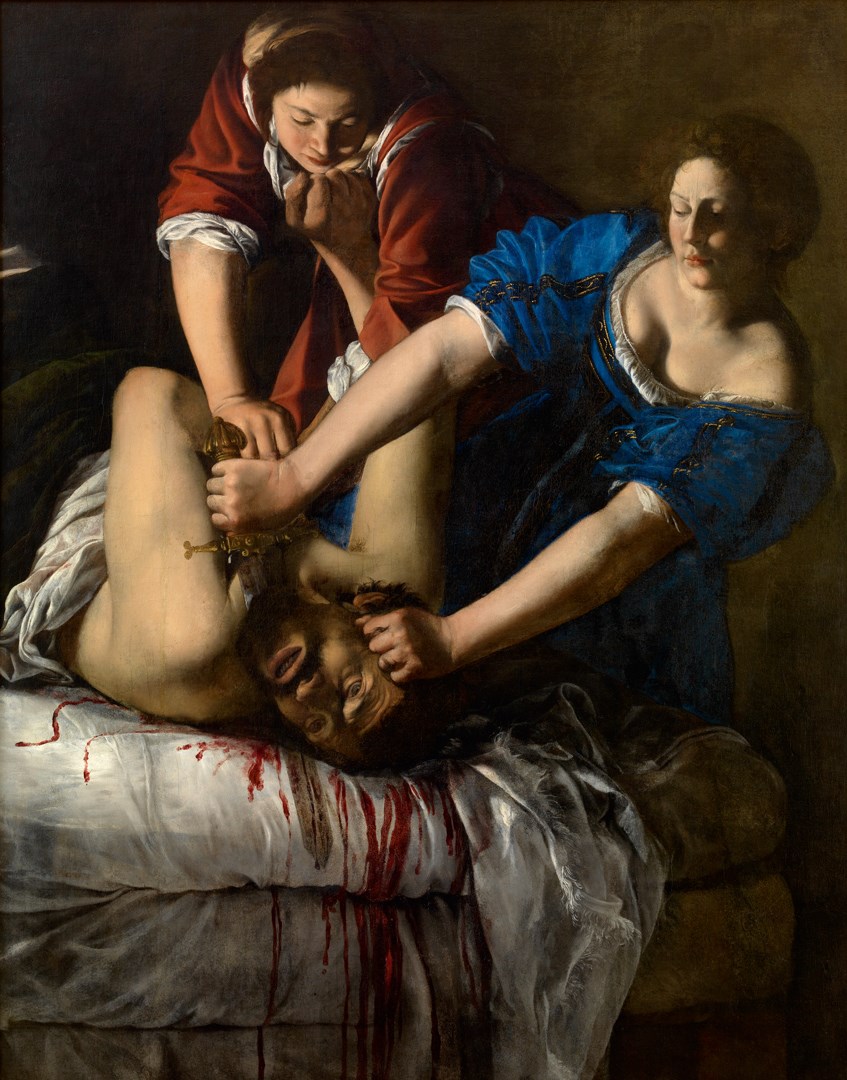 ‘I will show Your Illustrious Lordship what a woman can do’
(Letter from Artemisia Gentileschi to Don Antonio Ruffo, 7 August 1649)

For the first time in the UK, a major monographic exhibition of the work of Artemisia Gentileschi (1593–1654 or later),will open at the National Gallery in April 2020.

The inspiration for this exhibition is the National Gallery’s recent acquisition of Artemisia Gentileschi’s Self Portrait as Saint Catherine of Alexandria(about 1615–17), the first painting by the artist to enter a UK public collection.

At a time when women artists were not easily accepted, Artemisia Gentileschi was exceptional. Her career spanned more than 40years and she gained fame and admiration across Europe, counting leading rulers among her patrons. She was the first woman to gain membership to the artists’ academy in Florence.

Although Artemisia was greatly admired during her lifetime, she was essentially rediscovered in the 20th century. Certain elements of her biography–particularly her rape as a young woman and the torture she endured during the trial that followed–have sometimes overshadowed discussions about her artistic achievements, but today she is recognised as one of the most gifted painters of the Italian Baroque period. Her art and life continue to inspire novels, films, documentaries, musical and theatrical productions.

‘with me Your Lordship will not lose and you will find the spirit of Caesar in the soul of a woman’
(Letter from Artemisia Gentileschi to Don Antonio Ruffo, 13 November 1649)

Artemisia will present a highly selective survey of the artist’s career, bringing together around thirty of her works from both public institutions and private collections around the world-the majority of the loans in the exhibition have never been seen in the UK before.

The earliest work in the exhibition will be her first signed and dated work, Susanna hand the Elders (1610, Kunstsammlungen Graf von Schönborn, Pommersfelden) painted when she was just 17. Artemisia returned to this subject throughout her career, approaching its story afresh with each retelling, and her last-known painting, of the same subject, dating from 42 years later, will also be included in the exhibition(Susanna hand the Elders, 1652, Polo Museale dell’Emilia Romagna, Collezioni della Pinacoteca Nazionale, Bologna).

Visitors will be invited to get to know Artemisia more fully ‘in the round’ –appreciating her wit, passion and resilience, as well as her vulnerability-through a number of her recently discovered personal letters, especially conserved for the show.

The exhibition is arranged broadly chronologically, starting with Artemisia’s training in Rome, where she learnt to paint under the guidance of her father Orazio, whose Judith and her Maid servant (about 1608, The National Museum of Art, Architecture and Design, Oslo) will be on display beside Artemisia’s earliest paintings. In addition to her Susannah, the first room will also include her Cleopatra (about 1611-12, Etro Collection) and Danaë (about 1612, Saint Louis Art Museum, Museum Purchase).

Many of Artemisia’s paintings have been read in the past as autobiographical and there is no doubt that her personal identity is closely intertwined with her artistic production. This is especially true of the paintings she produced in Florence (1612/13-20), where she repeatedly used her own image; perhaps as a vehicle for self-promotion.

The room dedicated to her Florentine period (Becoming Artemisia in Florence) opens with a trio of works for which she is the model, and which all date from the mid-1610s -Self Portrait as a Female Martyr (Private collection USA), Self Portrait as a Lute Player (Wadsworth Atheneum Museum of Art, Hartford, CT. Charles H. Schwartz Endowment Fund) and Self Portrait as Saint Catherine of Alexandria (The National Gallery, London). Nearby will also be displayed her Saint Catherine of Alexandria (Gallerie degli Uffizi, Florence) which, as recent scientific analysis in Florence and London has shown, is closely related to the National Gallery’s own self portrait.

This room will also include one of the undoubted highlights of the exhibition, bringing side by side for the first time in the UK the two versions of Artemisia’s most famous and iconic composition of Judith beheading Holofernes (one about 1612-13 Museo e Real Bosco di Capodimonte, Naples and the other about 1613-14, Gallerie degli Uffizi, Florence). In this depiction of female determination over brute strength, Artemisia spares us none of the gore. Blood streams down the white bedsheets as the Assyrian general Holofernes writhes under the weight of Judith's maid servant. Blood spatters Judith's clothes as she grasps the sword with one hand and pulls his hair with the other, a look of determination on her face. The visceral violence of these paintings has frequently been interpreted as Artemisia taking revenge in paint, translating onto canvas her own experience of physical attack. Judith and her Maid servant with the Head of Holofernes (about 1623-25, Detroit Institute of Arts, Gift of Mr. Leslie H. Green), a Caravaggesque masterpiece which shows a moment later in the narrative, just as Judith prepares to make her escape from the enemy camp with Holofernes’s head, can be seen in a nearby room of the exhibition.

‘...a woman’s name raises doubts until her work is seen...’
(Letter from Artemisia Gentileschi to Don Antonio Ruffo, 30 January 1649)

Artemisia had enormous gifts as a storyteller and she brought an unprecedented, female, perspective to traditional subjects, many of which are drawn from the Bible or ancient history. Her paintings treat well-known themes often featuring female heroines –Judith, Susannah, Cleopatra, Lucretia – and Artemisia was able to get under the skin of her protagonists with astonishing sensitivity and truthfulness. Her ability to paint female figures of strength, passion and vulnerability remain a feature of her work throughout her career.

A room called The Hand of the Famed Artemisia considers the artist through the eyes of others – a 1625 ‘portrait’ drawing of her hand by the French artist Pierre Dumonstier II, The Right Hand of Artemisia Gentileschi Holding a Brush (The British Museum), a bronze medal Portrait of Artemisia Gentileschi (unknown artist, about 1625, The Stephen K. and Janie Woo Scher Collection, New York) and a Portrait of Artemisia Gentileschi with painter’s palette in hand by her friend, the French painter Simon Vouet (about 1623-6, Property of the Fondazione Pisa, exhibited at Palazzo Blu, Pisa). Here we also get to see Artemisia’s own handwriting – and ‘hear’ her voice-through a series of passionate letters to her Florentine lover Francesco Maria Maringhi, written between 1618 and 1620. These were only discovered in 2011and have never been seen outside of Italy (Archivio Storico Frescobaldi, Florence).

Two rooms of the exhibition will be dedicated to Artemisia’s time in Naples, the city in which she settled for the last 25 years of her life and where she established a thriving studio with her daughter Prudenza, also a painter. Here, Artemisia’s first altarpieces will be on show – Annunciation (1630, Museo e Real Bosco di Capodimonte, Naples) and Saint Januarius in the Amphitheatre at Pozzuoli (about 1635-7,Cathedral Basilica San Procolo, Diocese of Pozzuoli, Naples) – as well as works made in collaboration with other leading Neapolitan artists.

The exhibition will end with Artemisia’s brief trip to London, where she was reunited with her father just months before his death. It was here, at the court of Charles I of England, that she painted Self Portrait as the Allegory of Painting (La Pittura) (about 1638-9, The Royal Collection / HM Queen Elizabeth II), which has long been regarded as the pinnacle of her achievements. Although not a literal self portrait, it embodies the artist’s vision of painting as a physical and purposeful act and the inspired woman at her easel is unquestionably intended to refer to Artemisia herself.

‘I shall not bother you any longer with this womanly chatter, for the works will speak for themselves’
(Letter from Artemisia Gentileschi to Don Antonio Ruffo, 1649-51)

The exhibition is curated by Letizia Treves, the National Gallery James and Sarah Sassoon Curator of Later Italian, Spanish, and French 17th-century Paintings. She says: ”Artemisia is an inspirational figure of resilience and unbowed creativity in the face of exceptionally challenging odds. I hope that this exhibition will bring Artemisia’s artistic achievements to the fore, so that visitors can fully appreciate what a talented painter and extraordinary woman she really was.”

Dr Gabriele Finaldi, Director of the National Gallery, says: “The first exhibition devoted to Artemisia Gentileschi in Britain, a country she visited and worked in at the end of the 1630s, celebrates her astounding artistic achievements with a superb selection of her paintings. She was a remarkable and immensely admired artist in her lifetime and she is an inspirational figure in our own time.”

Michele Coppola, Executive Director Art, Culture, and Historical Heritage, Intesa Sanpaolo says: “The acclaim of Intesa Sanpaolo’s Progetto Cultura programme, its extraordinary exhibitions, and the reputation of its Gallerie d’Italia venues have ensured our Bank’s standing as a world class partner not only commercially but also in the field of art and culture. One concrete example of this is the collaboration that has developed in recent years with one of the most prestigious museums in the world today, the National Gallery in London. This is an important alliance which today celebrates one of the leading female talents of seventeenth-century Italy. This venture is further testament to Intesa Sanpaolo’s commitment to Italy’s artistic heritage, seeking inspirational ways to promote this invaluable asset both at home and abroad.“