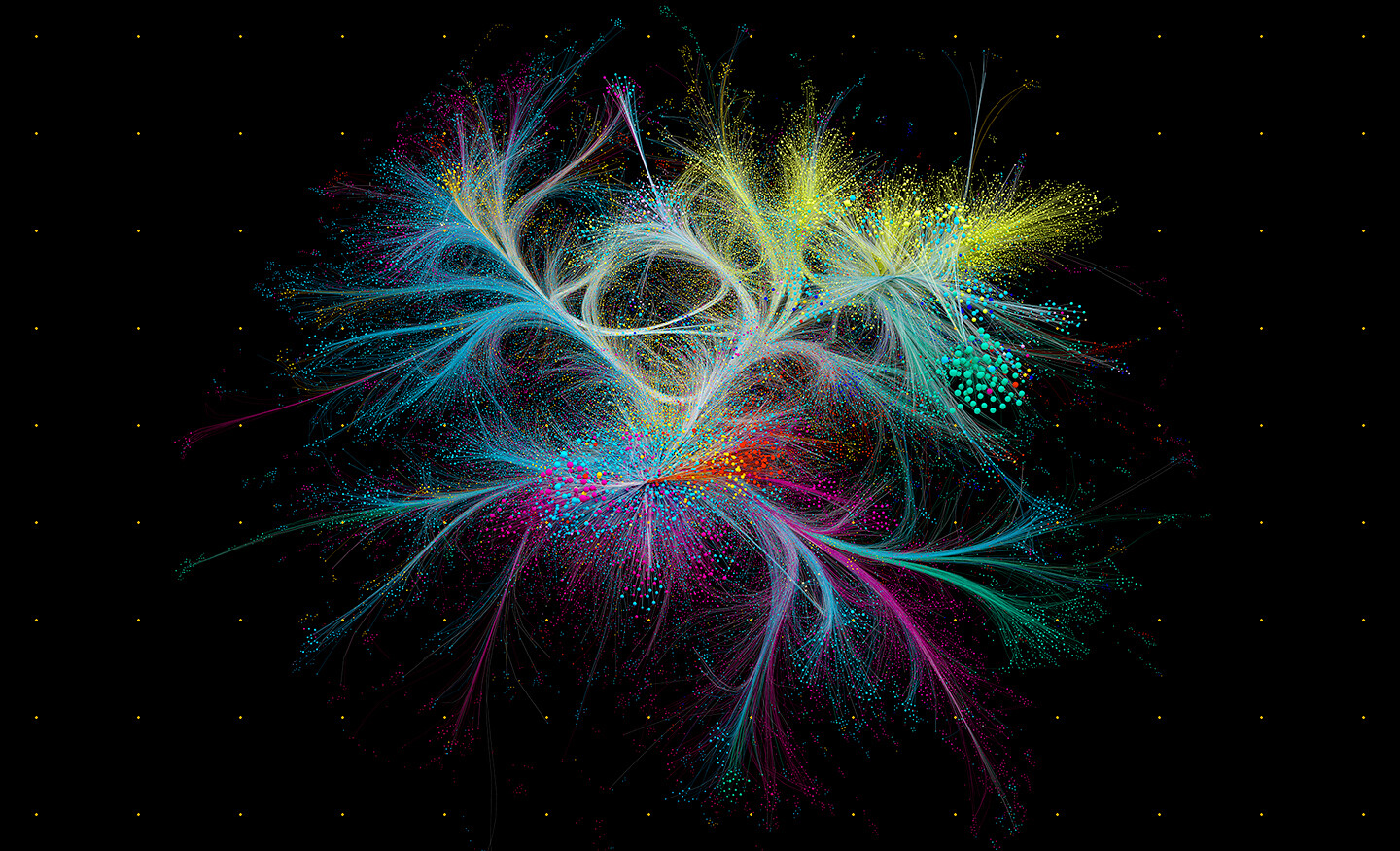 From May 1, 2021–January 16, 2021 the ZKM | Karlsruhe presents the exhibition BarabásiLab. Hidden Patterns, which introduces the work of the Hungarian physicist and network scientist Albert-László Barabási and his research laboratory, BarabásiLab, at Northeastern University in Boston, USA. The focus of the exhibition is the development of network visualization over the past 25 years. BarabásiLab. Hidden Patterns is in collaboration with the Ludwig Museum, Budapest, Hungary, where it is on show until June 20, 2021.

Data in our contemporary world grows exponentially. The quantity of data doubles every two years—an estimated 2.5 quintillion bytes of data are generated each day, with 90% of all digital data only created in the past 5 years. To cope with this astronomical amount of data, a new science is needed for us to make sense of it—data visualization. This tool allows data to be understood through networks, which take shape through interconnecting nodes and edges, producing unique shapes that illuminate previously invisible patterns. New developments in data visualization from BarabásiLab enable humans to process these vast data and distill them in ways that we can comprehend and utilize.

The innovative and interdisciplinary field of network science facilitates the analysis of various cultural and social phenomena through graphic representations of relationships between people, objects, or ideas. Data visualization explores the obscure and hidden patterns in nature, society, language, and culture. Barabási's network approach promises to deliver comprehensive methods that illuminate phenomena with both technical precision and aesthetic sensibility.

The exhibition offers a comprehensive overview of the field of network science developed by BarabásiLab, a collective of scientists and designers, including Kim Albrecht, Szu Yu Chen, Alice Grishchenko, and Mauro Martino. State-of-the-art data processing techniques give birth to network diagrams and structures that allow us to see the metaphorical forest through the trees. The works featured in the exhibition vary in media, and include prints, sketches, video renderings, as well as 3D printed data sculptures that encompass Barabási’s scientific and aesthetic oeuvre.

Albert-László Barabási (b. 1967, Cârța, Romania) originally studied sculpture before pursuing theoretical physics at the University of Bucharest and Eötvös Loránd University, Budapest. He later earned his PhD from Boston University. Barabási is world renowned in the scientific community for his contributions to network theory and data visualization since 1995. He is Professor of Network Science at Northeastern University, where he also directs the Center for Complex Network Research. His visualizations have been shown at the Serpentine Gallery in London and the Cooper Hewitt, Smithsonian Design Museum in New York City. He has also written several popular books, including The Formula (2018) and Bursts (2010), and is the author of the award-winning textbooks Network Science (2016) and Fractal Concepts in Surface Growth (1995).