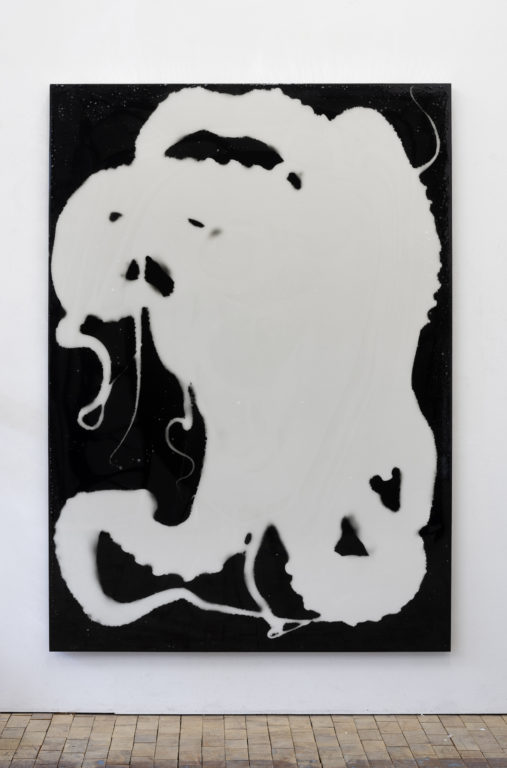 As if at an extispicy––the heart-wrenching procedure practiced in ancient times to predict the future through entrails––large-format octopuses are presented on epoxy impregnated panels, accompanied by mysterious black-brushed characters and simple pencil drawings of the mollusks. Ceramic eggs evoking fertility or, from a theosophical angle, the universe's origin are presented on the floor below. Whose future is being read here? Which cult is being joined? What Gods worshipped? Fabian Marti's exhibition is imbued with a visual mystery language that is both enigmatic and archetypal, leaving us with haunting, primary images that presumably have preoccupied mankind's oldest ancestors, echoing in our collective subconscious.

Octopuses always exerted a fascinating effect on humans, admired for their intelligence, stealth, and masterful coordination of their arms. The eight tentacles function like an extended brain, guided by a huge optic nerve and a highly developed tactile system, which explains their excellent vision and unerring sense of touch. The ongoing fascination for this furtive animal also echoes in the naming of the Calabrian Mafia, popularly known as La Piovra. The creature with eight tentacles is the perfect symbol for a highly effective network hiding in full sight, washing up an island of mental complexity. A memory system of a different nature is contained in the sixteen eggs displayed on the floor. Each of them has a slot and a code stamped on its surface, referring to a virtual address. A private key is deposited in its interior, consisting of 12 words, eventually giving access to a 1/100 of a bitcoin or 1 million satoshis. In between sculpture and investment, egg and non-tangible value, a symbol of fertility and a container for prosperity, Marti's ceramic ovals are open placements in both real and virtual space with a controversial twist: solely through the destruction of the tangible asset (the art object) can one access its non-tangible counterpart. Thereby Marti let art and cryptocurrency openly compete against each other.

Large slogan-like writings are placed on the gallery's walls, countering the invisible lexical codes hidden inside the eggs. Some of them are exclamations reading, e.g., ÂHHHHHHHH adorned with a circumflex; others are borrowed from Kundalini, such as ONG NAMO, an important yoga mantra. Mediating between graffiti, spirituality, and symbolist poetry, they add a critical synaesthetic element to the show. Marti's complex overlaying of systems, symbols, and (un)spoken words results in a fascinating confrontation of value and belief, physical objects versus virtuality, life, and machine. The extended brain of the octopus is watching over the incubated human-made blockchain, laying bare their interconnectivity and interdependence as part of the same dark ecology.
Gianni Jetzer

Fabian Marti was born in 1979 in Fribourg, Switzerland. From 2002 to 2006, he attended the Zürich University of the Arts (Zürcher Hochschule der Künste) and in 2008 the Mountain School of Arts in Los Angeles. He lives and works in Switzerland.

Marti works in sculpture, video, installation, and photography. His work oscillates between geometric formalism rooted in op-art and organic forms stemming from the subconscious. Using his materials to create imposing structures, Marti sometimes fills exhibition spaces with his complicated constructions, subverting the traditional mode of hanging works on walls and inviting visitors to enter his singular artistic world. He strives to connect with nature, aiming to communicate with its essence via ephemeral constructions for the use of other artists.

Gianni Jetzer
Gianni Jetzer is the incoming Director of Kunstmuseum St. Gallen. After being at the helm of Kunsthalle St. Gallen for five years, he directed Swiss Institute, New York from 2006 to 2013. Since then he has worked as an independent curator and, from 2014 on, as Curator-at-Large at the Hirshhorn Museum and Sculpture Garden in Washington, DC.