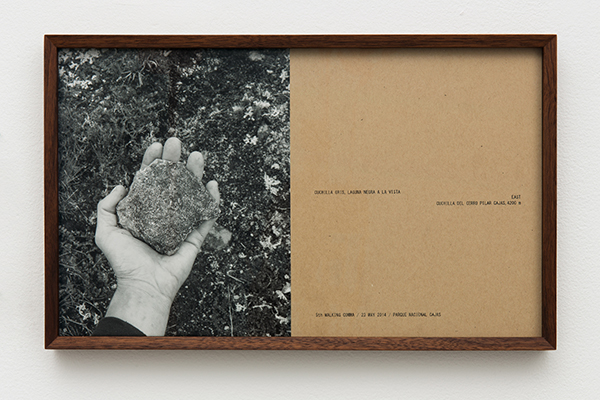 The work presented here by artist Helen Mirra is the result of more than nine years during which her daily activity has been to walk through different topographies. Walking, writing, and weaving: all everyday activities, all performed in the present tense, producing a record of time through action, a sort of meditation in motion. What we see exhibited here today is time, time in the present tense. The significance of the pieces is the process of making, of waking and walking, of walking and weaving: taking the threads of linen, wool and silk, and creating from them a composition whose beauty and value reside not only in the materials, the natural dyes, and the simple designs, but also in the concrete realization of a present time. Being and making: making in order to be.

Helen Mirra was born in Rochester, New York in 1970 and lives in Muir Beach, CA. In 2015 she participated in the 12th Havana Biennial with a month-long walking project. She also participated in the 30th São Paulo Biennial (2012) and the 50th Venice Biennial (2003). A fifteen year survey (1996-2010) of her work was presented at Culturgest in Lisbon in 2014. Major exhibitions include “Acts for placing woolen and linen” at Cample Line (2020), Thornhill SCT; “No Horizon” at the Berkeley Art Museum (2019); “Gehen, weben/Caminare, tessere” at Kunst Meran/Merano Arte (2017); “Hourly Directional” at Radcliffe Institute for Advanced Study and with Ernst Karel at the MIT List Visual Arts Center (both Cambridge MA and in 2014); “gehend (Field Recordings 1-3)”, which was held at three venues: Haus Konstruktiv, Zürich (2012), KW Institute for Contemporary Art, Berlin, and Bonner Kunstverein (both 2011), “65 Instants” at the Berkeley Art Museum (2003), “Declining Interval Lands” at the Whitney Museum in New York (2002); and “Sky-wreck” at the Renaissance Society at the University of Chicago (2001). Mirra has been awarded various fellowships and residencies, including the Guggenheim Fellowship (2020), OCA in Oslo (2007/08), DAAD in Berlin (2005/2006), and IASPIS in Stockholm (2011).