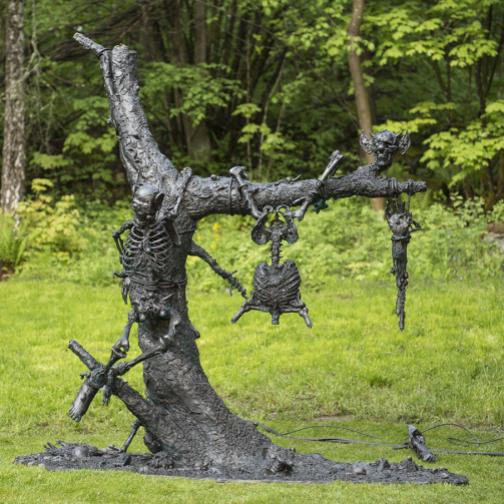 I’d like to have stepped on Goya’s toes, shouted in his ears and punched him in the face.
Jake Chapman

Sturm und Drang is one of the new acquisitions in 2015. It was created by the British artist siblings Jake (born 1966) and Dinos Chapman (born 1962). They have been collaborating since 1991, and construct an artistic universe through a number of techniques such as sculpture, print and installations. In their art, they confront contemporary subjects such as morality, religion and politics.

The piece Sturm und Drang was inspired by an etching by the Spanish artist Francisco Goya from 1863. Goya's Disasters of War was a criticism of Napoleon's aggressive warfare on Spain.

The title Sturm und Drang is the name of a German literary movement from 1770 to 1785. It was a counterforce to the age of Enlightenment. The term Sturm und Drang can also allude to a form of aggressive warfare.

The Chapman brothers want the beholder to focus on the details in this work. The artists question human nature itself, our fascination with the cruelty of strife and with death.