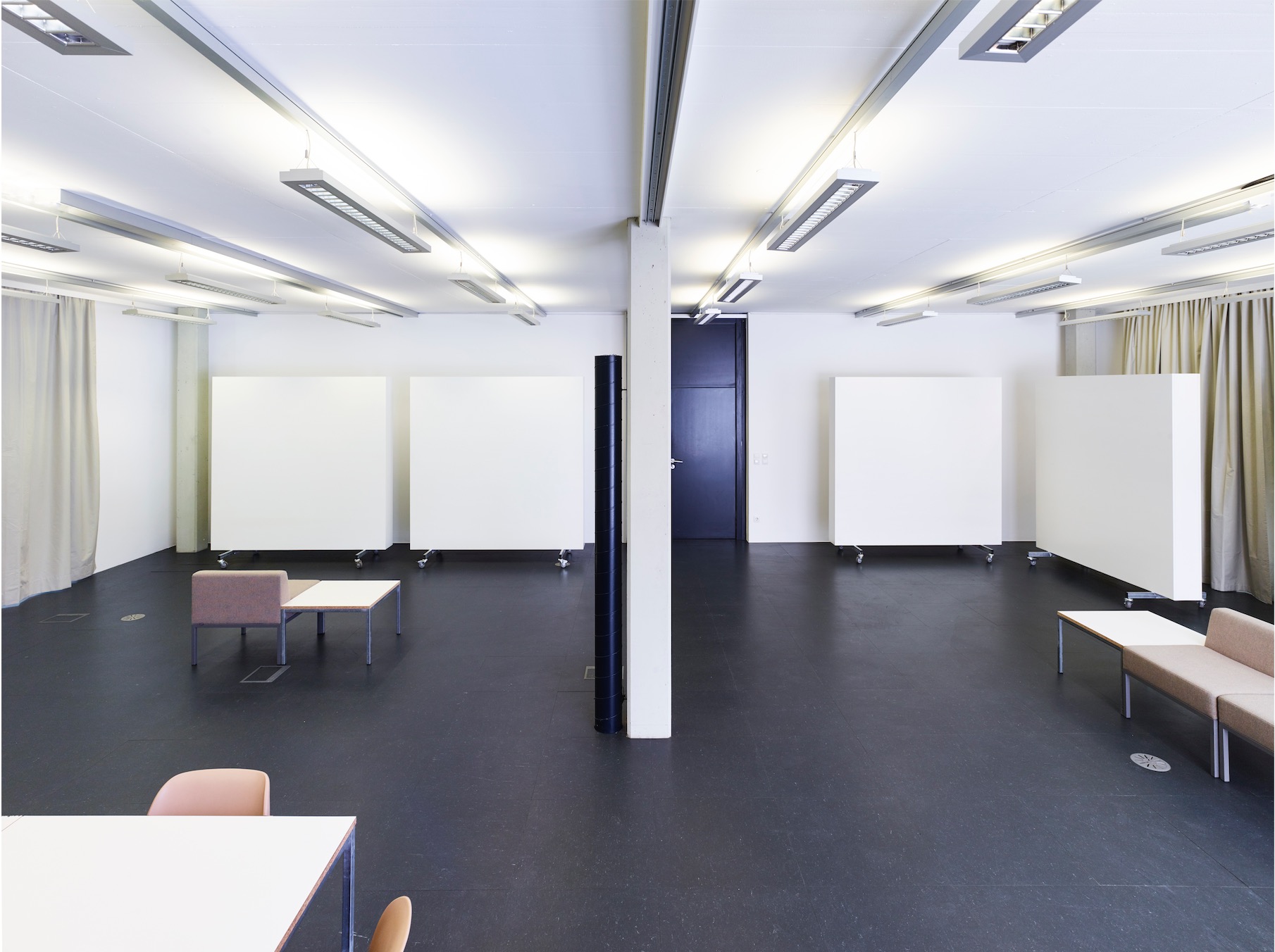 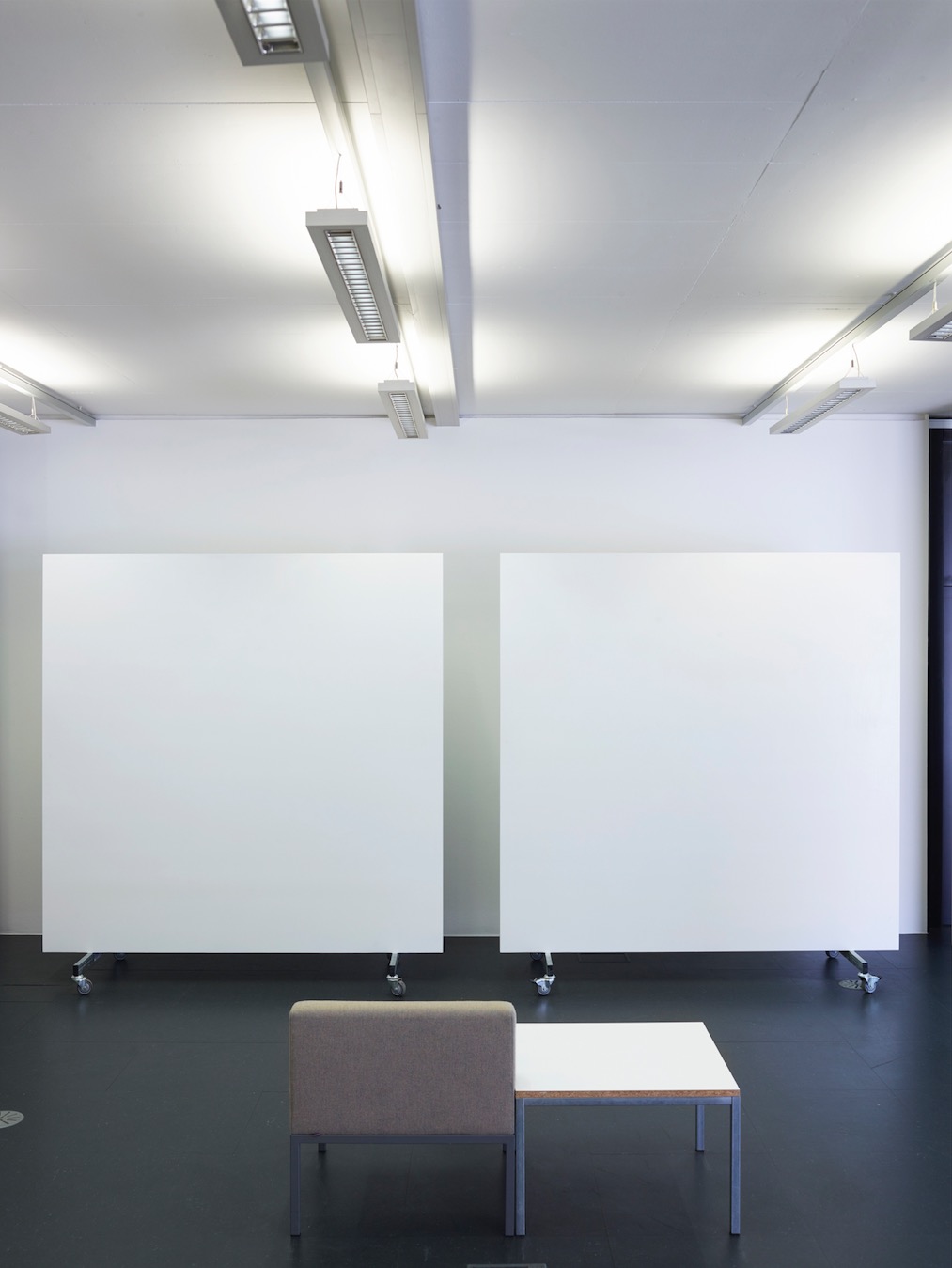 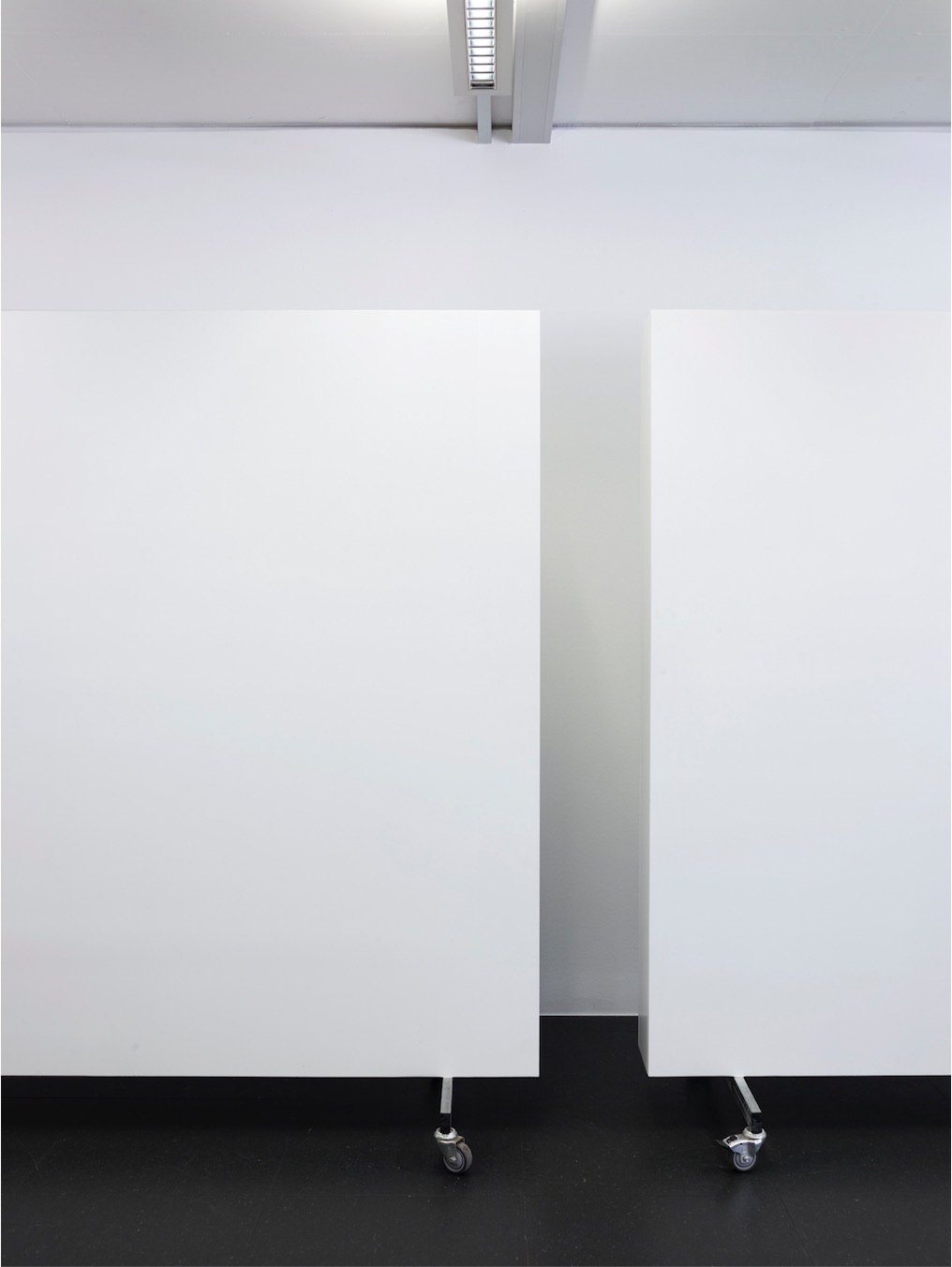 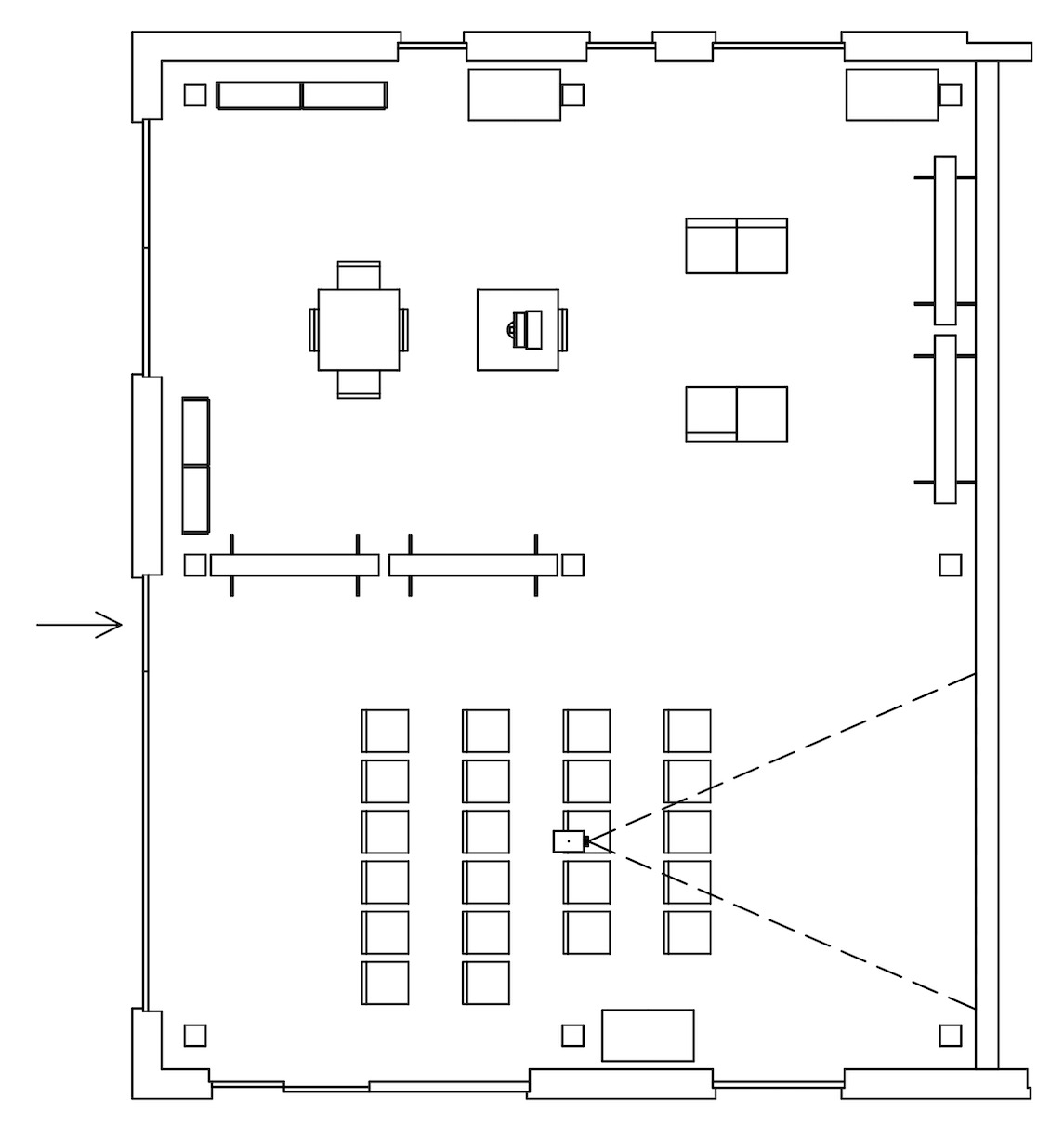 The Kunstraum art space (12 × 9.7 m) is located on the ground floor of Building 2, with a view toward Building 1 in the west, toward the university in the north, and toward Building 4 in the south. The close proximity to university facilities and to the neighboring administrative offices with their lecture hall, and especially the view of a terrace café in Building 1, guarantee the Kunstraum transparency with relation to its environment. This transparency should be used in the medium term to promote the expansion of its function out into the surrounding area. The space understands its mission to be that of a place for the establishment and accompaniment of the Lakeside Art Project. It is conceived as a venue for presentations, events, exhibitions, as a discussion platform and as a research area for the study of literature supporting the various projects. The space is also meant to be an open communication zone during operating hours. I basically tried to establish a model for functional furnishings in a dialectic with the architectonic language of the space. I see my design approach as an ironic and critical contribution to the debate on the extended concept of sculpture that is currently being expressed in significant recent examples of museum architecture.1
— Josef Dabernig, 2005

In 2005 Josef Dabernig defined the architectural and design parameters for Kunstraum Lakeside in Setting Up of Kunstraum Lakeside. With the furnishings he designed for the space, and with technical equipment and display elements such as partitions, shelves, and tables he also defined the conditions and possibilities of its use. Multifunctional, discursive, changeable, permeable, not prestigious or showy—Kunstraum Lakeside, with its interiors in technological beige and gray, is not an exhibition space in the conventional sense. It is also an exhibition space, namely whenever the respective art project requires it. Moreover, its infrastructure is designed to enable a wide variety of other event formats at the interface of technology, research, business, and not least art. The broader social conditions that lead to the overlapping of these different fields are themselves the subject of wide-ranging discussions at Kunstraum Lakeside that go beyond the realm of art. Reflections likewise extend to the spatial requirements in the modular methods and strategies of display devised by Josef Dabernig.

Today Kunstraum Lakeside continues to pursue the objectives set out by the founding curators Hedwig Saxenhuber and Christian Kravagna in their first exhibition and event program, titled Views of Economy: “to provide curatorial accompaniment to an ambitious business and research project, creating an exciting and fruitful interchange between the innovative potentials of the Lakeside Center and pertinent artistic research and analyses.” The underlying concept is for “international examples of advanced artistic production to be incorporated according to context into the functional designation, structure, and operations of the science and technology park.” In view of how today—more than 15 years after the establishment of the conceptually inflected art program—the prerequisites for business-oriented research and development have changed so radically, for example through the exponential increase in digitalization of the everyday and the automation of working life, the Lakeside Science and Technology Park offers “an opportunity for a confrontation [...] in the form of a dialogue on questions and answers regarding overlapping areas.” And it holds true, for science and technology and for artistic production, that “the intellectual and communicative challenge for both sides lies in their different methods of interpretation and forms of representation of ultimately shared social framework conditions,”2 but also, more than ever before, in their means of operation and resources.

What Josef Dabernig describes as “ironically critical” in his project for Setting Up of Kunstraum Lakeside can be identified as an inherent double strategy. The artist does indeed set up an art space and considers all possible functions of such an architectural backdrop. However, by letting the project be what it is, namely part of a technology park that works hand-in-hand with business, and by practically over-emphasizing this condition through creative means, he distances himself not only from the supporting institution but also from his own artistic practice. The philosopher Gerald Raunig refers to artistic endeavors of this kind, which make simultaneous use of the strategies of involvement and self-questioning, as “instituent practices.” They are “practices that conduct radical social criticism, yet which do not fancy themselves in an imagined distance to institutions; at the same time, practices that are self-critical and yet do not cling to their own involvement, their complicity, their imprisoned existence in the art field, their fixation on institutions and the institution, their own being-institution.”3 A double strategy conceived in this way corresponds in turn with the idea of an artistic research that develops along certain content, themes, and facts, but is always methodologically reflexive—precisely the kind of artistic research that is addressed in the program at Kunstraum Lakeside.

What does it mean for a project, for an art project such as Kunstraum Lakeside, when there is no longer a permanent work, no permanent institutional product? What does it mean for an art space when its self-definition as an institution is already questioned from the outset through an intervention by an artist like Josef Dabernig, and when instability and changeability are the agents of this questioning?4

In the jubilee year Josef Dabernig continues to balance technology, economy, and artistic research against the backdrop of an institutional-critical artistic practice. Under the title Envisioning Kunstraum Lakeside, he performs a reinstatement and restructuring of the exhibition space as he reiterates or renews the questions raised in 2005. Since 15 years Kunstraum Lakeside has served as a site for the production and presentation of contemporary international art. Located in the Lakeside Science & Technology Park in the immediate vicinity of the University of Klagenfurt, it operates at the interface of economic, scientific, and cultural discourses. In a rearrangement of the furnishings of the exhibition space and an accompanying poster edition, Dabernig sheds a new light on the history of this particular place of artistic production. “Form and Identity”, “Controlled Bodies”, “Reconstructions”, “Neighborhood”, “Close Ties”, “Media Use”, “Economic Edens”, “Borderlines of Work”, “Research”, or “Format” are the titles of just a selection of thematic focuses, which have been put up for discussion in various constellations since the opening of the space in 2005. In Envisioning Kunstraum Lakeside Josef Dabernig reconfigures these contents and transfers them to the present.

Josef Dabernig (b. 1956 in Austria) lives and works in Vienna.
www.dabernig.net