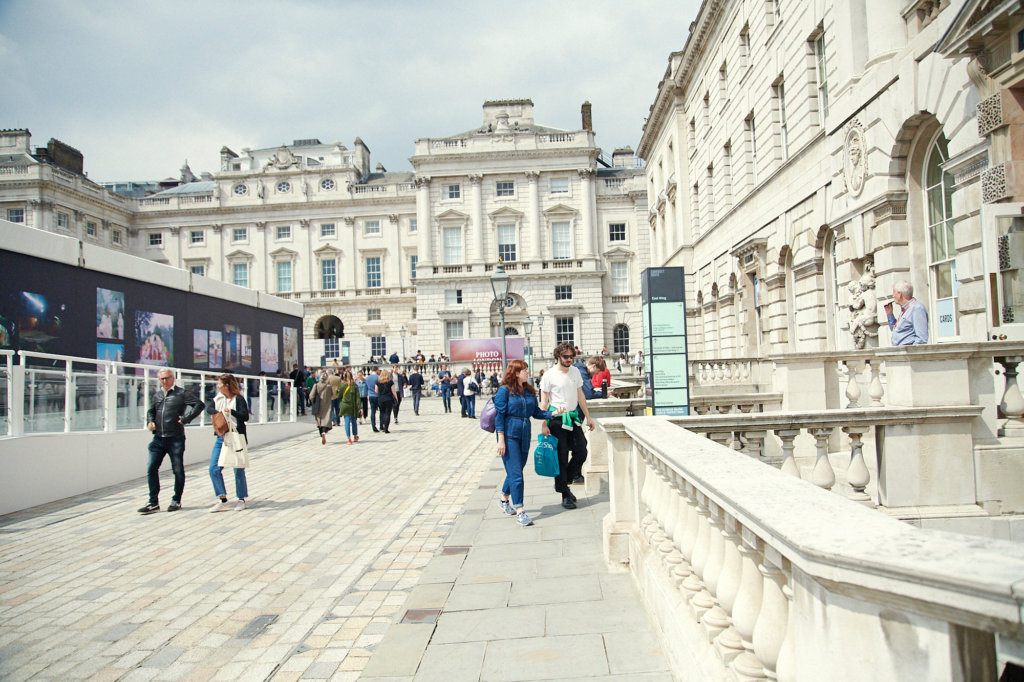 The fifth edition of Photo London closed on Sunday 19 May 2019, having seen strong visitor numbers, robust sales and major acquisitions by international institutions as well as important sales to private collectors. A record 114 exhibitors took part from 24 different countries took part in this year’s Fair and the acclaimed Discovery section featured a record 25 galleries.

Commenting on the success of this year’s edition, the Fair’s founders Michael Benson and Fariba Farshad said, “The past twelve months have not been easy mainly thanks to the toxic shadow of Brexit. Yet we have emerged stronger than ever. If anyone had any doubts that Photo London had the potential to become the world’s leading photography Fair our fifth edition has firmly laid them to rest. Given the context, this is an extraordinary achievement. Our team have travelled thousands of miles and worked tirelessly to achieve this outcome. Over the last five days the results of their dedication have been clear for all to see. We now have an outstanding platform on which to build a really exciting future.’ Philippe Garner, Chairman of the Photo London curatorial committee added, “Photo London’s fifth iteration felt to me like its best yet. It revealed photography today as a rich and diverse field of experiment and exploration, while reminding visitors of the authority of the great classic practitioners.” The 2019 Fair saw an increase in institutional attendance, with more than 90 representatives of institutions and patron circles including acquisition groups from the world’s major museums, visiting from territories that included North America, Europe, Scandinavia, Russia and Canada. Visitors included, amongst many others, representatives from: Tate; Aperture Foundation; Foam; Getty Museum; Guggenheim Museum; Jeu de Paume; National Gallery of Art, Washington DC; Rijksmuseum; Palais de Tokyo; and Victoria & Albert Museum.

Many of the participating galleries reported strong sales to new clients as well as many significant new contacts. Timothy Person’s of Taik Persons response was typical of most exhibitors, “Photo London 2019 surpassed our expectations. We were able to connect with both old and new collectors, but equally important curators as well. We sold to institutional collections from Italy, France, Germany, Finland, USA and England. Each edition grows better than the last.”

As in previous years, sales of nineteenth century photography were exceptional. For Roland Belgrave this year’s sales were even stronger than in 2018. Belgrave commented, “In a nutshell, Photo London 2019 was superb. My theme was the environment and I feel this resonated with many clients. The first day showed very strong results with both my main walls selling first. Clients I already know, from outside the EU, purchased strongly in my existing 19th century holdings. For me, sales were better than last year.”

Robert Hershkowitz also had an excellent Fair with important sales being made to major institutions and collectors. Paula Hershkowitz said, “this year was our most successful Photo London ever. The response to our photographs was very enthusiastic – our room often being described as an oasis of beauty. We made sales to more substantial collectors and institutions but also to several smaller collectors. We were particularly pleased at the number of young photography students who enthused about the works.”

In the Discovery section, new additions to the Fair, Galerie Cédric Bacqueville (France) and Galerie Peter Sillem (Germany) were amongst those reporting strong sales to a diverse range of collectors. Antoine Munch from Gallery Cédric Bacqueville commented, “This is the first time we have exhibited at Photo London and the fair has been excellent, we have been selling everyday which is really encouraging. Our sales were great yesterday, we even sold four pieces to one person, so it’s been a great platform to meet new collectors. We have been selling consistently and have had great press from France to help. We’ve had significant people from institutions come by as well and great encounters.”

Tristan Lund, curator of Discovery said, “This has been the most critically and commercially successful edition of Discovery to date thanks to the intelligent and daring curation of all 25 galleries. Not only did the section see premiers of new artistic projects by Matan Ashkenazy, Ellen Carey, Joanna Rajkowska and Edouard Taufenbach but also condensed retrospectives for artists Benjamin Deroche (H Gallery, Paris) Rad Husak (Dellasposa, London) and Marco Maria Zanin (Spazio Nuovo, Rome).”

The Luma Foundation continued its support of the Photo London Public Programme of talks and exhibitions. This year’s talks featured conversations between leading artists, curators and collectors, and attracted bigger audiences that ever before. Talks curator William A Ewing commented, “This year’s Talks Programme has given me immense pleasure to curate and judging from the feedback we have received the pleasure has been widely shared. I have no doubt that the programme will continue to enrich Photo London.”

In the exhibition programme, Stephen Shore’s Master of Photography show was a highlight. The exhibition featured a new body of work, Details, shown for the first time in the UK, alongside Shore’s series Los Angeles – a series of sixty small photographs taken over the course of a single day in 1969. Stephen Shore said, “Aside from the honour of receiving this recognition and the trill of seeing my new large-scale prints exhibited, a highlight of my Photo London experience was my talk with David Campany. We’ve known each other for years and have had many extended and intense conversations, but at our public talk something kinetic happened and we explored territory we never discussed before.”

With the successful conclusion of the fifth edition of the Fair Roderick van der Lee takes on the position of Director of Photo London. Working closely with the Fair’s Founders Michael Benson and Fariba Farshad, he will be responsible for leading the Fair’s team and for further strengthening Photo London. Roderick van der Lee said: “I’ve been particularly excited that the market at Photo London seems to have broken through more traditional collecting paths. There were younger first-time buyers, buying multiple works by well-known photographers as their first acquisition, and major institutional collections buying young photographers from our Discovery section. I am also happy to see that this year’s stricter curatorial selection and tighter presentation was met with enthusiasm by exhibitors and visitors alike, as it is a direction I wish to follow even further. All in all, this year was a great edition of a world class event, and I am eager to press on full throttle into an exciting future for Photo London.”

Jonathan Reekie, Director of Somerset House Trust, said, “Photo London has established itself as one of London’s stand-out cultural events and a much-anticipated moment in the Somerset House calendar. This was clear in the quality and breadth of artists and work, and the large amount of people it brought to the site, who really engaged with the huge range of photography on display. It’s great to see the fair grow from strength to strength.”