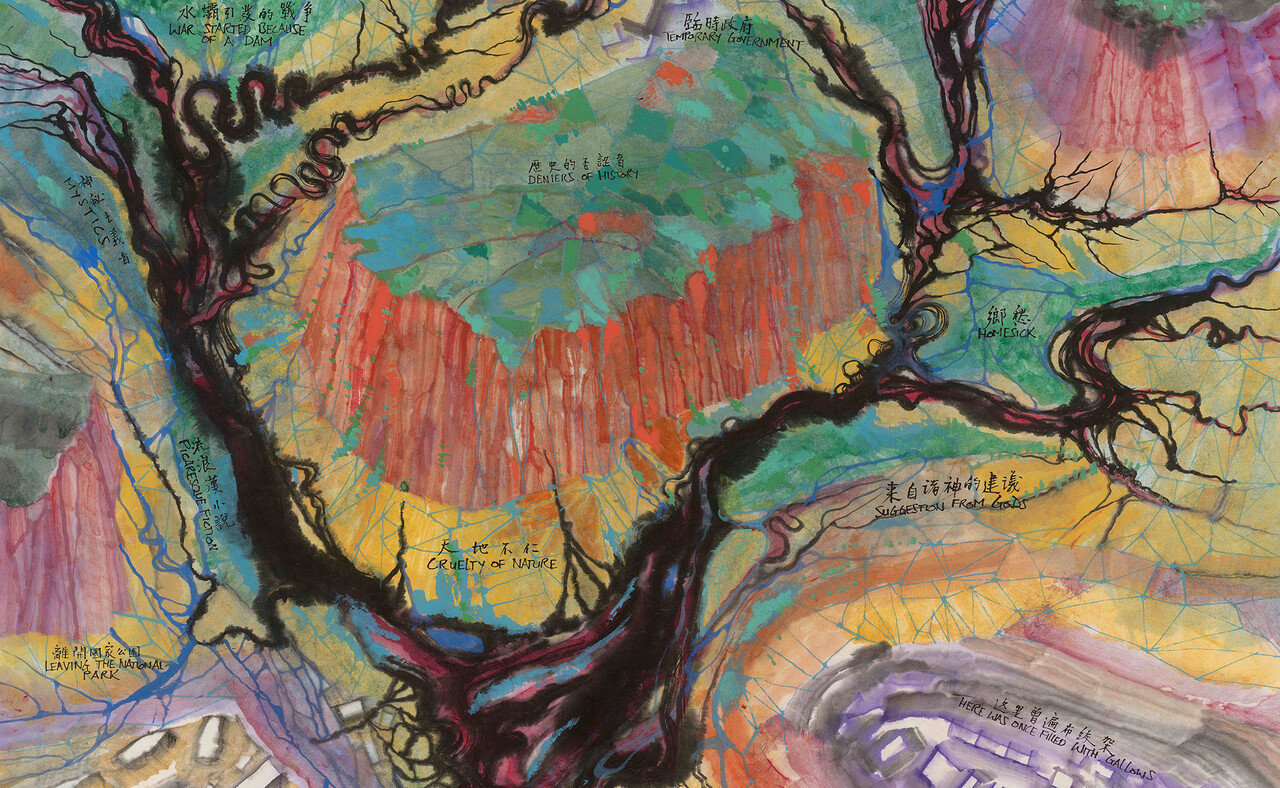 In his first solo exhibition in the UK, Qiu Zhijie (b. 1969 Zhangzhou, China) occupies the whole of Talbot Rice Gallery’s historic Georgian Gallery with new series of ink-paintings and an atmospheric installation evoking an archaeological dig. Qiu’s practice embraces calligraphy, poetry, teaching, criticism and curating and as a thinker, and cartographer he has earned worldwide critical recognition for his concept and practice of ‘total art’. Through this approach he brings together different cultures and knowledge-systems to propose alternative worldviews.

Qiu Zhijie has long been celebrated for his large-scale ink on paper paintings and sculptures of topographies, inscribed with geo-political and speculative, fictional descriptions. His body of new work will be informed by remote-sensing technology, an extrasensory imaging method that applies ‘false’ colours to interpret environmental data. Qiu’s psychedelic paintings suggest an organic, bristling geo-political reality. A series of pits inset with paper reliefs and lit with a single bulb will turn the gallery floor into an archaeological site, what Qiu calls a “palaeontological dig and a time machine of humanity”. They are realized using the centuries-old Chinese technique of padding with sponges: “It is a very advanced traditional technique,” explains the artist, “usually employed to transpose onto paper inscriptions and graphic motifs depicted on ancient vases. All the studies about traditional Chinese inscriptions on stone, jade, bronze, etc. are based on this technique. The main difference between padding and a cast is that the former is able to transform the three-dimensional into the two-dimensional, in effect to transform the world into texts.”

A major exhibition of this artist is well overdue in the UK and arrives at a time of a rapidly developing, fractious geopolitical landscape, and a return to chilling relations between centres of power, underpinned by the unsustainable dependence on the extraction and distribution of resources. Against this backdrop, Qiu’s sprawling maps, infused with logical indicators of topography as well as illogical projections of fantasy, surreal linguistic play, and philosophical provocations, represent an entangled, complicated, contradictory world which for all its diversity, is also inseparably co-dependent.

Biography
Qiu Zhijie (b. 1969 Zhangzhou, China) lives and works in Beijing. He is Vice President of Central Academy of Fine Arts and Dean and professor of the School of Experimental Art at the Central Academy of Fine Arts, and professor of the School of Intermedia Art at China Academy of Art. Major solo exhibitions include: Mappa Mundi, UCCA, Beijing (2019); Living Writing, 21st Century Museum of Contemporary Art, Kanazawa (2018), Journey without Arrivals, Van Abbe Musuem, Eindhoven, travelling to Centre d'Art Contemporain, Geneve and Lunds Konsthall, Sweden (2017-2018). He has contributed to the 56th Venice Biennale (2015); the 31st São Paulo Biennial (2014); the Göteborg Biennial (2013); the 53rd Venice Biennale, Chinese Pavilion (2009); The Real Things: Contemporary 6th Chinese Art, Tate Liverpool (2007); the Gwangju Biennale (2006); the Yokohama Triennale (2005); and the 25th São Paulo Biennial (2002). Qiu also curated the first video art exhibition in China in 1996, and, between 1999 and 2005, a series of exhibitions called Post-sense Sensibility, the purpose of which was to promote the work of young Chinese artists. In 2012 he was the curator of the 9th Shanghai Biennale.