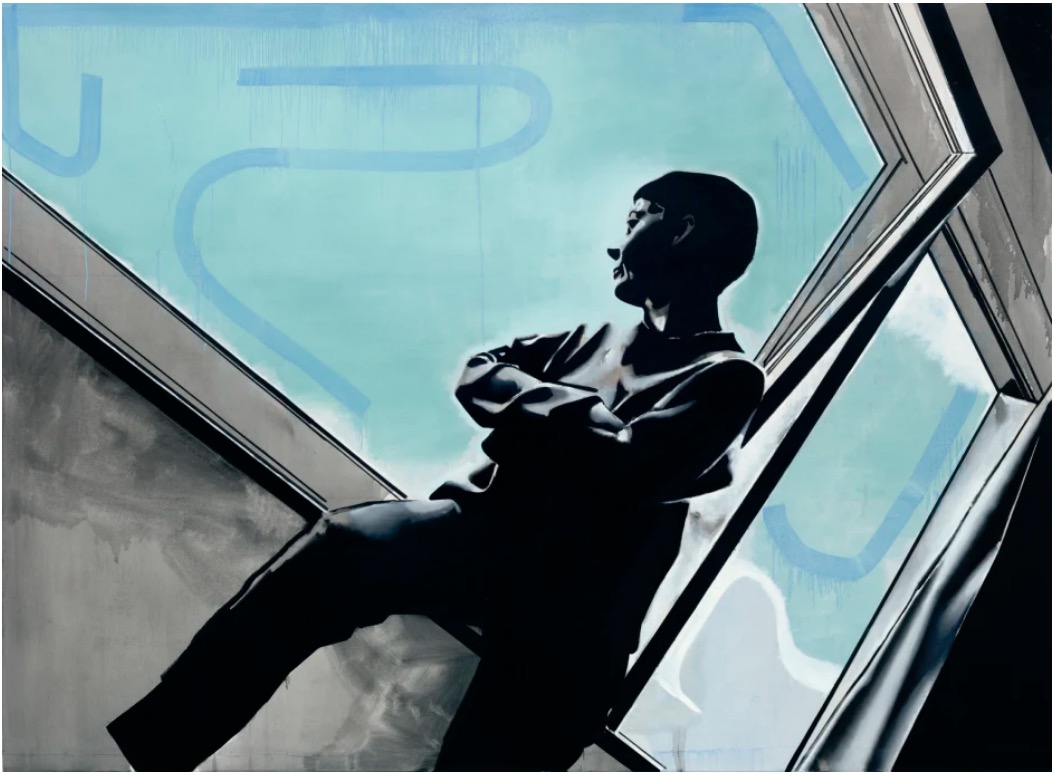 This autumn, Wilhelm Sasnal presents a group of recent paintings deriving from time spent in Los Angeles and his studio in Kraków, in which he ranges between everyday subjects and more ambiguous scenarios. Employing a variety of physical scales, his paintings alternate in focus between broad vistas and taut close-ups, translating photographic images into pictures that appear simultaneously neutral – free of extraneous detail – and charged with emotive potential.

A number of the works in the exhibition were made over the course of a residency in Los Angeles in 2019. Sasnal evokes the experience of driving along the city’s freeways – crystallizing the smooth movement of a car, and the panning views beyond its windows, into pared-down visions. One painting shows vehicles spreading out in a lateral formation across the broad blank of a road, in a scene that highlights the dynamic between the artist’s personal space (inside the car, bounded by the windscreen) and the impersonal, rapid-moving world beyond.

Sasnal often oscillates in this way between the personal and the apparently anonymous. Distance and nearness become ambiguous quantities. One series of paintings depicts sections of freeway – either a silhouetted overpass or receding lanes of traffic – glimpsed through a wire fence. The interlinking segments of fence slice across the pastel hues of the views beyond, suggesting the immediate physical territory of the onlooker (the artist gazing through the porous screen of the fence) in a way that subtly accents the subjectivity of Sasnal’s imagery: the mediating presence of the artist, the camera, the paint.

The linear structure of the fencing echoes a motif running through much of Sasnal’s work: sinuous lines, whether representational or abstract, frequently traverse and divide the space of his pictures. The complex form of a collapsible bike is captured in Brompton (2019) as a condensed array of lines and circles, while in two large-scale canvases, the line becomes the governing motif, without a pictorial referent, looping and re-crossing itself against a concrete-grey ground or against a series of large black orbs. Often, Sasnal’s lines seem to waver between the status of two-dimensional pattern and three-dimensional form. As the curator Kasia Redzisz has observed, “Sasnal’s painting … employs abstraction as a method of representation, which enhances its narrative aspect. Seemingly marginal, abstraction intensifies Sasnal’s storytelling by creating space, where the act of seeing takes place and the viewer’s response comes into play.”

Throughout his latest works, Sasnal hints at the capacity for dualisms – abstract and figurative, panoramic space versus intimate proximity, or personal subjects versus anonymous ones – to blur together. Concepts of distance and nearness are evoked and upended in a painting of a faraway plane, flanked by the straight vertical edge of a nearer building, that is simply titled Kacper – the name of the artist’s son. The ambiguity of the picture is heightened by the perfect horizontality of the plane. It might be levelling out from its ascent, or coming in to land.

Apparently mundane spectacles acquire a sense of symbolic or emotional resonance, simply by virtue of having been captured and re-presented as fragments of the artist’s experience: a windblown plant against a pink sky, the iron spikes of a gate, a blanched cactus, or the distant view of the white cliffs of Dover – a simple white strip bisecting a scene of blue sea and sky. This last image suggests both an imminent arrival and a departure – a relationship of decreasing or growing separation; the cool vacancy of the image is intensified by the year of the painting – 2016, the date of Britain’s decision to leave the EU.

Coinciding with Wilhelm Sasnal’s exhibition at Sadie Coles HQ, Rizzoli Electa will release a new in-depth monograph exploring the artist’s practice to date, showing his emergence as one of Europe’s preeminent contemporary artists over the past two decades. The significant new volume will feature contributions by Pavel Pyś, Brian Dillon, Kasia Redzisz, Andrzej Przywara and an introduction by Adrian Searle.

Wilhelm Sasnal (b. 1972, Tarnow, Poland) has had solo shows throughout Europe and the USA including those at the Kistefos-Museet, Jevnaker, Norway (2018); Lismore Castle Arts, Ireland (2013); Haus der Kunst, Munich, Germany (2012); Whitechapel Art Gallery, London (2011); K21, Düsseldorf, Germany, and Centro De Arte Contemporàneo, Málaga, Spain (both 2009); Wilhelm Sasnal - Years of Struggle, Zacheta Narodowa Sztuki, Warsaw (2007, travelling to Galleria Civica di Arte Contemporanea, Trento in 2008, and Sara Hildén Art Museum, Tampere in 2010); Matrix, The Berkeley Art Museum, Berkeley, California (2005); and Kunsthalle Zürich, Switzerland (2003). He was included in the XXVI Bienal de Sao Paolo, 2004, and was shortlisted, with four other finalists, for the 2004 Vincent Prize at the Stedelijk Museum, 2004. With Anka Sasnal, the artist has written and directed four feature-length films, Huba (2013), It looks pretty from a distance (2011), Fallout (2010), and Swineherd (2009).