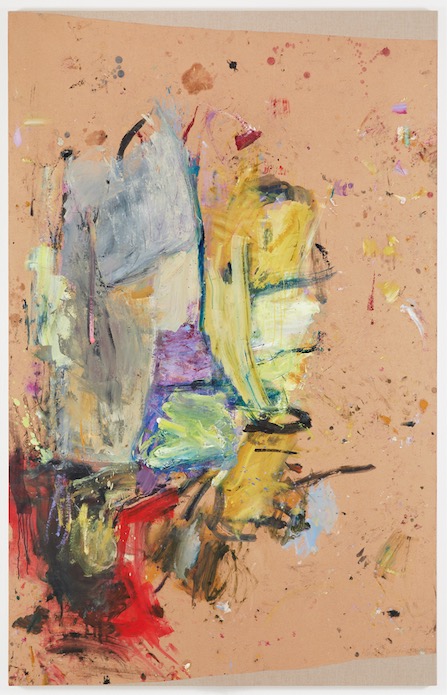 Landscapes, portraits, Goya’s Maja, animals, plants, witches, and Lady Gaga, a house, or just a group of written characters, some of which are from antiquity or the time of the pharaohs—Martha Jungwirth’s painting is enormously diverse. Often these subjects appear in an empty field, in an endless space. She uses special grounds for her paintings such as brown paper, cardboard, or even lined paper: surfaces that suggest a story, as do her historical subjects from Greek mythology and art history. And yet, in her work everything is “a spot is a spot is a spot, an intelligent one or a stupid one, nothing else,” as she once said.

Martha Jungwirth (b. 1940 in Vienna) occupies a singular position in Austrian painting with her poetic, abstract watercolors and oil paintings and her gestural style of painting. From 1956 to 1963 she studied at the University of Applied Arts Vienna, and she initially exhibited along with five male colleagues in the artist group Wirklichkeiten. In 1977 she was invited to participate in documenta 6. After these early successes, for decades she was largely overlooked or ignored by the art world. Since her discovery by Albert Oehlen in 2010, international interest in her works has grown.

Today Martha Jungwirth is indisputably the leading representative of the generation between the Viennese Actionists and Franz West, whose studio she took over. Over the past six decades, the artist has developed a unique approach to abstraction based on the body and a precise perception of the world around her. It combines power and concentration with exuberance and emotion. The compositions reveal themselves to her during the painting process, which she describes as an “adventure.” They occupy an intuitive space that exists beyond the formation of recognizable images. In the interaction with her materials, she creates works between chance and calculation.

Martha Jungwirth’s work is an enormous enrichment to and expansion of a field of research on painting, especially for the city of Düsseldorf with its art academy and numerous art-historical links to the past and present of painting. The spaces at the Kunsthalle Düsseldorf make it possible to present her extraordinary, large-scale works, some of which are up to nine meters long, on this scale for the first time. After all, despite her importance for Austrian art history, the artist, who was awarded the Grand Austrian State Prize last November, has not yet become well known to a broader audience in Germany.

The exhibition is showing round about 80 works by the artist. It was curated by Gregor Jansen and Alicia Holthausen in close cooperation with Martha Jungwirth.

The exhibition is supported by the Ministry of Culture and Science of the State of North Rhine-Westphalia.